As smuggling to Syria continues and amid the collapse of the local currency, the Lebanese people are paying the price amid fuel shortages. 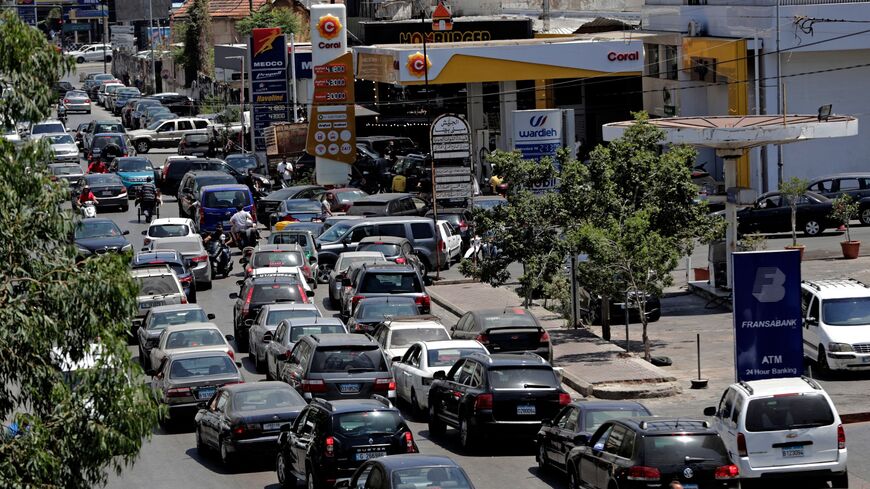 Vehicles line up for fuel at a gasoline station in Lebanon's capital, Beirut, on June 11, 2021, amid severe fuel shortages. - ANWAR AMRO/AFP via Getty Images

BEIRUT — It has been over a month since Lebanese drivers began lining up in their cars for hours to get gasoline amid fuel shortages. This has added to the many crises the Lebanese are already undergoing, leaving them even more wary about their future.

It has become commonplace to see long lines on streets near gas stations and cars stopped along the road because they had run out of fuel. Meanwhile, plastic tanks that had been filled with gasoline and stored in homes have caused fires in residential areas, and there has been at least one incident where a car caught fire, at airport parking June 17.

Gas station workers have become the targets of almost daily attacks, and some stations have closed or only open in the early morning hours, while others have chosen to ration fuel so that more customers can at least get some gas.

A black market has merged where gas and diesel are sold at high prices, and some workers have accepted bribes from drivers seeking extra fuel.

Security forces have been deployed at many stations due to incidents that have resulted in death and vandalism. One person was killed in a shooting triggered by the fuel shortage in the town of Benin, in Akkar in northern Lebanon. In Tyre in southern Lebanon, the gas pumps were damaged at one station. One person even removed the gas pump hoses to force workers to fill up his car.

Officials in the hydrocarbon sector said the crisis is due to the lack of dollars at Lebanon’s Central Bank to import fuel. In the past weeks, the importation of fuel has become limited and is not meeting the market need. Smuggling of fuel to Syria has also caused depletion of the country's fuel stocks.

The Central Bank supports the importation of fuel by paying 90% of its price at the official exchange rate of 1,515 Lebanese pounds to the dollar, and the remaining 10% is secured by importers in dollars from the black market, where the value of a dollar surpassed 15,000 pounds this week.

Central Bank Governor Riyad Salameh has repeatedly warned that subsidies for basic commodities will end when the bank's mandatory minimum reserve of $17 billion is reached and called on the government to rationalize subsidies.

The Lebanese people are afraid the fuel crisis will worsen and that there will be an increase in clashes and the use of guns at gas stations. Fears of crime and killings have grown; one big fear is that if fuel subsidies end and prices increase even more, many people will not be able to afford to use their vehicles.

Lama Hashem, 29, a Lebanese housewife and mother of two, told Al-Monitor, “I have grown scared of going to the gas station, because a brawl might erupt and we might be killed by a stray bullet. When I have to go to the gas station these days, I do not take my kids with me. What’s worse is that we will no longer be able to buy fuel when subsidies are lifted.”

Lebanon has been struggling with the worst economic and monetary crisis in its history. Its national currency against the dollar has collapsed, and more than half of the population has become poor.

On June 17, caretaker Energy Minister Raymond Ghajar announced that fuel subsidies will be lifted eventually and that the price hike will lead to a drop in fuel demand.

Ghajar said, “Those who cannot pay 200,000 Lebanese pounds [about $132 at the official rate or about $13 at the black market rate] for a tank should stop using a car and use something else.”

Ghajar’s statement raised the ire of many Lebanese who saw it as a disregard for the magnitude of the crisis, as there are few alternatives available. There is no reliable public transportation network, as public buses are considered unsafe and disorganized; the majority of people commute using their own cars. The use of cabs is a possibility, but their fares will undoubtedly have to rise due to the high price of fuel. The cost of transportation could rise beyond the ability of a large segment of Lebanese workers, who are generally low paid; the minimum wage is now the equivalent of $50 a month at the black market rate.

Lebanon has a railway network, but its trains are rusty and dilapidated and the system has been considered to be defunct since the 1990s.

Ahmad Tamer, director general of the Land and Maritime Transport Directorate, told Al-Monitor, “I believe people’s concerns are justified. In order to improve public transportation, there must be cooperation with the private sector to implement a plan and conduct studies.”

Recently, many people have replaced their cars with motorcycles and others with tuk-tuks (small three-wheeled vehicles) because they consume less fuel.

Hadi Sahaaban, 24, a university student who works as a security guard in Beirut, told Al-Monitor, “I replaced my car with a motorcycle because of the fuel shortage. My salary is 1 million Lebanese pounds [about $66 at the black market rate] per month, which will not be enough to fill up on gasoline if the subsidies are lifted.”

George Brax, a member of the Syndicate of Gas Station Owners, told Al-Monitor, “There are two basic conditions for the availability of fuel at the stations. First, the Central Bank must secure fuel imports constantly and continuously, and second, the government must ensure delivery of fuel directly to the stations. Otherwise the crisis will not end.”

Currently, distribution companies distribute the fuel to gasoline stations, but large quantities are being smuggled to Syria.

Brax said, “Lebanon consumes an average of 6 to 7 million liters of gasoline per day.”

He added, “The last proposal of the Central Bank governor was to adopt the rate of 3,900 Lebanese pounds for the dollar in subsidizing fuels by 100%, instead of adopting the 1,515 rate to pay for 90% of the fuel prices. The price of a can of gasoline would then range between 60,000 and 65,000 Lebanese pounds.”

Brax considered this proposal a positive step toward a temporary solution to the fuel shortage crisis, and which many Lebanese see as a better option than lifting subsidies entirely on fuel. But others see it differently.

Economic expert Jean Tawile told Al-Monitor that this proposal “will not solve the fuel shortage crisis as long as smuggling continues and the state is unable to control the distribution of fuel and limit it to the local market. According to Aurore Feghali, director general of oil facilities, 30% to 35% of fuel imports are smuggled to Syria, which explains the shortage in the Lebanese market. Fuel imports increased by 10% in 2021 compared to the same period in 2019, according to the Central Bank governor, and we did not have a fuel crisis at that time.”

Tawile said, “The longer it takes to solve the problem, the greater the cost will be. Thus, the Central Bank will use the remaining mandatory reserves.”

Tawile added, “Ending the crisis requires stopping the wrong subsidies' policy, and supporting families in need with the help of the international community by providing ration cards so that they can buy their basic needs, including fuel. This would end smuggling because fuel prices in Lebanon will rise and equal prices in Syria. Therefore, they will not be smuggled or stored.”

Until now, there are no clear prospects for resolving the crisis, and cars will likely continue to line up at gasoline stations for a while, Tawile said.