Amid the devastating economic crisis and the deteriorating living conditions in Lebanon, many have replaced their vehicles with tuk-tuks to run errands, work or deliver goods. 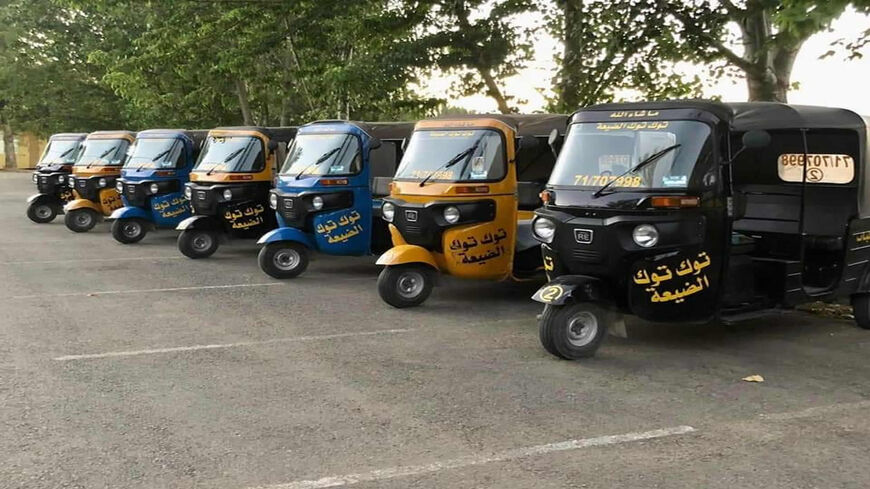 BEIRUT — Tuk-tuks, or three-wheeled rickshaws, have become an increasingly common sight in some of Lebanon's streets, especially in overcrowded neighborhoods, and the countryside as a new means of transportation.

Amid the economic and financial crises that have been gripping the country since the end of 2019, and the collapse of the local currency as well as the explosion of prices, many Lebanese have been seeking a source of income with a little capital.

Many have opted to own a tuk-tuk, which costs between $1,000 and $2,500 for transportation and work purposes.

“I bought a tuk-tuk two years ago for $1,500. I use it to drive in and around the southern suburb of Beirut to collect and buy metal scrap from people and to transport goods. The tuk-tuk has become the only source of income for me and my family. It does not use gas as it has a rechargeable battery. Many people I know own tuk-tuks now,” Nasser al-Ahmad, a young man in his 20s, married with a daughter, told Al-Monitor.

Tuk-tuks are distinguished by their small size, fitting three passengers in addition to the driver. It does not consume gas and can be driven through narrow streets and neighborhoods that cannot be accessed by cars. Tuk-tuks are eco-friendly since they are electrically charged and are seen as the best means to transport goods in traffic jams.

Tuk-tuks first emerged in Lebanon nearly four years ago, when the first vehicles appeared in popular markets and poor neighborhoods in Beirut’s southern suburbs, in districts such as Ouzai, and Rehab, as well as in the city of Tripoli in northern Lebanon, in the Bab al-Tabbaneh and al-Haddadin neighborhoods, and the old market. These rickshaws have been mainly used to transport and deliver goods.

Today, hundreds of tuk-tuks are seen roaming the streets in different Lebanese areas mostly in the countryside, notably in the Bekaa Valley and Beirut’s suburbs. They are used as stalls to sell coffee and food, and to transport goods. They even replaced in some areas taxis given their cheap transportation fares compared to regular vehicles. Tuk-tuk drivers charge between 2,000 and 3,000 Lebanese pounds ($1.30 and $2) for a ride, compared to 4,000 Lebanese pounds ($2.60) charged by taxi drivers. Others have been driving them instead of their car.

The prices of public transportation have increased in the past year due to the ongoing economic crisis. Meanwhile, prices of gas are increasing daily in Lebanon mainly due to the rise of global oil prices. But it is also due to the fact that gasoline distribution companies must cover 10% of the prices of oil derivatives in hard currency (dollars) available at the black market, where the Lebanese pound has reached more than 12,500 to the dollar. The central bank covers 90% of the price at the official rate of 1,515 pounds. The Lebanese have been struggling to fill up their cars, as gas stations are rationing fuel or closing down under the pretext of the lack of quantities available.

Kamal, who owns a tuk-tuk in the Bekaa Valley in eastern Lebanon, told Al-Monitor, “Since the outbreak of the coronavirus pandemic and the ensuing crisis, I was jobless until I bought a tuk-tuk, which is now my only source of income like many young men in the area.”

Bilal Abu Haikal, who owns, with two other partners, a company for delivery of goods and transportation of individuals, told Al-Monitor, “In the Bekaa Valley alone there are around 1,200 tuk-tuks of various shapes and types.”

He said, “I established the company with my two partners in February 2020, headquartered in Barelias [in the Bekaa Valley]. Back then, tuk-tuks were very few and I did not expect their number to grow this fast. Our company currently has eight tuk-tuks, and we have expanded our business and we are now delivering not just in Barelias but also to neighboring towns such as Chtaura and Zahle."

Abu Haikal noted, “The demand for tuk-tuks is a good thing at this time. Previously we used to charge 1,000 Lebanese pounds [$0.60] for a delivery ride. Today we charge between 2,000 and 3,000 pounds [$1.30 and $2] for transportation to nearby places or delivery of any goods. For farther places, the fares can go up, but they remain cheaper than the fares of a cab, a van and pickup truck given the high prices of fuel and living conditions, and other expenses for regular vehicles such as oil change and spare parts.”

Jihad Mitta, founder of Maita Motors, and one of the agents of the Italian company Piaggio in Lebanon, told Al-Monitor, “The demand for tuk-tuks has increased in the last seven months, as these rickshaws are being used as local taxis in neighborhoods and for restaurant deliveries.”

He noted, “I used to import the most expensive motorcycles, but at the end of 2020 I stopped doing that and started importing tuk-tuks from Piaggio. The price of a tuk-tuk ranges between $2,300 and $2,500 pounds paid in hard currency [dollars]. When the dollar trades below 12,000 pounds, the demand for tuk-tuks becomes higher as most customers pay with the local currency."

The Lebanese are increasingly opting for tuk-tuks to transport goods or even for their personal transportation.

Ahmad, a young man in his 30s and a resident of Sad al-Bouchrieh area in Beirut, told Al-Monitor, “Tuk-tuks are faster and more affordable. They have been abundant in the past two years. You can’t go through Bourj Hammoud [neighborhood in Beirut] without seeing people driving tuk-tuks.”

Many believe that the increasing use of tuk-tuks reflects the declining living conditions in Lebanon and a new lifestyle for the Lebanese, especially since these vehicles are used in overcrowded and poor countries such as Pakistan and Bangladesh. Many take a dim view of the country’s current situation.

Jean Tawil, an economist, believes that the tuk-tuk reflects the Lebanese resilience and the ability to adapt to a new reality and to resist the economic collapse.

“The Lebanese are currently resisting and trying to survive by finding alternatives for survival. For many their lifestyle has changed drastically. But that does not mean that they have to accept this new status quo. On the contrary, they are creating solutions to overcome this stage. The biggest [political] junction they are looking at is the upcoming parliamentary elections and chosing a new political power that is competent and has the will to make a change in the policy that led to this collapse,” Tawil told Al-Monitor.

“Lebanon has become a poor country regardless of the tuk-tuks roaming its streets or not. It will only get poorer with the end of subsidies on basic goods. What matters now is to work toward building a new productive economy instead of our rentier one,” he concluded.