Tuk-tuks to the rescue in Iraqi unrest

Iraqis disdained tuk-tuk drivers and their vehicles until their volunteerism during the ongoing anti-government protests made them national heroes. 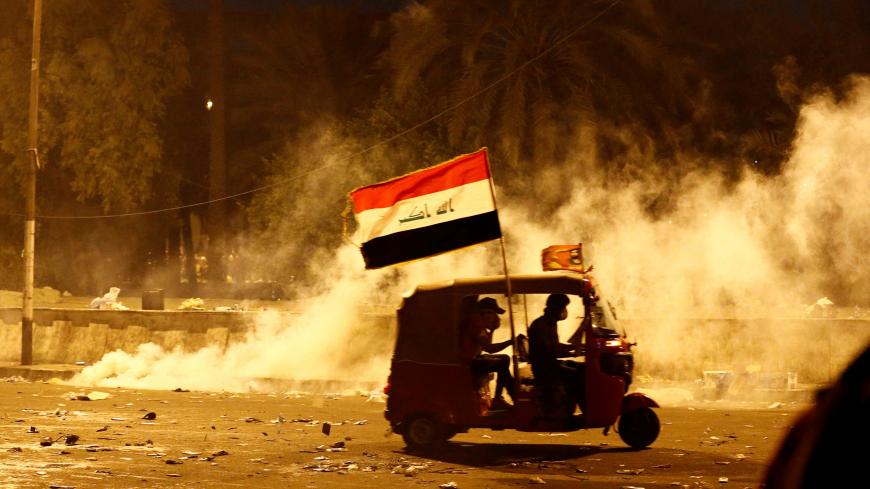 Iraq’s battered tuk-tuks have long been a symbol of the country’s poverty, and the reputation of the men who typically drive them was that of an uneducated bunch of toughs working illegally, including without driver's licenses, and putting lives at risk. The ongoing anti-government protests have radically changed the image of the motorized rickshaws and their erratic drivers.

The tuk-tuk — a cheap, often disdained alternative to taxis — crept into international headlines by substituting for ambulances at protests and in the process turning their drivers into national heroes for risking their livelihoods and lives to shuttle wounded demonstrators to hospitals. On one occasion, on Oct. 30, a beaten up tuk-tuk served as a unofficial diplomatic vehicle, delivering UN special envoy Jeanine Hennis-Plasschaer to the scene of a major protest in Baghdad.

Graffiti on a wall in the Iraqi capital underscores the role of the rickshaws in the protests that erupted last month, proclaiming, “It is a tuk-tuk revolution.”

A recent article in the Washington Post trumpeted, “Suddenly, there’s nothing cooler in Iraq than to be a tuk-tuk driver — one of the valiant and honorable men risking their lives as they whiz through tear gas and bullets to rescue injured protesters and ferry them free of charge to hospitals or ambulances that cannot reach the crowds.”

“[The tuk-tuk’s role] goes beyond providing protesters with a means of transport, bringing them food and drinks and to providing logistical support,” Mustafa Bassem, a demonstrator, told Al-Monitor. “The protesters feel reassured about the large number of tuk-tuks that save the lives of people.” In a show of respectful gratitude, he said he had posted a photograph online of a convoy of tuk-tuks at the funeral of a man who had died in the protests.

Salam Smeasim, an economics expert and former adviser to the Prime Minister's Council, cited the tuk-tuk drivers' age and unemployment as factors behind their involvement in the protests.

“They are young — ages ranging between 15 to 30 — and 47% of them are unemployed according to the World Bank and the Ministry of Planning,” Smeasim told Al-Monitor. “These young people rushed to the protests because they feel they have nothing to lose. They have fallen prey to the widespread poverty in a country where only a few people are rich due to poor governance.”

Smeasim added, “Poverty has turned the lives of people upside down,” explaining that poverty, rather than ideology, has driven people into the streets.

Ahmed al-Dahabi, a social researcher at the University of Baghdad, told Al-Monitor that tuk-tuk drivers' role in the demonstrations had created a sense of pride among them and content in the way they are treated.

“They now rush to the protests as soon as they wake up,” he said. “[If their tuk-tuk gets damaged in the demonstrations], there are many people who want to give them cash donations or garage owners who repair it for free.” Indeed, in a video posted to YouTube, a woman is shown giving a young tuk-tuk driver $700 to buy a new vehicle after his was destroyed by fire in the protests.

Ali Hassan, a tuk-tuk driver from Baghdad's impoverished Sadr City, goes to the protests every morning to help out. “A lot of people have been killed in those demonstrations,” he lamented.

Hassan, who does not have a driver's license, dropped out of school and became a tuk-tuk driver, working from the early morning until 7 pm, earning around $15 a day. After the demonstrations began, he devoted himself to lending full-time assistance to the protesters.

“Tuk-tuks can provide cheap transport for the demonstrators,” Hassan said. “They can pass through narrow streets, and they are easily repaired if they take a blow.”

On an average day in Baghdad, tuk-tuks can be found scattered around the commercial centers of Shorja and Jamila, on al-Kifah Street, al-Jumhuriya Street and al-Khulani Square, waiting to transport purchased goods and shoppers.

Ali al-Bayati, a member of the board of the Iraqi High Commission for Human Rights, told Al-Monitor that the effectiveness of tuk-tuks illustrates how Iraqi people come together in times of crisis.

“Tuk-tuk drivers are keen to offer help despite their poverty because they have nothing else to offer to the demonstrations,” Bayati remarked. “Tuk-tuks have compensated for the failure of the Ministry of Health to send ambulances at the required speed and in sufficient numbers to the heart of the demonstrations.”

Bayati sees the tuk-tuk as the undisputed symbol of the protests, which he described as “an expression of the ability of the crushed class to find means to make their voices heard and bring about change.”