Though millions of Egyptians rely on cheap and versatile auto rickshaws to get around, the government has banned the mini taxis in several Cairo neighborhoods after efforts to regulate them failed. 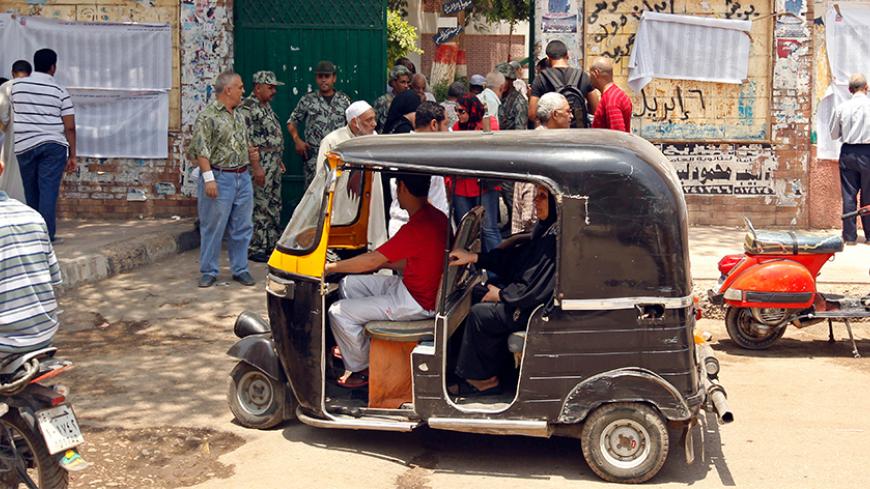 Security stand by as a local tuk-tuk taxi arrives outside a polling station in Cairo, June 17, 2012. - GETTY IMAGES/Mohammed Abed

CAIRO — The tuk-tuk is a three-wheeled passenger motor vehicle with no doors. It can accommodate three people, sometimes four if one of the passengers sits next to the driver.

This three-wheeler is an essential means of transportation for 30 million Egyptians who use it on a daily basis. Around 500,000 tuk-tuks circulate in the Egyptian streets and 1.5 million citizens work as tuk-tuk drivers, according to the first official study, “Tuk-tuk is a development opportunity,” prepared by the N Gage Consulting firm in January 2015. The study will be submitted to the Egyptian government in early September to discuss the economic and social impact of tuk-tuks on Egyptian society.

The cultural presence of the tuk-tuk has expanded, and now has its own Egyptian-style rap songs, characterized by loudness and often unintelligible lyrics.

The tuk-tuk offers several advantages. It is a low-cost means of transportation — cheaper than taxis — that can reach narrow streets regular means of public transportation cannot reach, and offers many job opportunities.

Yet, the Egyptian authorities are currently cracking down on these vehicles over concerns of security and traffic congestion. Tuk-tuks have been recently used to commit crimes such as robberies and kidnappings, convenient for such things as they are not registered and cannot be tracked down.

While drivers did not abide by the ban, Said stressed in an Aug. 17 statement that the move would be firmly implemented in coordination between the administrations of concerned neighborhoods, the police and the Cairo Traffic Public Administration, and that tuk-tuks would be seized in case of violation.

According to the statement, seized tuk-tuks would by released only after drivers paid a fine of 1,500 Egyptian pounds ($191) and pledged not to drive in banned areas. If drivers are discovered driving again in banned regions, the statement added, the three-wheelers would be permanently confiscated.

Said pointed out that the ban will be gradually applied in other neighborhoods as a second step toward full implementation in all of Cairo's streets.

In this regard, head of the Egypt Traffic Safety and Technology Association Adel al-Kashef told Al-Monitor, “The decision to limit the use of tuk-tuks is a right decision. Ever since the import of tuk-tuks from India started in 2001 — mainly in al-Sharqia governorate, where roads are narrow and transportation is not always available — the residents began using them.”

He said, “Certain controls have been imposed on tuk-tuks, as the governorates were tasked with the registration process and tuk-tuks were not supposed to be used on main streets and highways. But these controls and the amended traffic law of 2014 have not been abided by, leading to traffic disruption in Cairo — whose streets are already full of vehicles, and there are only 8.5 meters of asphalt for each car.”

Kashef explained that in addition to traffic congestion, the tuk-tuk also has serious repercussions on public security. He reiterated that the vehicles can drive between cars and in narrow alleys, which has led to its use for robbery, kidnapping and rape purposes. There is also no way to track down the three-wheelers to find the vehicle owners and the perpetrators of crimes.

“The 2014 Egyptian traffic law explicitly stipulates that any motor vehicle or motorcycle must be registered, and allowing the import of tuk-tuks without such records is considered a clear blunder by officials,” he added.

The importation of tuk-tuks requires the approval of several parties, such as the Ministries of Finance, Industry, Interior and the customs department. Prominent political leaders have been involved in the importation process, such as when former President Hosni Mubarak adopted the tuk-tuk importation project as part of his 2005 election campaign as a means of solving the transportation crisis in Egypt.

Kashef pointed out that issuing licenses for tuk-tuk drivers has to be accompanied by certain controls, such as banning their use in main streets and highways, providing for the safety of passengers, and requiring driving and medical tests to make sure drivers are not on drugs.

For his part, traffic and bridges consultant Hisham Arafat told Al-Monitor that the tuk-tuk can only be banned once another means of public transportation is provided to the middle class. No such service is currently available.

Arafat added that the main use of the tuk-tuk is to reach places that regular transportation means cannot reach. Egyptian women use the tuk-tuk to transport vegetables and gas cylinders instead of using high-cost taxis. A round trip in the tuk-tuk does not exceed a distance of two kilometers (1.2 miles), and these vehicles consume a small amount of fuel compared to the rest of the vehicles.

Arafat pointed out that the “problem does not lie in the tuk-tuk vehicle itself, but in its method of use. One cannot deny that these three-wheelers play a leading role in the villages and unpaved hamlets where neighborhoods are usually narrow and no means of transportation is available for citizens. However, these vehicles have counter effects in high-end areas and neighborhoods where streets are usually wide and paved. In such areas, various means of transportation are available for the people, and many of them own cars. Some families in these areas even own three cars. Therefore, the presence of the tuk-tuk in these neighborhoods leads to increased traffic congestion and road accidents.”

For his part, Magdi Salah Eddin, head of the Construction and Roads Department in the faculty of engineering at Cairo University, told Al-Monitor, “The delay in granting tuk-tuk licenses following the approval on their importation — tuk-tuks were driven on the roads without licenses from 2001 to 2014 — led to the squandering of billions of pounds. Tuk-tuk vehicles get gasoline at subsidized prices while their drivers pay no taxes or fees.”

The use of the tuk-tuk should be limited, not banned. This vehicle is used by millions of workers, including drivers, technicians and merchants, not to mention the millions of Egyptian families who use it on a daily basis.