Amid plans to lift subsidies and private universities’ decision to raise tuition fees, the Lebanese people continue to suffer under the country’s crumbling economy with no end in sight. 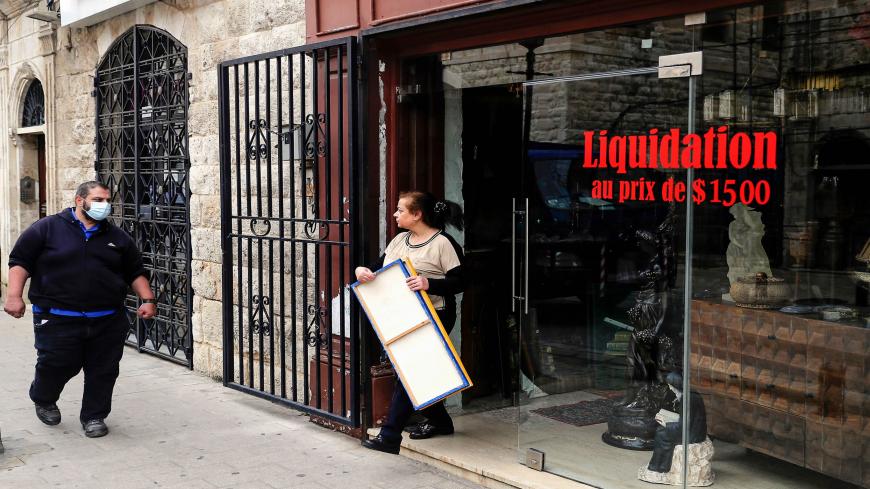 A man walks past a shop in the main commercial market of the coastal city of Jounieh, north of Beirut, Lebanon, Dec. 01, 2020. - Joseph Eid/AFP via Getty Images

BEIRUT — The economic and living situation in Lebanon is ever-worsening. A large part of the population is unable to secure their most basic needs of food, medicine and education, as prices of goods and services are rising while the local currency continues to deprecite against the dollar. The Lebanese are losing their purchasing power with many having lost their jobs due to the financial crisis that has plagued the country since 2019. Then came the Beirut port explosion on Aug. 4, which killed more than 200 people, injured 6,000 others and destroyed much of the capital.

The Lebanese authorities are now planning to lift subsidies on basic commodities, namely flour, fuel, medicines, subsidized food commodities and medical supplies, which could have disastrous social repercussions on most of the Lebanese people.

BDL Gov. Riad Salameh said in a Dec.1  interview on Al-Hadath, “The BDL is only able to maintain support for basic commodities in the country for two more months,” noting that at least $600 million is withdrawn a month to subsidize commodities and meet the needs of the Lebanese.

During the Dec. 2 parliamentary committee meeting on subsidies and mandatory reserves, the BDL third deputy governor, Salim Shaheen, noted that the total accounts owned by the BDL abroad currently amount to $17.9 billion — $17.1 billion of which are mandatory reserves for banks — and the remaining and usable reserves amount to $800 million, which could suffice for the next two months if subsidies are rationalized.

On Dec. 7, people took to the streets across Lebanon to protest against the plan to remove subsidies on basic commodities that are among the citizens' basic needs, such as bread, gasoline, diesel, medicine and foodstuffs.

The Lebanese have grown angry at the plan to lift subsidies in the absence of an alternative plan that would keep pace with the living crisis and the economic collapse that will cause a social catastrophe. The first signs of a catastrophe emerged when the head of the Lebanese Bakery Association, Ali Ibrahim, announced Dec. 7 that the Ministry of Economy would only subsidize the flour used in making pita bread. i.e., based on the 1,515 pound exchange rate. As for manousheh (a flatbread topped with thyme), brown bread, cakes, croissants and other baked goods, their price will be based on the market rate, which is over 8,000 pounds per $1. Consequently, most Lebanese will not be able to buy the most basic food commodities, as well as fuel for heating and transportation, and even medicines and medical treatments.

Jean Tawila, an economist and head of the Social and Economic Committee of the Kataeb party, told Al-Monitor, “There are no good options left for the authorities to adopt; whatever they decide to do will have negative effects on society as a whole. Subsidy cards must be provided to the poorest families in order to protect them [from the crisis],” pointing out that lifting subsidies would result in reducing the purchasing power of people, even the well-off families who will also be greatly affected.

However, many dread the mechanism that will be adopted in the distribution of these cards, which enables poor families to buy their basic needs. The World Bank predicted in its Lebanon Economic Monitor report issued on Dec. 1 that poverty rates will likely continue to rise, making more than half of the population poor by 2021, and thus a large part of the Lebanese will need this card.

While no decision has yet been taken regarding the so-called rationalization of subsidies before coming to a complete stop in two months' time, another threat has emerged. Various private universities, including the American University of Beirut (AUB), are increasing tuition fees, based on an exchange rate of 3,900 pounds per $1, instead of the official exchange rate of 1,515 pounds.

Lama Jamal al-Din, a psychology student at AUB, told Al-Monitor, “My family may have to get a loan to pay for my tuition this semester. This is my final year and I was planning to get a master’s degree after, but now I cannot. Over half of the students will not be able to pay the university fees since the majority of our parents receive their salaries in Lebanese pounds. We are trying to pressure the university to suspend the decision to increase tuition starting next semester.”

To express their rejection of the decision to dollarize tuition fees in private universities, activists called for “A Day of Student Anger” protests in front of universities on Dec. 19.

Rima, a first-year pharmacy student at the Universite Saint-Joseph de Beyrouth, told Al-Monitor, “Our university will certainly follow suit and raise tuition fees. This is a nightmare. I have no idea how my parents will be able to afford to put me through university. The cost of a year was $15,000 — the equivalent of 22.5 million pounds based on the 1,515 pounds rate. If the 3,900 pound per $1 rate is adopted, it will become 58.5 million pounds annually. I am not sure my family can bear this cost because they pay for the school fees of my two siblings as well.”

In light of these decisions, the fate of most students has become unknown. It will be difficult for many to enroll in the Lebanese University — a low tuition public university — which cannot accommodate their numbers, in addition to lacking some specializations. Meanwhile, many cannot travel to finish their studies abroad since Lebanese banks are blocking transfers and withdrawals in foreign currency.

Life in Lebanon has become a torment on all levels. “There is no way out of this crisis until a government of specialists is formed, to finalize negotiations with the International Monetary Fund and implement reforms [required to unlock international aid],” Tawila concluded.