Lebanese wary of rise of customs duties amid economic crisis

The cash-strapped Lebanese government has approved a draft budget law for 2022 that hikes the customs dollar and imposes new duties, as the country battles a severe economic crisis. 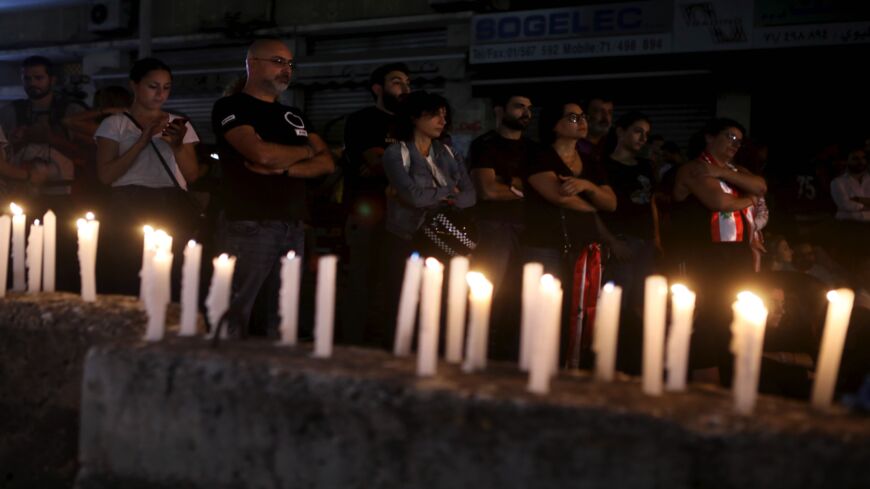 Lebanese anti-government protesters take part in a candlelight vigil outside the headquarters of Lebanon Electricity company in Beirut on Nov. 11, 2019. The country has been swept by an unprecedented cross-sectarian protest movement against the entire political establishment, which is widely seen as irretrievably corrupt and unable to deal with a deepening economic crisis. - PATRICK BAZ/AFP via Getty Images

BEIRUT — The Lebanese government approved on Feb. 10 the draft budget law for the year 2022, with plans to hike customs duties and impose new taxes. The budget will be discussed in parliament on Feb. 21 for ratification. This comes as the Lebanese people have battled their worst economic crisis for nearly two years now.

The recent talk about amending the exchange rate of customs transactions for imports and the imposition of new customs duties stirred great concern among Lebanese. The measure will further up the prices of goods and services since Lebanon relies mostly on imports for all of its needs.

Sasha Amin, a young Lebanese woman who works in public health, told Al-Monitor, “If the exchange rate to the dollar for customs is raised, the situation will further exacerbate and prices will skyrocket. The prices of medical care and basic needs, including food and education, are already soaring. An increased rate of the customs dollar will be catastrophic.”

Also, many local factories depend on imported raw materials.

The customs dollar is the price for calculating the customs value of imports, and it is paid in Lebanese pounds. Its price was fixed according to the official exchange rate at 1,515 against the US dollar. Amid the freefall of the local currency value since October 2019 and the emergence of multiple dollar exchange rates, talks about amending the exchange rate of the customs value have made headlines.

Immediately after approving the state budget, Prime Minister Najib Mikati said in a statement that the customs dollar will be applied when the budget is ratified in parliament.

He noted that the exchange rate of customs transactions for imports will be set by the central bank's foreign exchange platform, known as Sayrafa, and will be announced by the minister of finance on a monthly basis.

“Customs taxes on medication and food, as well as coffee and tea, will be removed,” Mikati said.

Sayrafa is a new electronic platform developed by the central bank that aims to record all Lebanese-pound foreign exchange transactions into any other foreign currency, in order to set the exchange rate according to a daily pricing close to the parallel market exchange rate, standing now at 21,000 Lebanese pounds to the dollar (as of the time of this writing).

Despite assurances by concerned authorities that the new customs dollar will not affect the prices of basic goods, many citizens find it disastrous and believe it will increase state revenues out of the people's pockets in order to reduce the public budget deficit.

Meanwhile, prices of some commodities have already increased under the pretext of covering the upcoming cost of imports.

Ali Abbas, a lawyer and activist with the local People’s Anti-Corruption Observatory, told Al-Monitor, “Adjusting the price of the customs dollar and imposing a fee of 3% on all imported goods and a fee of 10% on imported goods if similar ones are manufactured inside Lebanon will definitely inflate the prices of all goods. Instead of implementing customs reform, [the government is making] the consumer bear all the burden.”

Abbas argued that the new customs duties will not increase customs revenues but rather will promote fraud, tax evasion and smuggling of goods across the border. “In order to improve customs revenues by 40% to 50%, the entire trade and import sector must be reformed. Despite the rampant corruption plaguing it, the sector brought in one-third of state revenues.”

In turn, economist Walid Abu Suleiman pointed out that citizens need to know which commodities, in particular, would be exempted from customs duties, as this was not clarified yet.

Abu Suleiman told Al-Monitor, “There is no social justice in Lebanon. The depositors are getting only part of their funds held in the banks at the price of 8,000 Lebanese pounds to the dollar. Meanwhile, Lebanese are forced to pay the prices of goods and services at the exchange rate set by Sayrafa, which is much higher.”

He added, “Any comprehensive taxes would not bring large revenues to the state. It would have been more useful to impose excise taxes affecting the affluent classes — for example, on cars whose price exceeds $100,000, and on the occupancy of marine public properties.”

Mikati announced in the same statement following the budget approval that the budget projects spending at 47 trillion Lebanese pounds with a deficit of 17%, equivalent to around $330 million at the parallel market rate. He described the budget as the “first step in a series of measures that will be taken on the financial level,” saying a workshop focused on the economic recovery plan will soon be held.

However, Abu Suleiman said that the new budget lacks a clear fiscal policy or economic vision.

The unprecedented economic crises in debt-ridden Lebanon have led to a record collapse in the value of the national currency against the dollar, a rise in commodity prices, and a crisis of medicine and fuel shortages.

Raising the price of the customs dollar would inflate the prices of goods, reduce the people’s purchasing power and amplify the already soaring poverty rates.

Meanwhile, Lebanon is seeking a loan of $3 billion to $4 billion from the International Monetary Fund, which requires the implementation of the necessary comprehensive reforms in order to unlock donors’ funds.