Half a million people in Aleppo stuck inside regime’s siege

The Syrian regime forces have imposed a blockade on the city of Aleppo, where food is becoming scarce. 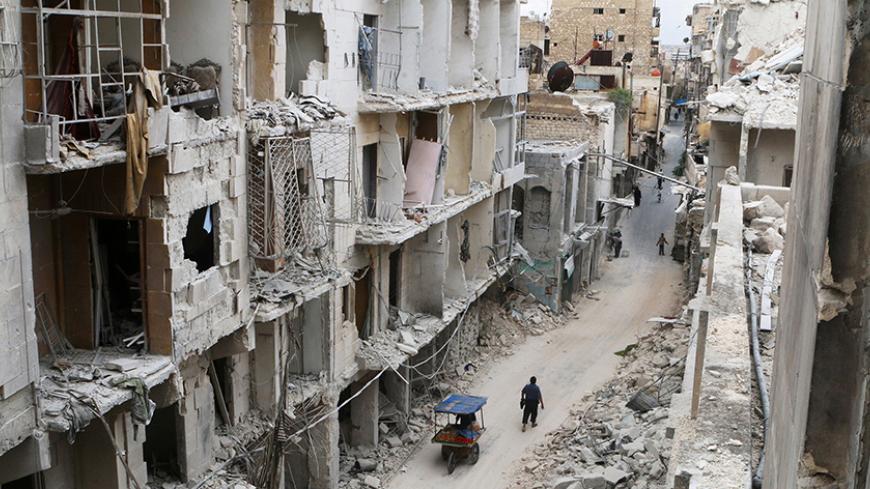 Residents walk near damaged buildings in the rebel-held area of the old part of Aleppo, May 5, 2016. - REUTERS/Abdalrhman Ismail

ALEPPO, Syria — The city of Aleppo has been under siege for 13 consecutive days. The Syrian regime imposed the blockade on the areas under the control of the Syrian opposition after government forces took over strategic areas July 7 in al-Mallah region in northern Aleppo province. As a result, the regime forces were able to closely monitor Castello Road, the only road leading to the northern and western countryside of Aleppo and the sole humanitarian route that allows the daily passage of merchandise and food from Aleppo’s countryside and from the Turkish-Syrian border areas to the neighborhoods in Aleppo that are in the grip of the armed opposition. Castello Road was still blocked at the time of this writing.

Residents of Aleppo neighborhoods controlled by the rebels are experiencing a tragic situation under the regime’s siege. The city’s markets that were once buzzing with people are now almost empty and many shops have shut down due to a lack of food products that used to arrive daily via Castello Road. The prices of some commodities, such as potatoes, eggplant, tomatoes and bread, have soared and have become unaffordable for the unemployed in the city.

In addition, the large number of civilians in the areas of Aleppo under the Syrian opposition’s control — estimated at 400,000 by the local council of Aleppo city — has added insult to injury. Food and vegetables in the markets ran out three days after the regime forces besieged the city. UN spokeswoman Alessandra Vellucci said in her July 12 press statement at the Geneva headquarters that “intensified hostilities between government forces and armed groups had cut 300,000 people in eastern Aleppo off from humanitarian supplies and commercial goods, and prices in the city were already rising.” Vellucci also demanded evacuation of civilians from Aleppo.

Abu Alaa, who lives in al-Qatarji neighborhood, told Al-Monitor, “We were not ready for the siege. They suddenly said that Castello Road is blocked. Nobody can leave or enter the city. I have been trying since the early morning to buy 1 kilogram [roughly 2 pounds] of tomatoes, but in vain. I looked everywhere, but I still cannot find any. I have a family of six. This is unbearable. My wife and I can take hunger, but how will my son survive this? He is 6 and does not understand war and sieges. We hope this situation will not last long. People will not be able to tolerate the siege long.”

In contrast, a small number of civilians in Aleppo were aware a siege was coming. The battles that have been ongoing for more than two months in the city drove them to prepare themselves, and they had taken some preparations in the event that the regime forces implemented a siege.

Abu Mohammad, a resident from al-Qatarji neighborhood who refused to reveal his full name, told Al-Monitor, “I expected a siege, but I was not ready to leave the city. I have a small daughter, my father, mother and young brothers who need me. We were displaced before, but we suffered a lot. We have decided to remain in Aleppo against all odds. I made some preparations in anticipation of the siege. I bought chickens and fed them to gain weight; I will make use of their meat and eggs in the near future. I also planted potatoes and tomatoes in a small space in the garden near my house; I will try to plant other crops also. I bought rice and sugar, but I do not know how long these resources will last; it all depends on how long the blockade endures. The rebels are saying they will do their best to lift the siege. We hope that we will not face the same fate as Darayya in Rif Dimashq. We saw pictures and the situation was painful.”

In February, the local council of Aleppo city worked out a plan to alleviate the effects of a siege on civilians and adopted a special strategy in anticipation of the current developments. The head of the council, Brita Hagi Hasan, told Al-Monitor, “The siege has been a shadow over Aleppo since February due to the wide-scale military operations on the outskirts of northern Aleppo. The council has been working out plans ever since in anticipation of a possible siege. We stored food supplies, flour and fuel as per our capacities. We have a stock of food supplies to last us for a certain period that I cannot disclose, but it is reassuring. We also have a good stock of flour, as we need 70 tons daily. Fuel is already difficult to get, and gas and fuel oil are both scarce as they come from the Islamic State [areas]. As for medical supplies, the Health Directorate affiliated with the Health Ministry in the current interim government and the local council are cooperating, and there is a good stock of medication.”

Hasan said the local council, in cooperation with military factions and relief organizations, is working on what to do next. "We are carrying out awareness campaigns for civilians and traders regarding rationed consumption of basic materials and how to adapt to the new situation. We have coordinated with relief organizations in Aleppo in regard to the importance of distributing food rations to residents of the city without any exceptions as part of a special action plan. Civilians and factions of the Free Syrian Army are coordinating largely with the council because we cannot afford any mistakes. We are trying to reduce the effect of the siege as much as possible and provide civilians with their minimum needs.”

Residents of Aleppo are waiting impatiently for a battle that would open Castello Road so that they can receive food supplies to survive. Most of Aleppo’s residents would rather not leave, as the displaced have suffered in the areas on the Turkish-Syrian border, where housing costs are high. The displaced have not been able to reach Turkey since the Turkish government’s closing of the land borders in March 2015.