Residents of besieged eastern Aleppo fear they might not survive the winter as their already meager and expensive fuel sources are running out. 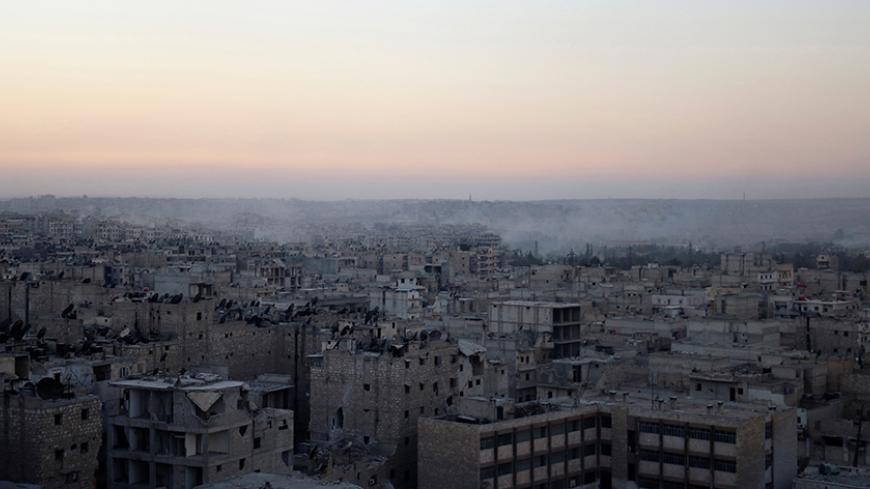 ALEPPO, Syria — Residents of the opposition-controlled eastern neighborhoods of Aleppo are bracing themselves for the harsh winter conditions amid the regime's blockade that has been ongoing since Sept. 4. The besieged neighborhoods are facing a lack of heat sources for the winter. They have critically limited access to fuel and electricity, and there are prohibitively high, blockade-driven prices for wood, their basic heat source during the past four years.

As winter draws near, the price of a 200-liter barrel of diesel fuel hit 250,000 Syrian pounds ($500) in the eastern neighborhoods of the city of Aleppo because of the blockade. Before the blockade, the same quantity sold for 55,000 pounds ($90). Meanwhile, the price of a ton of firewood for heating reached 200,000 pounds ($400), compared to $120 before the blockade. Families cannot afford such prices in Aleppo amid difficult economic conditions plaguing the eastern neighborhoods of the city, as the average income of family providers does not exceed $100 — if they are lucky enough to have a job.

Electricity, which was the main heating source before the outbreak of hostilities in the city of Aleppo in the summer of 2012, is completely cut off in the eastern neighborhoods of the city because of the military activities near battle lines in the western part of Aleppo. On Feb. 16, regime forces took control of the thermal power station, which was under the control of the Islamic State (IS), near as-Safira city in the eastern countryside of Aleppo, cutting off the electrical supply to the eastern neighborhoods of the city. Power was secured to these neighborhoods through the only such station in the province. When the station was under IS control, areas under both Syrian regime and opposition control got equal power supplies under an agreement between the three parties. However, the regime took control of it in February.

Al-Hajj Abu Mohammad, a resident of al-Qaterji in eastern Aleppo, told Al-Monitor, “We are now unable to buy food, let alone other things such as fuel or wood for heating. Prices here in Aleppo are rising dramatically due to the blockade. In previous years, we would rely on wood for heating, as fuel has always been expensive. Now, however, fuel is unavailable and wood is no longer cheap. Now everything is expensive. Our work stopped because of the blockade, and people are living an inescapable hell. It gets a little cold in the night, but it is still tolerable. But two weeks from now, the weather will be completely different, and we might have to burn our furniture and unneeded tools to heat the house. Life is no longer bearable over here.”

The Syrian interim government's local council for the city of Aleppo is incapable of finding solutions to the heating problem, and it seems that this coming winter will hit the opposition-controlled areas of Aleppo hardest. The council members feel that there are more important things, such as bread, that need to be focused on, especially since no one can predict how long the blockade will last.

The deputy head of the Aleppo city council, Zakaria Aminu, told Al-Monitor, “At this stage, we will not be able to secure any materials to keep warm — be it diesel or wood — due to the regime blockade, and we do not have any alternatives in the event that the blockade continues. Our current priority in the council is to secure bread for civilians and ensure bread continues to be available under the siege. The local Aleppo council does not have enough diesel reserves. The existing quantity can hardly satisfy the minimum requirements of bakeries, and these are the most important."

He added, “The fuel and wood prices are rising because they are out of stock. It is a matter of supply and demand. Low supply always leads to higher prices.”

Relief organizations operating in opposition-controlled areas in the city of Aleppo also do not seem to prioritize securing or subsidizing heating sources for civilians. They are currently focused on the distribution of food to the people of the city, although in previous years, they did strive to provide heating sources in the winter to families in need.

Wael al-Halabi, a public relations officer in the nongovernmental organization Abrar Halab Association for Relief and Development, told Al-Monitor, “We know very well that this winter will be difficult for civilians, especially considering that we have been besieged for two months now. We cannot purchase fuel and distribute it to the people most in need as we did in previous years. Our focus now is feeding the people and distributing food to them. We have no idea how residents will cope with winter, especially considering that the cold is fiercer by the year, but we hope that the siege will come to an end and spare us an anticipated tragedy.”

Aleppo's civilians are aware of how harsh the winter will be for them if the blockade imposed by regime forces on the eastern neighborhoods lingers. In previous years, when there was no blockade, winter was harsh enough for civilians who struggled to secure costly heating sources.

However, Aleppans are still pinning their hopes on the Syrian opposition forces to end the siege. There are reports that the Syrian armed opposition is preparing for an upcoming battle against the regime with the aim of ending another siege imposed on the eastern neighborhoods of the city of Aleppo. Should a road be opened between the eastern neighborhoods and the northern and western Aleppo countryside, winter might be survivable.