Facing a harsh winter, people in rebel-held areas of Syria are having an especially hard time as the currency's value has plummeted and prices have skyrocketed. 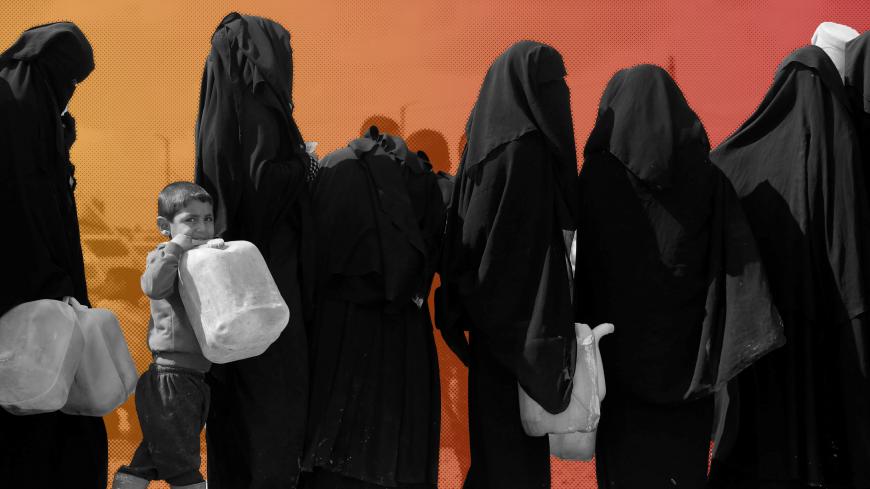 ALEPPO, Syria — Syrians in opposition-controlled areas of Idlib and Aleppo provinces are suffering under poor living conditions, with most of them struggling to meet even basic needs after almost nine years of civil war. But the recent collapse of the Syrian pound has made their situation even harder. Heating, food, decent housing, clean running water and other services have become quite costly.

“Winter has been very harsh this year," Aymen Suweid, a media activist from northern Aleppo, told Al-Monitor. "The vast majority of people in the Aleppo countryside were unable to cover heating costs due to the soaring prices of fuel. The price of a barrel of diesel fuel used for heating stands at 90,000 pounds, which is the equivalent of $100, compared with $35 last year.”

He added, “Most of the poor people, mainly in the [refugee] camps, opted for wood heaters and stoves and are now collecting firewood and dry tree branches from surrounding orchards. People who are better off are buying coal for 4,000 pounds [$5] a bag, which only lasts three days.”

AFP reported this week that some Syrians have resorted to burning pistachio shells to heat their homes.

Mustafa Bakkour, who owns a fuel store in northern Aleppo, told Al-Monitor that Turkey's Operation Peace Spring into northern Syria "has played a major role in the skyrocketing prices today." Turkey, supporting the opposition's Syrian National Army, launched the military operation in October against the Kurdish-Arab alliance known as the Syrian Democratic Forces.

"The SDF had reduced the fuel quantities entering through the Umm Jalud crossing, which links the areas under its control in Manbij to the opposition-held areas in the Aleppo countryside," Bakkour said.

“The SDF completely closed the crossing a few days after the offensive. Large quantities of crude oil [had been coming] from the oil fields in northeastern Syria to be refined later in rudimentary Aleppo refining stations. This was what caused the spike in fuel prices."

The cost of oil derivatives has contributed to spikes in prices for bread, locally manufactured goods and transportation for vegetables and other foodstuffs.

Media activist Omar Hafez told Al-Monitor that the change in the dollar exchange rate against the Syrian pound contributed in a major way to the hike in food prices. The dollar skyrocketed to about 900 pounds from 600.

“Consequently, the prices of various goods and commodities needed on a daily basis increased by at least 35%,” he explained. The increase amplified the suffering of people amid widespread unemployment.

Ahmad al-Dimashqi, who was displaced from eastern Ghouta to Idlib province, told Al-Monitor, “The worker with an average daily wage of 2,000 Syrian pounds, equivalent to approximately $2, can secure his family's bread, drinking water and a few vegetables for cooking, but he can't save to pay rent. How about those who don’t work or can’t find work? Job opportunities in Idlib are limited.”

Dalal Al-Bash, a civil activist from rural Idlib, lamented the high prices and limited purchasing power of Syrians in Idlib and Aleppo provinces due to the pound's collapse.

“This has adversely affected people’s lives," she told Al-Monitor. "The new circumstances force them to give up meals or food items such as meat and high-priced vegetables and fruits. People are mainly concerned about securing basic needs as a top priority and such needs have become hard to meet."

Al-Monitor met with media activist Ahmed al-Barraai, who was displaced from the Damascus area to Afrin in northern Aleppo. “The vast majority of the population in Afrin suffers under the high prices,” he said. “The markets have little to no activity. Families can't cover their needs.”

Rami Al-Seid, a media activist in western Aleppo, said the humanitarian situation is even more severe in the refugee camps.

He told Al-Monitor, “People in the camps can't cover their expenses. They are unable to pay for heating, electricity or water services. They can't even afford medicine and infant formula."