Strikes by the US-led coalition on the Islamic State have targeted oil wells and refineries, causing prices of basic commodities in Syria to skyrocket. 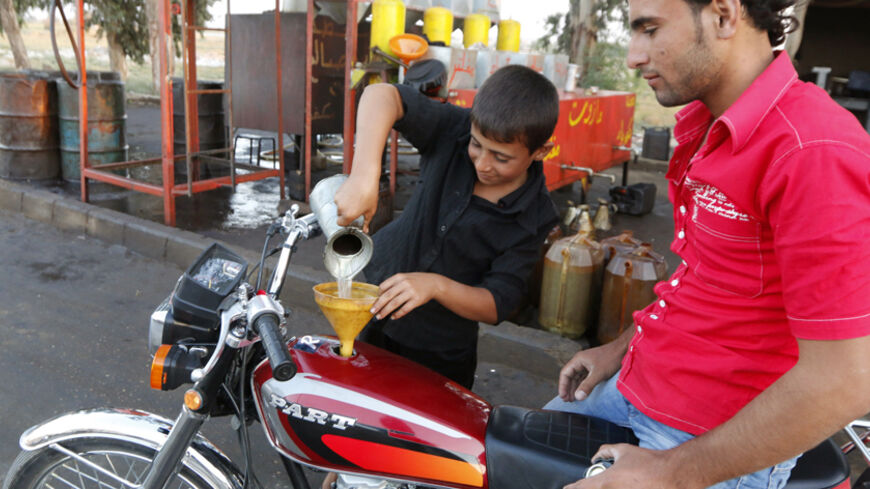 A boy fills up a motorbike with diesel along a street in the Islamic State's stronghold of Raqqa, Sept. 30, 2014. - REUTERS

ALEPPO, Syria — Syrians are following with great concern the US airstrikes targeting the Islamic State (IS) and other factions on the US terror list. These strikes have directly impacted people’s lives, as economic and vital facilities in the country have been hit, such as oil wells and refineries, adversely affecting economic conditions.

Nizar, a fuel dealer, told Al-Monitor, “Oil production has significantly decreased due to the targeting of wells and refineries by the alliance, not to mention that the workers, who fear for their lives, stopped working to extract, filter and transfer oil.”

Nizar had recently returned from a trip to IS-controlled areas, where many oil wells are located. He said, “Diesel prices have significantly increased as a result of high demand and the inability to meet the needs of the market.”

“IS closed oil wells during the first three days of strikes, contributing to the rising price of fuel, but later on, production was resumed. I do not believe prices will rise anymore, as oil is the lifeblood of IS and it cannot do without it,” Nizar added.

Nizar, like many others, carries on with his work, even though it is fraught with dangers. “I can’t find another way to make a living besides transferring oil. My small car and the small oil barrels are my only source of livelihood in this harsh life,” he said.

The oil fields located in the eastern part of the country, in Deir ez-Zor and Hasakah, which mostly fall under IS control, are the only source of energy in the country.

The coalition’s strikes on oil fields aim to deplete one of the IS' main sources of funding. Nevertheless, civilians are the most affected by the battles raging in their country, as the increased oil prices have impacted the prices of all other commodities, including food and industrial products.

In the main market of Aleppo's rebel-controlled al-Shaar neighborhood, the stagnation seems obvious, as there is little movement. A man in his 40s walks around the vegetable stands lining both sides of the road. He told Al-Monitor, while holding two bags of vegetables, “Prices are skyrocketing. I now need 30,000 Syrian pounds ($185.75) per month to feed my four children, while my salary does not exceed 40,000 Syrian pounds ($247).”

“The prices of vegetable, electricity and transport are all on the rise. Life has become harsher than death in Syria,” he added.

Furthermore, the cost of running power generators has increased, and in some cases doubled. Most of Syria's residents, especially those in rebel-controlled areas, rely on generators for electricity due to ongoing power cuts in the regime’s network as a result of the constant bombing.

The coalition’s airstrikes have placed more costs and burdens on the citizens of Syria, whether in areas controlled by the rebels, the regime or IS. Many are left with one choice: to leave the country.