While Deir ez-Zor is shipping oil other places thanks in part to a man named Hyena, many of its residents are suffering from poverty and the cold. 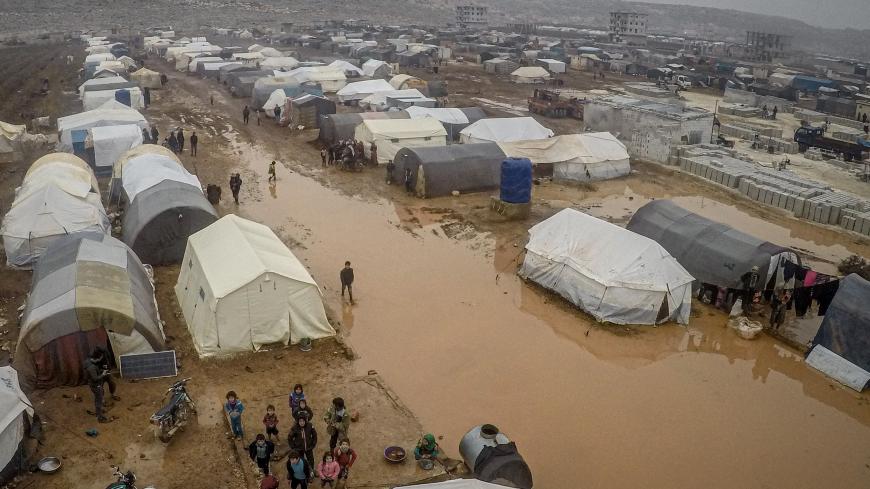 A drone photo shows an aerial view of the mud-covered road and tents at a Syrian refugee camp after heavy rain, Idlib, Syria, Dec. 13, 2019. - Muhammed Said/Anadolu Agency via Getty Images

Over the weekend, residents of a town in Syria’s eastern desert took to the streets demanding that corrupt local officials be held to account, and that revenues garnered from nearby oil wells be used to develop their area. The Dec. 14 protest in Busayra was the latest in a series of demonstrations that began in April and swept across Deir ez-Zor province, the eastern half of which is under the control of the US-backed Syrian Democratic Forces (SDF) and remains mired in poverty despite being home to two of Syria’s largest oil fields.

Tankers filled with crude head north to Hasakah on a near-daily basis, said Mohammad al-Khalaf, the pseudonym of a journalist in Deir ez-Zor. “The tankers are still going” after Turkey’s latest incursion into northeast Syria, “from the Omar and Tanak fields to Hasakah province, and there’s an SDF force that guards the trucks,” Khalaf said Dec. 5.

Khalaf added that he does not know what happens to this oil after it arrives in Hasakah. It is likely that a portion is refined and consumed locally, and that some is shipped to the government; some might even make its way to Iraqi Kurdistan and on to Turkey as part of the trade recently detailed by Al-Monitor’s Amberin Zaman.

In addition to the tankers that head north, Syrian government middlemen purchase oil extracted from the Omar and Tanak fields and ship it in trucks to government territory through Raqqa province. A tangled web of brokers and businessmen also smuggle oil products toward Damascus across the Euphrates River, on rafts and boats.

Deir ez-Zor has a number of smaller wells outside the Omar and Tanak fields, but ordinary residents do not see much benefit from these either, said Ahmad al-Ramadan, the editor-in-chief of the Euphrates Post, which covered the Busayra protest. Influential locals connected to the SDF and its regional branches, the Deir ez-Zor military and civil councils, are the primary investors in these wells and see the lion’s share of their profits, Ramadan said.

“The head of the Deir ez-Zor military council has 15 wells. Not directly — they are owned by people who are loyal to [council head] Abu Khoula, he’s not the face of the operation. … The field commanders, each get two or three wells. The local councils, they get wells,” said Ramadan, who runs a network of journalists across the province from Turkey.

In short, residents look on as oil extracted from nearby fields is shipped away, while what remains is touched by so many hands that by the time it reaches the market, it is too expensive for the least fortunate to afford.

“The strong eat the weak” in Deir ez-Zor, Ramadan said.

There are few indications this system is going to change anytime soon — at least not before the winter, when residents will rely on petroleum-based fuels to ward off the desert’s freezing temperatures. The SDF’s pivot toward Damascus and Russia following the abrupt US withdrawal from Syria’s northern border and Turkey’s resulting incursion will likely mean more Deir ez-Zor oil shipped to government areas, not less.

And despite the SDF’s repeated crackdowns on oil smuggling activity and corrupt officials, the following story illustrates that in the murky world of eastern Syria’s oil industry, might apparently makes right.

On Sept. 2, the Kurdish People’s Protection Units (YPG) announced the arrest of a man described as the chief financial officer of the Islamic State (IS) in Deir ez-Zor, Mohammad Ramadan — known locally as Hyena — after a raid with the international coalition on his house in the town of Shuhayl one day prior.

“It was the middle of the night, and usually we sleep in the courtyard of the house in the summer. So we woke up to helicopters flying low,” said a resident of Shuhayl, who spoke to al-Monitor under condition of anonymity. There were “explosions — I think they were sound bombs.”

In a curious twist, Ramadan was released from jail several days later to much fanfare in his hometown.

“His brothers and cousins were shooting in the air when he was on the way home. It was light gunfire. But when he got home … mortars and RPGs” were shot off in celebration, said the Shuhayl resident.

“All the clans in Shuhayl started firing in the air ... because shooting lots of guns, and responding to that gunfire, is considered a demonstration of power,” said the Shuhayl resident. Characterizing the thought process of those who fired off their weapons, the resident said, "‘Just like you’ve got weapons and ammunition and can shoot for hours, I can do the same and more.’”

As a result of all the shooting, “There were injuries and a man was killed in the courtyard of his house,” the resident added. The Lebanese online newspaper Al-Modon reported, “Gunfire continued despite mosques [broadcasting] appeals to stop, as ‘the hospitals were filled with wounded.’”

Ramadan’s rapid and conspicuous release from prison has given weight to local suspicions that he went from working for IS to working alongside the SDF.

“Of course, there’s a lot of uncertainty surrounding what this guy does. But this is the image of him that people know,” said the Shuhayl resident.

“People here think that they [Ramadan and his brothers] were security informants for IS” when it controlled the area, the resident said. After the SDF expelled IS, Hyena helped the SDF to “secure transport routes for tanker trucks and protect them from IS and bandits.”

“Hyena is considered an SDF official in the area,” said the Shuhayl resident, adding that Mohammad Ramadan drives an SDF military vehicle, which residents call a Van Zeira.

Ramadan’s September arrest appears to be related to a rivalry with the deputy head of the SDF-affiliated Deir ez-Zor military council, Huwaydi Dabaa. Dabaa means hyena in Arabic, and thus he is known as "Huwaydi Hyena," while Mohammad Ramadan is simply called "Hyena."

At the time of Mohammad Ramadan's arrest, the Shuhayl resident said, “Word spread around that the head of the Deir ez-Zor military council and his right-hand man, nicknamed Juju [aka Huwaydi Hyena], manufactured an accusation that Hyena [Mohammad Ramadan] was working with IS, so the international coalition raided his house.”

The resident said the prevailing opinion among Shuhayl residents is that Huwaydi Hyena and his boss intended to eat Mohammad Ramadan's slice of the oil pie by engineering his arrest.

The Shuhayl resident said Mohammad Ramadan’s release from prison “occurred under pressure from his supporters in the party,” a reference to the Abdullah Ocalan-inspired movement to which many of the SDF’s Kurdish top brass belong.

As these event were unfolding, Mohammad Ramadan accused Huwaydi Hyena of “turning the people against the SDF,” said Ahmad Ramadan. The journalist said, "Mohammad Hyena laid a trap, and Huwaydi Hyena is now in prison.”

The Shuhayl resident said Dec. 14, “Mohammad Hyena is still doing his job,” seemingly unaffected by joint training operations early this month between the SDF and the international coalition around the vicinity of the Omar fields 5 kilometers (3 miles) from Shuhayl. “In fact, I think that he’s taken on more responsibilities after he was arrested and released from prison,” the resident said.

A spokesman for Combined Joint Task Force – Operation Inherent Resolve declined to comment on Mohammad Ramadan. SDF spokesman Mustafa Bali did not respond to a request for comment.

Residents were thinking about how to stay warm this winter as the story of the two Hyenas unfolded. Temperatures in Syria’s eastern desert will dip below freezing in January, if last winter is any guide.

Last week the Euphrates Post published a video of a school in which the door frames lack doors and the window frames lack windows, meaning the temperature indoors is roughly the same as it is outside. As a reporter walks from room to room, he asks three groups of students, bundled in their winter clothes, “Are you students cold?” “Yeah!” each group responds in unison. In one classroom the reporter approaches a girl who is visibly shivering in her seat.

The situation of this school in the village of Dhiban Wasat is “very typical,” said Ahmad Ramadan. Public institutions, including schools and hospitals, suffer from regular shortages of heating fuels because of corruption in the local oil industry, the journalist said.

On the other hand, Ahmad Ramadan estimated that 90% of households are able to afford some sort of fuel for the winter — but the question is what kind.

“A barrel of diesel in Deir ez-Zor is 38,000 Syrian pounds right now, and is likely to get more expensive as we enter the winter, and with the rise in the price of the dollar,” Khalaf said Dec. 15. He said that recently, “The Deir ez-Zor civil council distributed low quality, subsidized diesel to all residents of Deir ez-Zor at the price of 17,000 Syrian pounds.” The Syrian pound has lost a lot of value lately; 17,000 pounds at the exchange rate of 515 pounds to the dollar is $33, but it would cost far less in the US currency at the black market rate.

“This bad quality diesel turns into icy chunks in the morning, because of the cold weather. So residents came up with some new methods, such as lighting a fire, and heating up [frozen] subsidized fuel in a cooking pot, and then using it for heat.” Or they add some kerosene and gasoline into the barrel of diesel, “and shake it well in order to prevent it from freezing.”

“Some families haven’t bought the subsidized diesel because of their poverty. Others haven’t because of its disgusting smell, and despicable appearance — they went ahead and bought the regular diesel at 37,000 Syrian pounds a barrel,” Khalaf said.

Even those with subsidized fuel are fortunate in that they have homes to heat at all. In its May assessment of Deir ez-Zor province, the nongovernmental organization REACH wrote that the estimated number of internally displaced people in the area remains high (77,500 individuals) despite large movements to Hasakah province. Turkey’s October offensive likely slowed these movements of people to Hasakah, and might even have reversed them: The UN Office for Coordination of Humanitarian Affairs reported that as of Nov. 12, 74,000 people remained displaced from Hasakah, Raqqa, and Aleppo provinces because of Turkey’s offensive, some of whom had fled toward Deir ez-Zor.

As people in Deir ez-Zor hunker down for the winter with whatever means they can, tankers under SDF guard continue to carry oil north to Hasakah, government middlemen continue to smuggle oil across the Euphrates River and players in the wartime economy such as Mohammad Ramadan continue to turn a profit.