The Kurdish-led Syrian Democratic Forces and Turkish-backed rebels have reopened trade crossings in northern Aleppo, bringing a sigh of relief to residents. 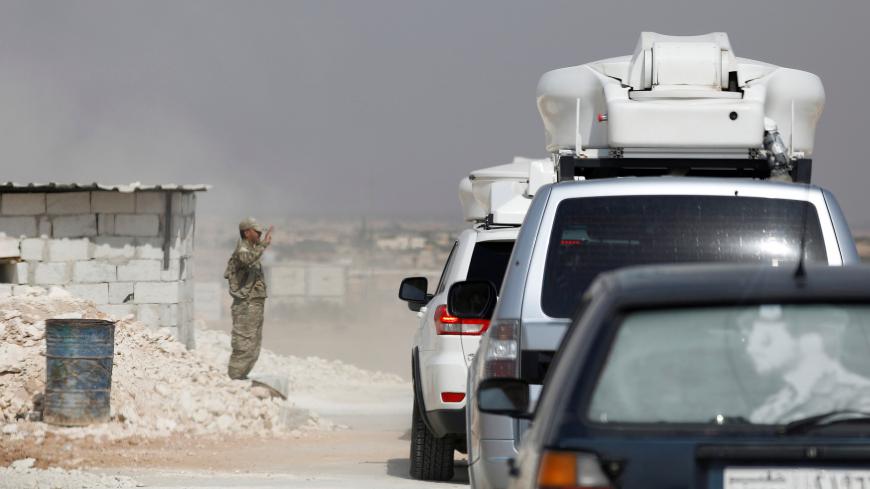 In February, the Kurdish-led Syrian Democratic Forces (SDF) and Turkish-backed rebels reopened civilian and commercial crossings between the areas under their control near the city of Manbij. In doing so, the two hostile parties in northern Syria brought a measure of relief to residents contending with shortages of essential goods since the crossings shut down in October 2019 — though some locals suspect their welfare was a secondary consideration.

“The prevailing sentiment is that reopening the borders between the SDF and the [Turkish-backed Free Syrian Army] revolves around the massive amount of revenue that benefits both groups,” said Khaled Mohammad, a journalist in northern Aleppo who covers trade for the Syrian economic news site Eqtsad. “A network of middlemen who make money from this continued commercial activity are keen to calm things down between the two sides during times of conflict or tension.”

In September 2017, Al-Monitor quoted an economist as saying that rebel brigades earned more than $1 million a month from fees imposed on goods entering SDF territory. Because of the sensitivity of the trade, reliable figures are hard to come by, particularly how much the SDF makes from import and export duties.

The goods that cross into Manbij from rebel-controlled northern Aleppo include “sugar, rice, vegetable oil, chickpeas, beans, lentils, bulgur wheat and canned goods” as well as construction materials like iron and cement, said Mohammad Manbiji, a pseudonym for a journalist in Manbij who wishes to remain anonymous.

In the other direction, “Opposition areas in Aleppo’s northeastern countryside receive crude oil and oil products from SDF territory” in Manbij, said Khaled Mohammad — as the SDF controls the vast majority of Syria’s oil.

“The Turkish-backed factions are profiting from the oil trade through several means, including providing paid protection for truckers carrying fuel products, controlling smuggling routes when the crossings are closed, taxing shipments of the energy product,” said Elizabeth Tsurkov, a fellow at the Foreign Policy Research Institute who has written extensively on these groups.

Trade across conflict lines is an enduring feature of Syria’s nine-year-old civil war, and oil is particularly effective in bringing adversaries together. Various rebel outfits including former al-Qaeda affiliate Hayyat Tarir al-Sham have reportedly smuggled oil to the regime even during times of extreme scarcity in areas under their control. IS, for its part, sold oil to Damascus when the extremist organization held territory east of the Euphrates River.

“The two are trying to slaughter each other and they are still engaged in millions and millions of dollars of trade,” a US Treasury Department official said back in 2015. The SDF continued these oil shipments to the regime after clearing IS from the area.

“All sides of the war have been engaged in the oil trade and profited from it, so in this aspect, the Turkish-backed factions are not unique,” said Tsurkov.

The Um Jlud and Aun al-Dadat crossings connect SDF and Turkey-backed rebel areas near Manbij. They opened in the wake of Turkey’s 2016-2017 Operation Euphrates Shield, during which Turkish-backed rebels seized a chunk of the border in northern Aleppo from the SDF as well as IS. Commercial traffic through the crossings decreased but did not stop when these rebels invaded the Kurdish-majority canton of Afrin, expelling the SDF and carrying out widespread human rights violations against residents. Only after Turkey’s third invasion of northern Syria in October 2019 did official trade halt near Manbij, perhaps reflecting the existential threat this most recent offensive posed to the SDF.

In northern Aleppo, the cutoff of fuel arriving from SDF areas put a damper on agriculture and industry right as winter began, said Eqtsad journalist Mohammad. Shortages were compounded by Russian airstrikes targeting local oil refineries, an increase in the price of diesel originating in Iraqi Kurdistan and imported via Turkey and the sharp deterioration of the Syrian pound.

“Diesel is the lifeblood of economic and industrial life in the area,” Mohammad told Al-Monitor. “Craftsmen and workshop owners were forced to reduce hours or let go of workers in an attempt to deal with the scarcity of diesel. … The high price of diesel increased production costs for farmers in terms of planting and harvesting, workers’ wages and transportation costs. Therefore, a number of farmers stopped planting their fields, while others scaled back the amount of land they farmed.”

Residents restricted their movement and resorted to unhealthy alternatives to diesel to heat their homes as temperatures dropped. One of the most popular substitutes to burn was “byproducts from crude refining operations in the primitive refineries that used to operate in the area,” said Mohammad.

On the other side of the conflict lines in Manbij city, prices rose as “people worried that grocery items would disappear because of the crossings’ closure,” said Manbiji. Their fears were compounded by threats from Turkish President Recep Tayyip Erdogan of an imminent invasion. “Seeing as the city had lived through a siege four years before — during the IS days — residents were very scared of traders hoarding goods,” Manbiji added.

Local authorities took several steps to combat price inflation during this period, said Mohammad Sabri, co-president of the Economic Council in the SDF-linked Manbij Democratic Civil Administration. The economic council “fixed goods’ prices for bulk sellers and opened a center to distribute essential retail goods at competitive prices, creating competition in the retail markets.” The council also “imported alternative goods from other sources,” a reference to traders operating in areas of government control.

Sabri said that the collapse of the Syrian pound in late 2019 was the reason behind inflated prices rather than the closure of the Um Jlud and Aun al-Dadat crossings.

Nevertheless, after the SDF and Turkish-backed rebels reopened the crossings in February, “the markets recovered, people began buying goods … food prices dropped noticeably,” said Manbiji, despite the Syrian pound losing value throughout February and into March. “Sugar was 700 Syrian pounds [$0.60]; now it’s 500 Syrian pounds [$0.43] or less. A kilogram of rice was between 600-1,400 Syrian pounds [$0.51-$1.20]; now it’s 250-1,200 pounds [$0.21-$1.02], depending on the type of rice and the supplier. In addition to baby formula, cement, iron for construction — their prices went down a lot.”

Residents of northern Aleppo have yet to experience similar relief, which would require petroleum products to resume flowing, rather than trickling into their areas as it is currently.

“During the past few days about 20 tankers carrying refined diesel have entered from SDF to Euphrates Shield areas, a tiny quantity compared to local families’ consumption,” said Mohammad on March 12. The price for a liter of diesel has fallen a paltry 10 Syrian pounds, probably “a result of a decrease in demand for heating because the weather is getting warmer.”

In response to the coronavirus threat, rebel brigades restricted civilian travel through the Aun al-Dadat crossing last week. But “commercial traffic continues despite locals from all walks of life calling for it to be shut down” to prevent the spread of the virus, said Mohammad, adding, “The most important element is the policy of mutual economic interest between the SDF and [rebel] National Army.”