The Syrian Democratic Forces are seeking Arab tribes’ support in Manbij, northeast of Aleppo, ahead of the anticipated Turkish military operation in northern Syria. 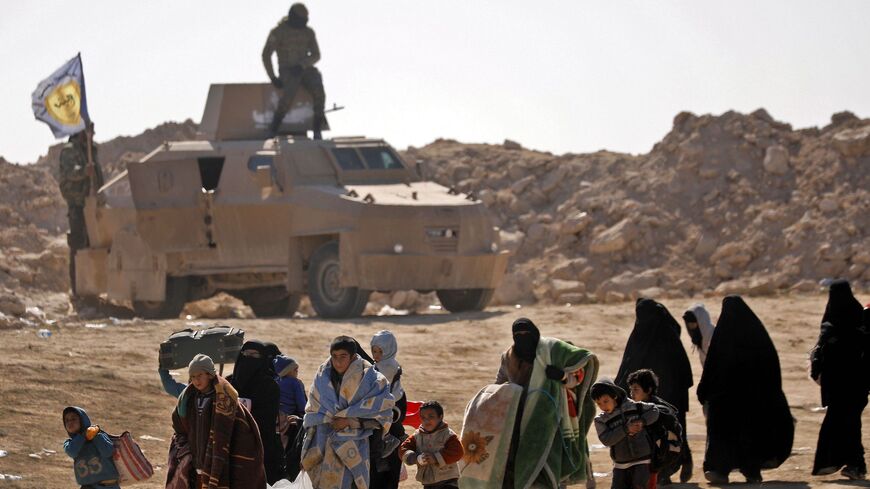 Civilians fleeing the battered Islamic State-held holdout of Baghouz in the eastern Syrian province of Deir ez-Zor walk past an armored vehicle belonging to the Manbij Military Council into a nearby area held by the Syrian Democratic Forces (SDF) on Feb. 12, 2019. - DELIL SOULEIMAN/AFP via Getty Images

ALEPPO, Syria — Turkish armed forces and Turkey-backed Free Syrian Army (FSA) factions have mobilized on the outskirts of Manbij, which is under the control of the Kurdish-led Syrian Democratic Forces (SDF), in the northeastern Aleppo countryside in preparation for an anticipated Turkish military operation in northern Syria.

The Turkish army and FSA factions have recently been targeting SDF positions in Manbij’s surrounding villages with heavy weapons and artillery.

On June 15, the SDF-affiliated Manbij Military Council said it shot down a Turkish drone flying over the area.

At a time when the Turkish-backed Syrian opposition is working to mobilize the popular circles in Aleppo's countryside in support for the expected Turkish military operation, the SDF is trying to mobilize all its military, popular and tribal capabilities, especially in Manbij, where the SDF allowed Syrian government forces to send military reinforcements. Bashar al-Assad's forces were recently deployed to several posts on the fronts against the FSA in Aleppo countryside.

On June 14, the pro-SDF Arab tribes in Manbij organized a march in protest against the Turkish military operation in the area.

The media office of the Civil Administration in the city of Manbij said in a June 14 post on Facebook that “the tribal march in Manbij started from the al-Mizan roundabout on Aleppo road. Protesters chanted slogans expressing their rejection of the [Turkish] threats. ‘Enough with the war. Enough with displacement. Enough with destruction. No for displacement. No for war’ were among the many slogans chanted by the protesters.”

On June 16, Hawar News Agency, which is close to the SDF, quoted tribal dignitaries who took part in the march in Manbij as saying, “We categorically reject the Turkish threats against the area and it’s everyone’s responsibility to defend it.”

The dignitaries stressed that they stand united with the military forces against any aggression.

Hawar News Agency also quoted Omar al-Ghanem, a dignitary of al-Ghanem al-Bou Shaaban tribe, as saying, “We are against any Turkish intervention in our areas. We will all serve as fighters in the face of the Turkish offensive.”

On June 15, a delegation consisting of tribal sheikhs from Tabqa city in Raqqa province and officials in the Tabqa Democratic Civil Administration headed to Manbij, where it met with tribal leaders close to the SDF to convey their support against the recent Turkish military threats.

On June 16, the women’s council of the Future Syria Party, which is close to SDF, held a meeting for tribal chiefs in Manbij to discuss the latest political developments and the need to activate the political and social role of tribal chiefs and to unify their ranks in the face of Turkish threats.

Speaking to Al-Monitor on condition of anonymity, a tribal dignitary who took part in the Manbij march said, “A large part of the Arab tribes in Manbij do not want a war to break out and do reject the opposition’s and the Turkish army’s anticipated attack on the city. Manbij is very populated, and any war will negatively affect them and the city and its countryside.”

The dignitary, who owns a foodstuff store in Manbij, said he communicated with his relatives in Tabqa to rent a store to transport his commodities in case of a military operation. He added, “There are many tribal sheikhs I know in Manbij who fear that Manbij will turn into a battlefield, which will lead to the destruction of the industrial facilities and markets. They intend to move out their goods and their possessions to a safe place away from the war that may be ignited.”

Back in September 2021, North-Press news agency, which is close to the SDF, quoted Abir al-Akla, co-chair of the Economic Committee in Manbij, as saying that “the city has become the most important industrial area due to its important strategic location and role as a commercial gateway to the regions of northeastern Syria.”

Ahmed Abu Faisal, a tribal dignitary opposing the SDF in Manbij, told Al-Monitor, “Manbij has a tribal character, and a large segment of Arab tribesmen have common interests with the SDF and its civil administration in Manbij. They are direct beneficiaries, and their sons are part of the economic and administrative system. The Turkish military operation threatens their interests, as well as those of the SDF, which is taking advantage of the tribes’ fears and pushing them to participate in the popular movement against the Turkish military operation.”

Abu Faisal added, “The tribes in the region are divided into three groups. There is a segment loyal to the Syrian regime, a large segment loyal to the SDF and a third segment opposing both parties. But the latter is a minority and plays no major role. In light of the Turkish threats of a military operation, an undeclared alliance has recently been formed in Manbij between the pro-regime and pro-SDF segments. This became evident after the regime forces entered the area.”

The strategic Manbij city is located in the eastern Aleppo countryside. The Syrian government lost control of the city in late 2012 following the entry of the opposition factions. Later in 2014, Manbij fell under the control of the Islamic State (IS), until the SDF entered the city in mid-2016 and cleared it of IS militants with the support of the US-led coalition.

Muhammad al-Sukari, a researcher on Syrian affairs based in Gaziantep, Turkey, told Al-Monitor, “The SDF believes that mobilizing the tribes would create a popular environment that would hinder the Turkish military operation and send a message to the West whereby the people [of Manbij] have the right to self-determination.”

A source close to the SDF-affiliated Manbij Military Council told Al-Monitor on condition of anonymity, “There is a tight relationship between the Arab tribes and the Manbij Military Council, since most of the council’s members hail from the tribes in the area. Thus, the tribes’ rejection of the Turkish military operation is very logical, because in case the SDF loses [control of] Manbij at the expense of the FSA and Turkey, the tribesmen would not be able to stay in the city given their involvement in the armed operations alongside the SDF.”

He added, “The SDF is also exploiting the tribesmen’s fear [of the Turkish operation] to give them instructions to intensify their supporting activities and participation in protests and marches opposing the Turkish military operation.”

The source went on to say, “The tribes have indeed increased their activities in support of the SDF lately. On June 20, the tribes in Manbij organized a sit-in under the slogan ‘Through resistance, we will make our voices heard.’ The members of the tribes set up a tent in the Ghassaniya school in central Manbij to express their solidarity and support for the Manbij Military Council against the anticipated Turkish military operation.”