The Syrian opposition-led government is penalizing anyone involved in smuggling operations in a bid to contain the spread of the coronavirus. 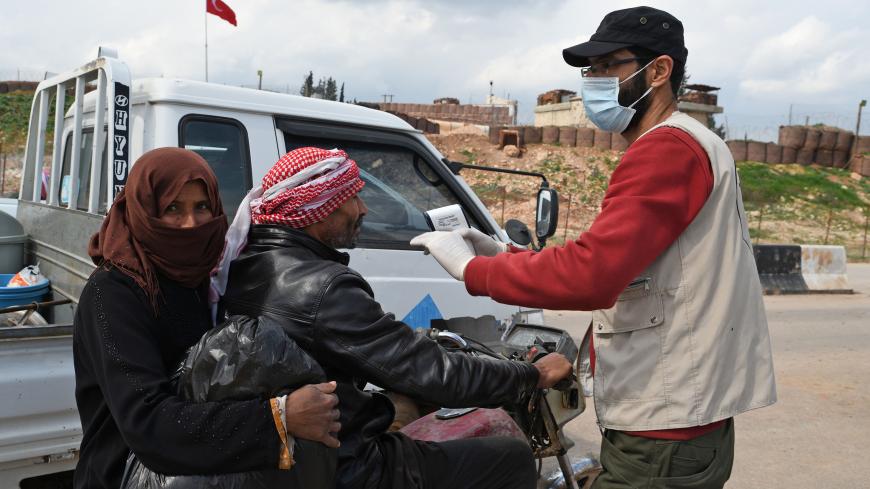 Local groups, in cooperation with the Turkish health department, take people's temperatures and inform them about the dangers of the spread of the coronavirus, March 17, 2020. - RAMI AL SAYED/AFP via Getty Images

ALEPPO — The Syrian opposition coalition announced a set of sanctions that will be taken against opposition members and leaders found to be involved in smuggling people and goods from border crossings and smuggling corridors along the lines of contact with the Syrian regime and the Syrian Democratic Forces (SDF) in the Aleppo countryside.

The coalition, which is affiliated with the Free Syrian Army (FSA) said in an April 7 statement that any person who is proven to be involved in facilitating, covering up for or participating in smuggling operations “shall be dismissed from the [Turkish-backed FSA] and referred to the military judiciary.”

According to the statement, anyone who is caught crossing the lines of contact with the regime and the SDF shall be handed over to the military police and then referred to the opposition’s military court. The opposition also called on reinforcing the teams on duty at the crossings to prevent the entry of people and goods, whatever the reasons.

In its statement, the opposition further called for reinforcing security on the fronts along the entire lines of contact, stopping any individuals trying to infiltrate opposition areas and setting ambushes in areas likely to be used by smugglers to sneak in people and goods.

The opposition had announced on March 17 the closure of the Hamran crossing, which connects the northern countryside of Aleppo to the SDF-controlled city of Manbij in the eastern countryside, as well as the Aoun al-Dadat crossing that connects to the SDF areas. The decisions to close the crossings came amid fears that the coronavirus might reach the area. The Syrian regime has so far confirmed 19 cases of the virus in its areas of control.

On April 6, the North Free Doctors Syndicate issued another statement calling on the opposition to follow up on the smuggling issue and stand firmly against these violations that threaten the security of 4 million people in northwestern Syria.

The new measures came amid repeated popular demands in northwestern Syria to implement the previous decisions the opposition had announced regarding the closure of the crossings, which continued to operate regardless. The FSA factions were accused of overlooking said decision, as the three crossings in opposition-held areas — Aoun al-Dadat, Hamran and Abu al-Zandeen — continued to operate, and smugglers close to the factions continued to smuggle goods and people.

Firas Mawlla, an activist in Aleppo’s countryside who works with local media sites whose names he did not mention, told Al-Monitor, “The [FSA] leaders bear responsibility for the risks involved in not closing crossings and smuggling corridors, and if this chaos continues, the consequences will be dire. Opposition areas are full of camps packed with displaced people, and they are not medically eligible to deal with the pandemic.”

Journalist Farid Abu Yamen, who lives in the countryside of Aleppo and did not mention with which media outlet he works, told Al-Monitor, “Smugglers and operators of crossings must be stopped; otherwise, the pandemic will make its way and a disaster will occur, as we will have to see our relatives and friends die.”

Opposition coalition official Abdul Rahman Mustafa told Al-Monitor, “The [opposition-led] government will deal with the issue of internal crossings in a serious and rapid manner. We issued warnings about our zero tolerance with smuggling attempts and violating the relevant decisions due to the extreme danger keeping these crossings operating poses.”

Mustafa added, “Several obstacles are hindering the complete success in controlling smuggling, but we are working to gradually avoid them. The liberated [opposition] areas are vast and the lines of contact with other areas are long, and the complete control of these lines requires great human and technical resources.”

It is noteworthy that no coronavirus cases have so far been recorded in northwest Syria, the opposition-led government reported on April 8.

Meanwhile, the opposition announced on April 3 a general amnesty for crimes committed before April 1. The decision stated that the amnesty removes the entire sentences for perpetrators of “misdemeanors, wrongdoings and prisoners over the age of 70 and those with terminal illnesses.”

The amnesty decision issued by the opposition in northwestern Syria coincides with the outbreak of the coronavirus in most countries of the world, as several countries have released their detainees, fearing that the virus could spread in prisons.

On April 4, Anadolu Agency quoted Mustafa as saying, “The [opposition-led] government has issued a general amnesty in order to reduce overcrowding in prisons, as part of the measures taken to contain the outbreak of the coronavirus.”