As it loses ground in Mosul, the Islamic State is more determined than ever to gain ground in Deir ez-Zor, and its takeover could spell disaster for the civilians who have remained in the area. 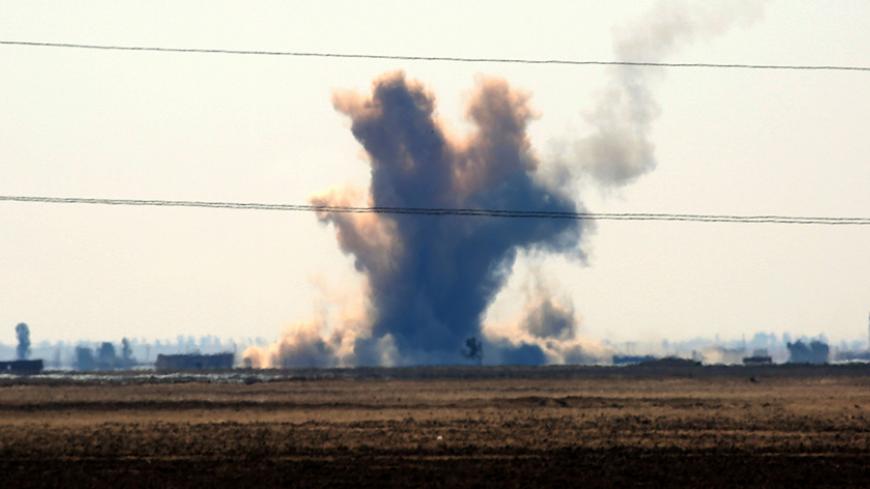 Smoke rises in the distance after fighters from the Syrian Democratic Forces fired a mortar from the village of Sabah al-Khayr on the northern outskirts of Deir Ez-Zor, Syria, Feb. 21, 2017. - DELIL SOULEIMAN/AFP/Getty Images

In the Syrian city of Deir ez-Zor, the days are heavy and the nights are long. The sounds of explosions resonate and the streets are deserted as residents seek refuge in their homes. Too tired, poor, scared and hungry to venture outside, they struggle to survive from one day to the next amid the crippling siege as well as the ongoing Islamic State onslaught.

“All of us have this feeling that you might leave your home and not return,” Zein, a resident of Deir ez-Zor's al-Qusoor neighborhood, told Al-Monitor over the phone. “All the people are traumatized. There is no way to cope, as people become accustomed to a situation that then just gets worse."

He continued, “There is no feeling of security whatsoever, and mortar rounds are hitting the city daily. No part of the city is safe.”

The residents of Deir ez-Zor, which has been under a partial siege since October 2013 and a full one since the end of 2014, have watched helplessly as fuel, water, electricity and now communication with the outside world have slowly disappeared. Today, local mafias rule the streets, basic food products have reached exorbitant prices and the very real threat of an IS-perpetrated massacre looms as the government and its allies scramble to prevent the advance of IS fighters into the city.

Located on the Euphrates River between Raqqa and Mosul — the two IS strongholds — the residents of Deir ez-Zor have been facing a strong offensive by the group since Jan. 14. After launching something of a surprise attack on the city, catching the government's forces and allies on the ground off guard, IS managed to quickly separate the air base from the rest of the city, effectively cutting off the last remaining aid supply line to approximately 100,000 civilians still stuck inside the city.

The offensive had been somewhat expected. Since it laid siege to the entire city at the end of 2014, IS has been eyeing a full takeover of Deir ez-Zor to consolidate its gains and control over northern Syria and western Iraq. In the past year, the group has been testing the defense lines of Deir ez-Zor — conducting at least three "reconnaissance under fire" missions, one of them on the main civilian hospital — as veteran IS fighters from Mosul flood the countryside around the city.

“Deir ez-Zor is located deep inside IS-held territory, close to Iraq, and it is the administrative center of eastern Syria’s oil-rich eastern desert,” explained Aron Lund, a fellow at the Century Foundation who writes on Syria. He told Al-Monitor, “Taking it would hand IS control over another provincial capital, like Raqqa, and neighborhoods and institutions that could extend its power over additional tens of thousands of civilians.”

According to pro-government sources in Beirut, the Syrian government and its allies have not been in agreement over what to do with Deir ez-Zor. The Syrian government, Iran and Hezbollah wanted to focus first on recapturing Aleppo, pointing out that other battles should be prioritized to secure the government’s control over Syrian territory, while others, such as the Russians, wanted to continue northward to Deir ez-Zor after the liberation of Palmyra in March 2016, keen to show the world they are serious about their fight against IS.

“[President Bashar] Assad and Iran seem to have been consistently more interested in the heavily populated core territories of western Syria and in breaking the foreign-backed segments of the rebellion, which they see as a greater strategic threat,” said Lund. “Objectively speaking, they are right, but things may look differently if you’re in Moscow and they must certainly look very different if you have the misfortune of being trapped inside Deir ez-Zor.”

In 2014, Deir ez-Zor had a population of about 300,000 people. Since then it has dwindled to about a third of that size after many residents fled, either by paying enormous fees to get airlifted out by the Syrian army — from $500 to over $1,000 per spot on the helicopters — or risking their lives by traveling over land through the IS-controlled territories surrounding Deir ez-Zor.

If stopped, they would be subjected to intensive “atonement” training, in which they would be forced to learn IS-approved Islamic values and ways of life. If they failed the exams at the end or tried to flee, or if IS discovered they were in any way involved with the government (including school teachers in government schools), they would be punished, imprisoned or even killed, according to sources from Deir ez-Zor.

For those who have stayed behind, life has become unbearable. The ongoing siege has enabled local gangs to take advantage of the situation and wreak havoc on the lives of civilians.

“There is looting and mugging after sunset, and since there is no electricity, most of the streets have no lights of any kind,” said Zein. “Some of those who joined the NDF [National Defense Forces] are known criminals and have been using their guns to loot and mug people and no one is doing anything about it.”

The lack of fuel has meant residents are resorting to burning everything from furniture to doors and windows, and a civilian vehicle is now a rare sight on the streets.

The lack of food has forced the residents to alter their diets. “Red meats are rare and very expensive, where you would pay around 10,000 Syrian pounds per kilo [around $46],” said Ahmad, another resident still inside Deir ez-Zor. “People now buy them in 50- or 100-gram portions.”

“Water is pumped once a week, on Saturdays, but the flow of water is very weak so it only reaches ground-floor flats,” Ahmad continued in his telephone interview. “Landlines do not work, whether to call other governorates or to make local calls. Only mobile phones work, but the coverage is weak and when something happens, everyone is trying to get through so the network dies altogether.”

Asked about medicine, he said, "There is no protection against diseases since we don't have antibiotics as well as other types of medicine."

Meanwhile, the electricity situation is so dire that stores are now offering to charge people’s phones on diesel-fueled generators for a small fee.

Making it more difficult for the Syrian government and its allies to push IS away from the front lines and change the balance of the battle, the group has been conducting its offensive through the use of small brigades, thus limiting the impact of government/Russian/US airstrikes on their positions. Today, despite government reinforcements, they are still struggling to push IS back and regain control over areas that are a mere few hundred square meters.

The future of Deir ez-Zor remains incredibly bleak. IS continues to attack on a daily basis, and as it loses ground in Mosul, it is more determined than ever to gain ground in Deir ez-Zor, which could spell disaster for the civilians who have remained in the area.

“If Deir ez-Zor fell, I would assume it would be followed by the sort of brutality we’ve seen when IS took other cities,” said Lund. “They have had a bad couple of years and would want to maximize the propaganda value.

“They could find plenty of enemies there to torture, humiliate or murder on camera in some spectacular fashion, as they have done elsewhere.”