While fleeing the Islamic State, Syria’s Deir ez-Zor residents embark on a journey risking their lives while walking in minefields. 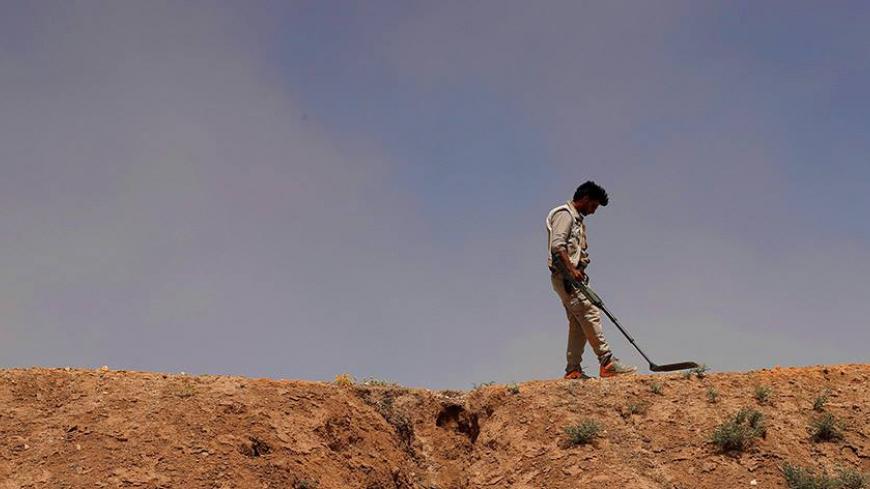 A member of Roj Mine Control Organization searches for mines and explosive devices planted by Islamic State militants to disarm them near Ain Issa village north of Raqqa, Syria, June 20, 2017. - REUTERS/Goran Tomasevic

GAZIANTEP, Turkey — After the losses incurred by the Islamic State (IS) in the battle of Raqqa that began June 6, the group’s most prominent stronghold in Syria, and the withdrawal of its forces to the city of Deir ez-Zor, adjacent to the Iraqi border, IS fighters sought to plant land mines, booby traps and explosives on the main and bypass roads in Deir ez-Zor, to prevent the infiltration of civilians who were hoping to escape its grip.

Since July 2014, IS has controlled most of the area of Deir ez-Zor city in eastern Syria. It has deployed checkpoints and patrols at the city’s entrances and exits, and imposed strict sanctions to prevent civilians from leaving the province. Thus, those fleeing had to risk their lives and rely on local smugglers to flee the city despite the large amounts of money they had to pay.

The journey is not as easy as the smugglers make it look. The Justice for Life Organization documented June 2 the death of 72 civilians killed in a mine or land mine explosion between Jan. 1, 2016, and April 30, 2017, including seven women, 19 children and 46 civilians.

The Justice for Life Organization is a nongovernmental, nonprofit organization founded in March 2015 to document human rights violations and promote the culture of human rights.

Jumaa al-Toukan, from Junaina village in the western countryside of Deir ez-Zor, said that his son Ayman, 17, died on April 25, 2016, due to a land mine planted by IS on the road leading to al-Mayadeen village in eastern Deir ez-Zor. Ayman was trying to flee the village with his cousin Jamil Nouri al-Toukan, 22, who lost his leg and died two days later.

In a conversation on WhatsApp, Toukan told Al-Monitor, "When Ayman turned 17, I was afraid IS would force him to fight with them, because he refused to pledge allegiance to them.” Thus, this situation pushed the bereaved father to agree on letting his son flee with his cousin. He added, “On their way, a land mine exploded and killed my son right away. My nephew died two days later of his wounds.”

As for Zakaria, from al-Bukamal town in the far east of Deir ez-Zor, he recalls how he spent 16 days with his wife and three children as they traveled 120 kilometers (74 miles) in the desert trying to stay clear of the mines, until they finally arrived on June 1 to al-Hawl camp in Hasakah, where they still live now.

Zakaria and others navigated rough terrain littered with mines. In a conversation on WhatsApp with Al-Monitor, he asked for his first name only to be mentioned for the safety of his remaining family members in his hometown.

He said, “The smuggler asked me to pay half a million Syrian pounds [$2,330]. I accepted provided that I would not have to go through minefields. As soon as we arrived near the Iraqi border, the smuggler asked us to walk cautiously in the minefield.” Zakaria wanted to go back, but the safe life his wife and children were longing for made him continue until they finally reached al-Hawl camp.

Deir ez-Zor residents who fled secretly have two options: either go to the Badia region and then to the city of Suwayda in south Syria, or go to the northern province of Hasakah, which is under the control of the Syrian Democratic Forces (SDF). The journey is expensive, and smugglers charge up to $1,000 per person.

The director of Justice for Life, Jalal al-Hamad, told Al-Monitor that four to five civilians die every month due to land mines planted along the smuggling routes. He said, "We documented the death of 72 civilians who were [mine] victims during a period of 16 months. We rely on witnesses who were accompanying the victims killed by mines and document their testimonies. We also meet with the victims’ relatives and make sure the provided information and data are correct.”

On June 13, 2016, eight people from the same family from Deir ez-Zor province, including four children, were killed as they crossed a minefield planted by IS on the road leading to the town of al-Bukamal while they were fleeing to the Iraqi border.

Hamad added, "We expect the number of civilians fleeing to Deir ez-Zor to further increase with the end of the battle of Mosul. IS losses in the Syrian city of Raqqa are to increase as well, given that Deir ez-Zor has become the main stronghold of IS, which will force hundreds of civilians to flee and seek safe regions.”

According to freelance military expert Abdel Nasser al-Ayed, the battle of Deir ez-Zor will not end soon since it is connected to the areas of control of IS in Iraq. IS has a popular base in the Iraqi border areas, while the group’s military fortifications are being reinforced in Deir ez-Zor with the majority of its military leaders moving there.

Ayed told Al-Monitor, "IS militants will eventually be confined to desert lands in eastern Deir ez-Zor and the rest of the Palmyra desert adjacent to the border with Iraq.”

He noted that the SDF will achieve further progress in the western countryside of Deir ez-Zor "due to IS’ lack of popular base and the few members there." He added, "Besides, the tribal community in that region considers that the ongoing battle is between IS and the Kurds, which is why they are [likely] not to take part in it.”

Most of those fleeing Deir ez-Zor and other areas under IS control in Syria flee in smuggling operations and go through several areas during their difficult journey. Al-Mayadeen is the main starting point in the direction of the Iraqi border, passing by Hasakah.

Despite the dangers and threats that fleeing Syrians face on the roads, they would rather take those risks and reach a safe place than remain under the grip of IS.