The residents of Raqqa and Deir ez-Zor are fleeing the fighting and are heading to al-Hawl camp in Hasakah, where conditions are harsh for the thousands of displaced. 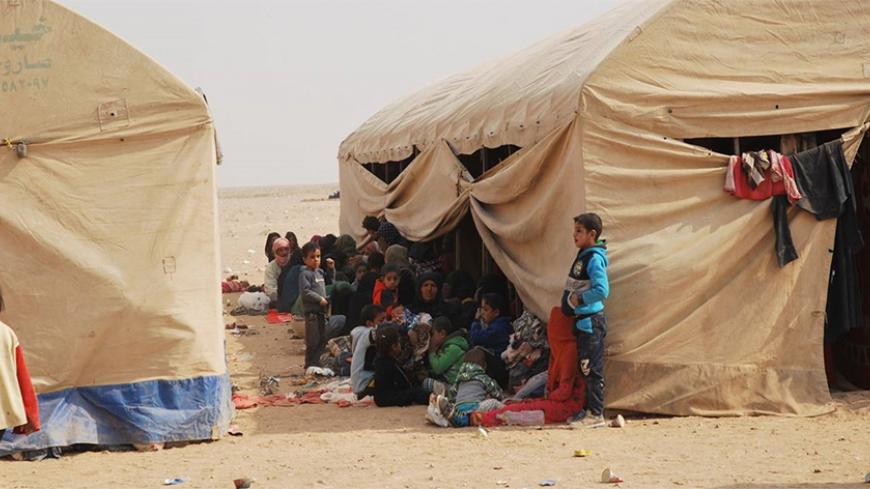 Syrian women and children sit between tents set up at the Rajm al-Salibi border crossing between Syria and Iraq, Nov. 25, 2016. - Kamal Sheikho

AL-HAWL CAMP, Syria — Amid the Syrian Democratic Forces (SDF) advance toward areas controlled by the Islamic State (IS), thousands of Syrian civilians have fled the cities of Raqqa and Deir ez-Zor in the east of the country, where IS proclaimed its caliphate in June 2014.

Abdul Sattar, who hails from the IS-controlled town of al-Bukamal, which lies southeast of Deir ez-Zor, told Al-Monitor how he was stuck for 18 days with his wife and three children in the desert surrounded by mines. They had to walk to Rajm al-Salibi, which is located in the countryside of Hasakah and under the control of the Kurdish People’s Protection Units (YPG).

Abdul Sattar preferred not to disclose his full name to protect his family members who are still stranded in al-Bukamal. “When we decided to escape, we knew we would be facing death. We were dead there, and we could die any minute now,” he said.

He described his decision to escape as “bold,” saying, “We seldom heard the news there. I heard a month ago that the international coalition started the Raqqa battle. I got excited and decided to escape at the beginning of the month with my family."

On Nov. 5, the SDF started Operation Euphrates Wrath with the participation of 30,000 Arab and Kurdish fighters to expel IS jihadis from Raqqa and Deir ez-Zor, IS’ most prominent strongholds in Syria, with the support of the US-led international coalition.

But Abdul Sattar’s hardships, along with other displaced families, did not end once they arrived at Rajm al-Salibi. Abdul Sattar was stuck at the border for 20 days. Those escaping IS-controlled areas to al-Hawl camp, which is located in Hasakah province and was established on March 24, are subject to precautionary security measures by the YPG aimed at preventing any IS members from infiltrating.

Manal from Deir ez-Zor told Al-Monitor that she had to sell her furniture and her Tefal cooking pans to secure the amount required by the person securing her escape, as the transportation and smuggling fees have increased.

Manal, who refused to reveal her full name, said, “The person securing my escape asked us for $2,000. We did not have that amount of money, so we decided to sell our house and furniture to secure that sum.”

Manal now lives in a tent in al-Hawl camp with her husband, two daughters and a young baby. The tent measures about 4 square meters (43 square feet) and is divided in a space to sleep and sit, and has a small kitchen. They were given mats, three blankets and three sponge mattresses.

“We are five people, but we were only handed provisions for three. It gets really cold at night and the blankets cannot keep us warm. We went from bad to worse,” Manal said. “I had a big kitchen and a dining room. Now we are eating and sleeping in the same space.”

Thousands of displaced persons face harsh conditions in al-Hawl camp with the cold weather and the absence of health care, medicine and drinking water.

Yerevan Hussein, the director of al-Hawl camp and coordinator of foreign relations at the camp, said that the UN High Commissioner for Refugees (UNHCR) is working on expanding al-Hawl camp.

“The UNHCR is working to accommodate 100,000 displaced people and refugees and is erecting 10,000 additional tents because the camp receives two batches of refugees on a weekly basis, and each batch ranges from 300 to 500 refugees,” she told Al-Monitor.

When asked about what problems camp management faces with the increasing number of people fleeing, Hussein said, “Many families are sleeping in the open as they await to be handed a tent. Hospitalization and medicines are provided by the Kurdish Red Crescent and no international organization is offering any help.”

Dr. Rezan Moussa, a volunteer with the Kurdish Red Crescent who works in al-Hawl clinic, told Al-Monitor, “The medical staff is very limited. We are offering medical care to people whose cases are urgent, but those we cannot help are being transferred to hospitals in Hasakah.”

The medical staff in the camp consists of a general practitioner, nurses, pharmacists and a laboratory expert. An ambulance has been allocated for the transportation of patients, and the clinic has five rooms that have been converted into a medical care service point.

Asked about the major challenges facing their work, Moussa said, “There is a shortage of medicines, and epidemic diseases are spreading rapidly.”

For his part, Abdul Hamid, who hails from the city of al-Mayadeen in Deir ez-Zor province and has been living in the camp for a month now, told Al-Monitor, “Those secretly escaping the grip of the militant group [IS] are people who refused to pledge allegiance to the group. But those who pledged allegiance decided to escape and when caught will inevitably get killed.”

Suad, a lady in her mid-40s from the city of Raqqa, had just arrived at al-Hawl camp after she finally decided to run from “the land of hell,” as she put it. She said the residents of Raqqa are “living in a ghost town. Life is suspended there until further notice.”

According to al-Hawl camp management officials who talked to Al-Monitor, the number of people displaced from Raqqa and Deir ez-Zor has risen significantly over the past few weeks following the start of the Raqqa battle, and their number is expected to rise to 100,000 displaced persons and refugees from Syrian and Iraqi areas.