IS changes modus operandi in east of Euphrates

The Syrian Democratic Forces banned wearing the niqab in the towns and villages of Raqqa after members of IS cells used it to carry out attacks. 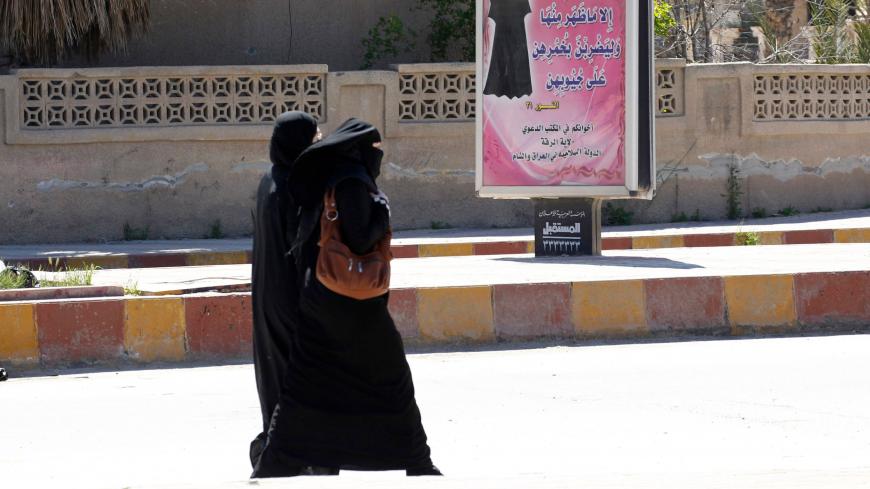 Veiled women walk past a billboard that carries a verse from the Quran urging women to wear a hijab in the northern province of Raqqa, Syria, March 31, 2014.

In a statement published Sept. 26 on its website, the SDF described the emir as the mastermind of terrorist attacks in the region. Abu Omar, who was responsible for arming and transporting IS sleeper cells, was killed by the SDF after he resisted arrest and used grenades against them, according to the SDF statement.

Shirwan Qamishlo, an SDF fighter, told Al-Monitor that Abu Omar had managed to escape before by disguising as a woman, but the SDF eventually tracked him down and killed him.

Qamishlo added, “Abu Omar, just like other sleeper cell officials, had recruited women to carry out terrorist operations in Deir ez-Zor towns and countryside, Raqqa and various parts of the east of the Euphrates. These women are veiled and wear long black and loose clothes, known as the niqab, making it hard for the SDF to track and arrest them. This is especially difficult since the niqab is also worn by civilian women who fear the reprisal of IS sleeper cells active in those areas, especially in rural areas, as IS considers the niqab as the traditional [Islamic] dress and threatens to kill anyone not wearing it.”

Qamishlo, who participated in several campaigns against IS cells in Deir ez-Zor, Raqqa, Manbij and Hasakah, said that the SDF arrested many IS women cells during security campaigns. “It appeared that many of those arrested were men disguised as women wearing the niqab.”

In a circular published Sept. 19 and posted on the walls of shops in the cities and towns of Raqqa, the Kurdish security police, known as Asayish, banned women from wearing the niqab under legal liability, citing security reasons. The circular, however, did not specify when the ban will enter into force.

Journalist and human rights activist Rana Habash al-Ahmadi described the Asayish ban as a step in the right direction. She told Al-Monitor, “This ban ought to be applied in all cities that were [once] occupied by IS in the east of the Euphrates and in camps where IS relatives and internally displaced persons from Baghouz, Raqqa and Deir ez-Zor are detained. These still fear being targeted by IS cells, threatening to kill civilians whom they label as unbelievers and collaborators with the SDF.”

Habash pointed to the worsening security situation inside the camps, especially al-Hol camp, southeast of Hasakah. The camp is home to families of IS militants, estimated at around 29,000, including children of foreign fighters. Habash warned of IS recruiting new members to carry out killings of displaced civilians in the camp.

On Sept. 20, the SDF arrested one of the largest IS cells in the city of Manbij, according to the official Kurdish news agency ANHA, close to the self-administration. It said the 18-member cell included seven women who carried out assassinations and terrorist car bombings in several locations and transported weapons and explosives to the cell.

In another incident, two IS female members stabbed a young Iraqi man with a sharp tool in his neck in al-Hol camp on Sept. 11 causing him serious injuries. He was taken to the Kurdish Crescent Hospital inside the camp; his condition improved after receiving treatment.

ANHA also reported that another young Iraqi man was killed on Sept. 5 in al-Hol camp by two men wearing the niqab who broke into his tent and beat him on the head with a sharp object. ANHA quoted eyewitnesses saying that the victim, Mohammad Shehadeh, was killed by IS cells as a punishment for lack of faith as a result of his rejection of IS ideology.

An administrator at al-Hol camp told Al-Monitor on condition of anonymity that it is difficult to identify and arrest the perpetrators of those crimes, which are often committed at night.

She said that the Asayish members in the camp found the bodies of the male and female victims in their tents. She added, “Women in al-Hol camp level threats against the Kurdish security forces. They seize every opportunity to pounce on any security member inside the camp and stab them with sharp kitchen utensils then hide and disappear among thousands of veiled women wearing the niqab.”

The source noted that assassinations are carried out by unknown persons who later turn out to be men disguised as women.

She continued, “The situation in the camp has become a ticking bomb. The United Nations and the governments of the families of IS members must find a solution to this issue. They ought to recall their citizens who joined IS and prosecute them in their own country. The situation is getting worse by the day. This threatens the future of the whole region.”

Amid the lack of security in the towns and countryside of Hasakah, the Kurdish Internal Security Forces and SDF permanently banned the entry of motorcycles in the city of Hasakah as of Oct. 5, according to the Syrian Observatory for Human Rights, a British-based monitoring group. The security forces said the decision came as a result of the killings, kidnappings, theft and terrorist bombings by IS sleeper cell members on motorbikes in the city.

IS is trying to recapture the cities and towns it deems are the borders of its caliphate in Syria by recruiting thousands of new members, especially women. These new members carry out terrorist operations and stir chaos and fear in the hearts of civilians to prove to them that IS is still here. 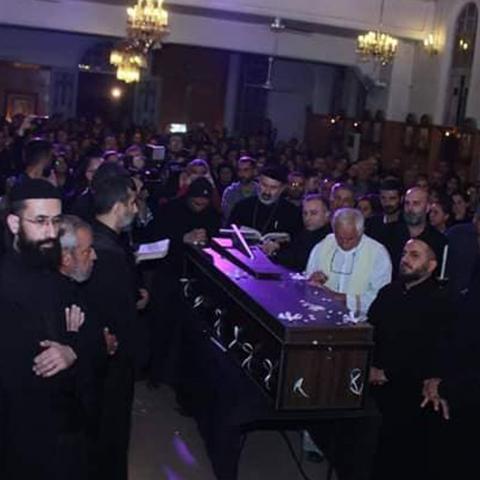