SDF, coalition crack down on IS remnants in Syria

US-backed Syrian Democratic Forces are dismantling Islamic State cells as the terrorist group still has a presence in northern and eastern Syria despite its declared defeat earlier this year. 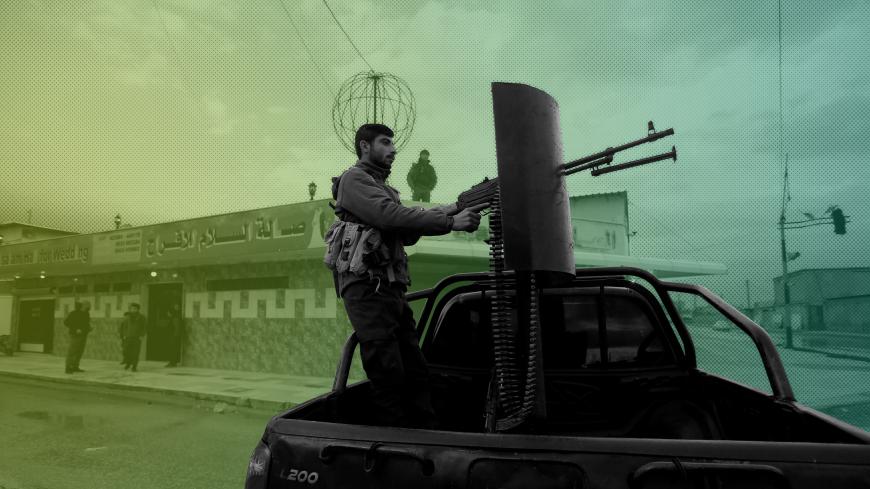 A Syrian Democratic Forces fighter stands on the back of a pickup truck that has a weapon installed on it in Qamishli, Syria, March 30, 2019. - REUTERS/Ali Hashisho

DEIR EZ-ZOR, Syria — Backed by the US-led international coalition, the Syrian Democratic Forces (SDF) are conducting near-daily air raids against Islamic State (IS) cells, which in turn carry out assassinations and bombings against the SDF and civilians who collaborate with it in the northern and eastern provinces of Raqqa, Deir ez-Zor and Hasakah.

IS sleeper cells have hung leaflets on the gates of mosques, vowing to punish those who cooperate with the SDF. The war on IS is supposed to be over, but the battles are far from finished; September has provided numerous examples of this.

On Sept. 24, the Institute for the Study of War warned that IS "is preparing to free its loyal fighters and followers from prisons and displacement camps across Syria and Iraq." ISW referred to IS leader Abu Bakr al-Baghdadi's call Sept. 16 for his supporters to practice jihad, stressing the need to liberate his fighters and their families held by the SDF. Baghdadi ordered his fighters to target security people, investigators and judges at prisons where other IS fighters are held.

Meanwhile, the SDF said in a Sept. 21 statement that it had arrested three people suspected of being part of an IS cell responsible for the assassination of Legislative Council co-Chairman Marwan al-Fateh last year. IS was also blamed for a Sept. 17 explosion at a Kurdish security building in Diban, though no casualties were reported. Also that day, an official in the SDF's Deir ez-Zor military council and three of his bodyguards were injured after an explosive device planted in his car by unknown individuals went off near al-Omer oil field.

A military source in the SDF told Al-Monitor on condition of anonymity, “The unknown individuals are in IS cells that are very active, especially in the countryside of Deir ez-Zor. They mostly hide among civilians as ordinary people, making it easier for them to move around and plant explosive devices, which they often make themselves.”

The source added that IS recruits women in a significant way. “Most IS cells are made up of women who are hiding under the niqab and loose black clothes, which make it easier for them to transport and plant explosive devices and slip away among people without raising suspicions,” he added.

Earlier in the month, the SDF's media center said anti-terrorist units had killed three prominent IS officials: one was a senior security official known as Abu Harith al-Iraqi; one was in charge of assassination operations in Iraq and had responsibilities for Syrian-Iraqi border security; and a third was a security commander of the Iraqi province of Diyala in 2013.

The media center confirmed the cell had been holed up inside a tunnel north of al-Shadadi.

The military source said, “Those security officials resisted for several hours after their hideout was surrounded and didn't surrender until they were killed inside the tunnel, which was heavily fortified.”

The source said the SDF has arrested a large number of senior IS leaders in Raqqa and Deir ez-Zor, including Abdel Fattah Juma al-Abs, who was an IS security official in Deir ez-Zor; former IS leader Turki Mukhlif al-Rafdan (nicknamed Abu Harsha); and his son, Yasser al-Rafdan, in al-Horeiji. Earlier, the SDF killed top IS oil official Thabit Sobhi Fahad during an operation carried out in coordination with the international coalition in the village of Abu Hamam.

As the SDF intensifies its crackdown against IS cells and leaders, SDF military commander Mazlum Kobane warned in a Sept. 7 interview with CNN about the expansion of IS in Syria, especially in border areas, deserts and areas controlled by the Syrian regime west of the Euphrates River. He stressed the risk of IS returning and controlling eastern and northeastern areas of Syria, and he demanded that Washington and the international coalition provide more military and financial support for the fight.

Kobane also called on the governments of foreign IS militants held by the SDF to provide for the militants' forced return to their countries of origin or to establish an international tribunal east of the Euphrates to prosecute the fighters, as their presence remains a threat to the entire region.

One such case involves a Belgian — an alleged IS executioner accused of beheading more than 100 people. In an Aug. 30 story, the newspaper De Morgen said the SDF was holding Anouar Haddoushi, a prominent IS militant who has been on Belgium's terrorism list since 2016 and is thought to have funded attacks in Paris and Brussels. The newspaper said Haddoushi could wind up being tried in Belgium, France or even Iraq.