While some believe the Russian war on Ukraine has upped prices in northwest Syria, others accuse Hayat Tahrir al-Sham of exploiting the crisis to make gains. 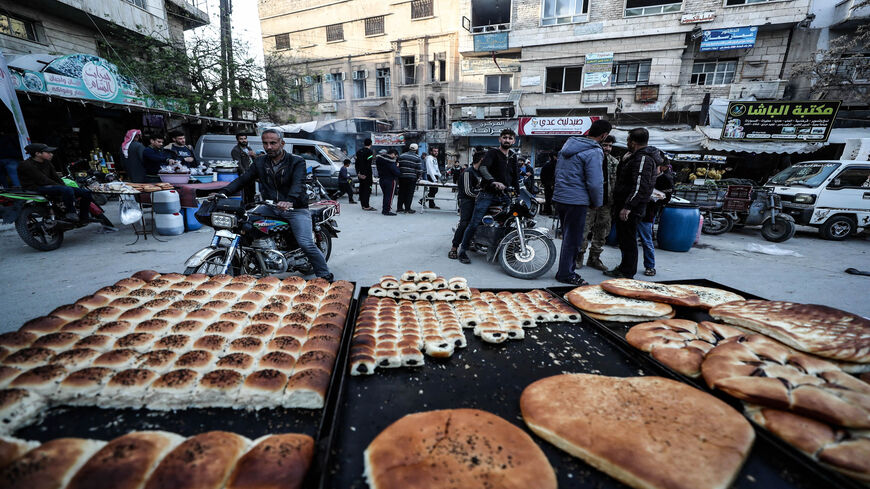 A street vendor displays pastries and bread, as Syrians buy food products at a market ahead of iftar, the evening meal that ends the daily fast at sunset, on the second day of the Islamic holy month of Ramadan, Ariha, Idlib province, Syria, April 15, 2021. - Omar Haj Kadour/AFP via Getty Images

The bakeries and grains department of the Syrian Salvation Government affiliated with Hayat Tahrir al-Sham (HTS), in Syria’s northwestern province of Idlib, reduced March 5 the weight of a bundle of bread by 100 grams, down to 650 grams, pricing the eight loaves at 5 Turkish liras ($0.34).

The move follows a hike in the price of flour imported from Turkey in tandem with the rise in the global price of fuels in light of the Russian war on Ukraine. The price rise in Idlib also hit several imported items such as sugar, vegetable oils, ghee and grains. All this comes amid a plummeting exchange rate of the Turkish lira against the US dollar.

Sugar, a basic baking staple, became almost nonexistent in Idlib before the Salvation Government announced that a new batch of products would soon arrive in the area, but at new prices. The government cited a global crisis and the expiry of some contracts. Thus, it seems HTS has created a crisis in the area and fabricated its solution in a maneuver aimed to inject some funds into its treasury.

HTS restricts the import of sugar to its areas of control to three traders close to it. It also forces them to buy the sugar HTS imports through other traders in the Turkish city of Mersin — which is then transported to Bab al-Hawa crossing — at the prices it specifies, with a $200 per ton difference from the original price.

The rise in the prices of daily consumables such as bread, foodstuffs, vegetables, animal derivatives, fuel and transportation has been exhausting civilians in northwestern Syria, where the worker's daily income ranges on an average between 20 liras and 30 liras ($1.35-$2.03). Amid the price rise, this average is no longer commensurate with the spending value. Hundreds of residents turned to sifting through landfills for plastic, metal or cardboard waste to sell them in order to make ends meet.

A media activist in Idlib told Al-Monitor on condition of anonymity, “This is not the only crisis hitting the area because of HTS’ policies that exclude competitors and monopolize the supply and trade of basic commodities. HTS does not care about food security in northern Syria. The chambers of commerce and industry — which grant merchants entry cards to Turkey in return for a set amount — are not renewing contracts with suppliers to import sugar or other basic goods, such as wheat, before their expiry.”

He added, “The other cause for the scarcity of sugar in Idlib is the smuggling of large sugar shipments toward areas controlled by the Syrian Democratic Forces (SDF) by merchants close to HTS in coordination with Newroz Consumer Company, which monopolizes the import and trade of sugar in SDF-controlled areas.”

Fadel Abdul-Ghani, director of the Syrian Network for Human Rights, told Al-Monitor, “The rise in prices in Idlib is due to HTS’ exploitation of the Russian-Ukrainian crisis. The consequences of this war cannot affect Syria immediately, but the local prices of basic materials have risen since the first day of the war in Ukraine.”

He said, “Also, revenues from the crossings and trade in Idlib flow directly to HTS’ treasuries with no financial reports being published on HTS’ economic plan, under which HTS raised prices and did not subsidize basic materials amid the poor living conditions in the area. There is no authority that can hold HTS accountable for its lack of transparency.”

Moreover, Watad Petroleum company, which monopolizes the fuel imported to Idlib city under the control of HTS, also raised fuel prices. The price of a gas cylinder jumped from $12 to $12.63. The price of 1 liter (0.26 gallons) of top-tier imported gasoline rose from $0.957 to $0.994, and 1 liter of second-quality imported diesel has increased to $0.970 from $0.920.

In mid-December, the company had set the price of fuel in US dollars, which was denounced by activists in northwestern Syria. HTS prevents other companies from importing fuel from the areas controlled by the Turkish-backed Syrian National Army factions in the countryside of Aleppo, or importing it from Turkey.

Orabi Abdel Hay Orabi, researcher at the Jusoor Center for Studies, told Al-Monitor, “Although HTS usually monopolizes foodstuffs and raises prices, this time it was not behind the rise in flour and fuel prices. This was caused by Russia's invasion of Ukraine. One may even say that prices in Idlib have not risen in proportion to outcomes of the Russian-Ukrainian crisis.”

Morshed al-Nayef, a Turkey-based freelance economic expert who writes for several Arab newspapers, agrees with Orabi. “The turmoil that led to the rise in global oil prices caused an increase in transportation fees of all materials and led to a global economic crisis,” he told Al-Monitor.

He noted, “The damage caused to the wheat supply chains in Ukraine has upped the price of bread and oil in Idlib. The controlling power cannot be held responsible for this."