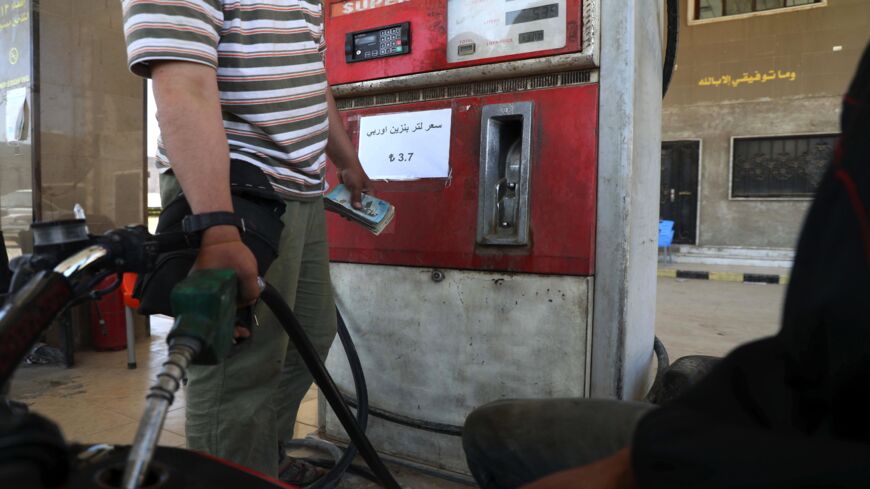 Gasoline prices are displayed in Turkish lira at a gas station in the town of Sarmada in Syria's northwestern Idlib province, on June 15, 2020. - AAREF WATAD/AFP via Getty Images

ALEPPO — Protests have occurred in Syria’s northwestern province of Idlib in recent days against the so-called Syrian Salvation Government (SSG), which is affiliated with Hayat Tahrir al-Sham (HTS). HTS controls the province. Protesters are calling on the government to provide basic services to the province and reduce the prices of goods and fuel, namely gas and diesel.

Dozens of protesters gathered Oct. 15 in al-Saa Square in central Idlib city to express their anger over the increase in prices of most basic goods. They raised banners with slogans such as “We are drowning in your salvation,” criticizing the SSG and its performance. Other slogans, to name just a few, included “No to inflation and corruption,” “Stop playing with people and robbing them,” “Keep the price of oxygen tanks down” and “Salvation Government sinking the ship."

Some protesters, wearing personal protective equipment amid the spread of COVID-19 in the area, denounced the living conditions as unbearable amidst the skyrocketing cost of living.

Protesters hold responsible the corrupt officials and traders who abuse power and are supporting citizens.

The exchange rate of the dollar reached 9.36 Turkish liras on Oct. 18, according to Doviz.com, which lists live exchange rates in Turkey.

Syrian families in Idlib suffer from the inability to make ends meet. Markets are seeing an unprecedented rise in food and fuel prices, as people also face high unemployment, high rent fees and a reduction in humanitarian support. Meanwhile, the SSG continues to impose royalties and taxes, and their proceeds go to the HTS treasury.

One of the protesters who took part in the demonstrations against the HTS government told Al-Monitor on condition of anonymity, “As a Syrian national living in Idlib, I call on the SSG to resign immediately. I ask for a new government that cares about poor people like me. Life here is no longer bearable, and if this failed government remains in power, the situation will get worse.”

Mahmoud Issa, another protester, told Al-Monitor, “HTS should stop oppressing people and taking their livelihoods. Their government only imposes taxes for sanitary products, cars, food and fuel. Yet it fails to complete its duties as a government and provides no support to services such as education, health, provision of bread and others."

Issa added, “Children in some households sleep hungry. Their fathers cannot afford bread because the monthly salary is no longer enough to cover a family's needs for half a month. Thousands of men cannot find work, and they eagerly wait for aid baskets (from nongovernmental organizations) to survive. The region is struggling with unemployment.”

Amid the protests, the SSG's Minister of Economy Bassel Abdul Aziz tried to justify the rise in commodity prices. Abdul Aziz was quoted on the government's official website on Oct. 16 as saying, “There are two main reasons for the continued rise in prices in northern Syria. The first reason is the global increase in energy and commodity prices. The second reason is the depreciation of the Turkish lira, which has lost more than 22% of its value since the beginning of this year. The dollar was worth about 7.5 Turkish liras, but today, its value reached the limits of 9.2 Turkish liras.”

Abdul Aziz also said the bakery sector in Idlib was largely affected by the depreciation of the Turkish lira, as well as the rise in the price of imported flour in recent months due to droughts that hit major wheat exporters.

According to Abdul Aziz, the price of a ton of flour rose to about $380, and the import rate is 82%. Local wheat crops do not exceed 18% of consumption, which means foreign markets exert control.