The depreciation of the Turkish lira against the US dollar has resulted in worsening living conditions in Idlib and increased the people’s resentment against Hayat Tahrir al-Sham and the Salvation Government, which they hold primarily responsible for the economic crisis. 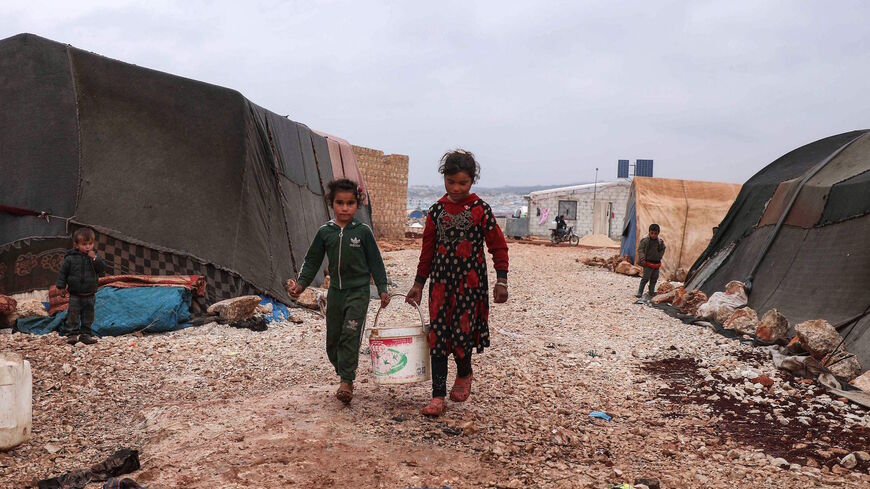 Children on Nov. 20, 2021, carry a bucket of water, in the Bardaqli camp for displaced people in the town of Dana in Syria's northwestern Idlib province, as winter approaches. - AAREF WATAD/AFP via Getty Images

ALEPPO, Syria — The depreciation of the Turkish lira against the US dollar has aggravated the cost-of-living crisis facing the population of Syria's Idlib province, which is under the control of Hayat Tahrir al-Sham (HTS) in northwestern Syria. The prices of everyday food items, including bread, increased sharply amid overall rises in the cost of living, especially for the poor, who make up the largest segment of Syrians residing in the region. Last year local authorities adopted the Turkish currency for official transactions amid a decline in the value of the Syrian pound.

The Turkish lira continues to lose value against foreign currencies amid expectations that it will continue its decline in value. The lira hit a record low of 13.45 to the dollar on Nov. 23, before slightly recovering to 12.7 to the dollar the same day.

Speaking at the Turkish Capital Markets Summit on Nov. 16, Turkish Treasury and Finance Minister Lutfi Elvan said that while inflation was not at "desired levels," as long as Turkey "continues the fight against inflation with a determined and wholesome understanding, the lira will become stable and our country's risk premium will decrease."

The Salvation Government, an administrative body affiliated with HTS, decided in June 2020 to adopt the Turkish lira in its dealings. At the time — when the exchange rate was 6.8 Turkish lira to the dollar — the head of the Salvation Government's economy department Bassel Abdul Aziz said authorities had instructed commercial traders and exchange offices to distribute Turkish lira so that the currency could be used "for everyday transactions in liberated territories instead of the Syrian pound."

The lira's recent nosedive in value has revived the same old problems, namely high prices, weak purchasing power for consumers, merchants manipulating prices, and a devaluation in salaries and wages.

Watad Petroleum, an oil company affiliated with the Salvation Government in Idlib, once again raised fuel prices as the value of the Turkish lira declined. The company linked the increase in price to the lira's deterioration, according to a post on its Telegram account on Nov. 20.

Many people in Idlib place the blame for the high prices on the HTS-affiliated Salvation Government, arguing its policies have exacerbated the economic crisis. On Nov. 17, the government reduced the weight of a standard bundle of bread to 450 grams, down from 500 grams. The bundle is sold at 2.5 Turkish lira, the equivalent to nearly $0.20, which many people in Idlib find difficult to afford.

Al-Monitor spoke about the current situation with Abu Muhammad, 60, who was displaced from the southern Idlib countryside and resides in a camp in the north of Idlib province. “We are 40 in the family, including my sons and their families as well. In light of the exorbitant price hike, we are facing difficulties in securing bread. My family needs 20 bundles of bread daily, but we can only afford 10 after the price increases,” he said.

Hudhayfa Hafez, a resident of the western Idlib countryside, told Al-Monitor, “The fall of the Turkish lira has had a huge impact on our lives. I work in a shop that sells vegetables and receive a daily wage of 25 Turkish liras, the equivalent to $2.25. This amount is no longer sufficient to buy food, and I had to borrow money in order to ensure my children have the basic necessities.”

An official in the Ministry of Economy and Resources in the Salvation Government who declined to be named told Al-Monitor, “The ministry will work on subsidizing bread. This will be reflected positively on the people in the coming days and will ease the burden of high prices.”

The official added that the authorities will work to provide bakeries with fuel at subsidized prices in order to reduce production costs, which will thus reduce the price of bread, in addition to increasing the electricity supply to bakeries in order to further reduce costs. He added that no taxes are being imposed on flour merchants or on the process of bread production, and they are working with the bakeries directorate to adjust the profit margin of private bakeries in order to protect consumers. He said that the government will maintain the current weight of a bundle of bread, which will be sold at reasonable prices throughout the duration of the Turkish lira crisis.

Saleh Abbas, a displaced man residing in Idlib, told Al-Monitor, “The decline in the value of the Turkish lira has had a major impact on the people for several reasons. Most importantly, people’s needs have increased with the arrival of winter. They need clothing and heating materials and are in urgent need of basic foodstuffs, such as ghee, oil, sugar and rice — as well as cleaning materials — and the prices of these materials have nearly doubled after the devaluation of the lira. The people are no longer able to buy them. As you see, there are almost no shoppers in the markets.”

Abbas added, “HTS and its Salvation Government are mainly responsible for this because they monopolize the trade of all goods through merchants affiliated with them, and these merchants raise prices without taking into account the conditions of the people. It is a failed government that must leave.”

The depreciation of the Turkish lira was particularly felt by the people in Idlib through high prices of various imports. This is while the people are paid their salaries and wages in Turkish lira, including local council employees, teachers, nurses, construction workers, Salvation Government employees and other professionals.

Mohsen Ghosn, a Saudi jihadi who is not affiliated with HTS and resides in Idlib, wrote on Twitter that the work of "the liberator" — in reference to HTS' name, which means the Levant Liberation Committee — “does not consist in carrying out construction, paving roads, building parks and suppressing critics, but rather in feeding the poor, facilitating matters, ending taxes and providing job opportunities."

Issam al-Khatib, a judge who defected from HTS, accused the ruling group and its government on Twitter of being the reason behind the high cost of living and economic crisis in Idlib after they opened the smuggling crossings with the Syrian regime, through which various goods flow. He said, “In a step that increased the Idlib people’s economic suffering, HTS leader Abu Mohammed al-Golani renewed opening the smuggling crossings with the regime in the past few days, and many cargo trucks crossed to the areas under the enemy's control, which led to a further rise in prices in Idlib."