Displaced Syrians in Idlib are replacing bakery bread with handmade bread, turning to traditional methods during the area's food shortage. 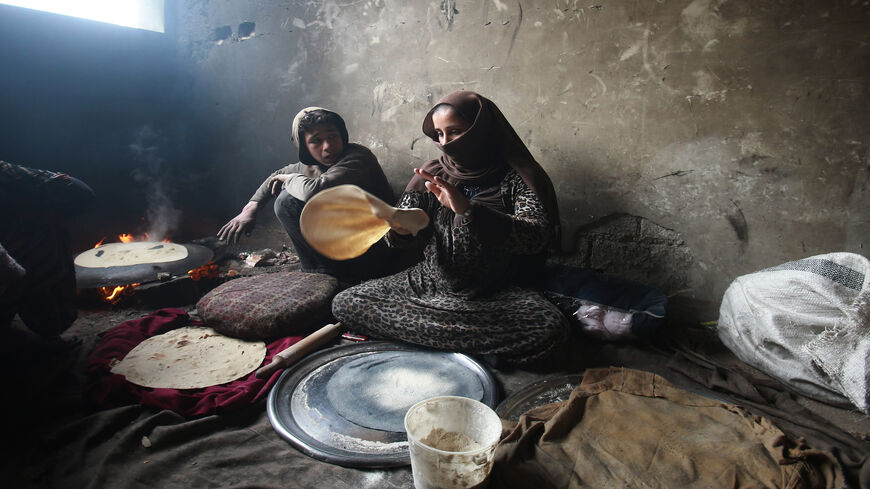 Syrians cook bread inside a school turned into a shelter for people displaced by the war, in the rebel-controlled town of Hamouria, in the eastern Ghouta region, Syria, Dec. 23, 2017. - Abdulmonam Eassa/AFP via Getty Images

ALEPPO, Syria — Many Syrians in Hayat Tahrir al-Sham-held Idlib, in northwestern Syria, are resorting to ancient bread-making methods, at home or in their tents in camps for internally displaced persons (IDPs), due to the bread crisis caused by price rises and insufficient bread products available.

Using the saj, a wood-fired metal griddle for baking flat bread, women in Idlib are making traditional bread, which is less expensive than buying it from bakeries, where prices have increased significantly following the depreciation of the Turkish lira in the last few weeks.

Turkey's lira plunged as low as 14 to the US dollar, according to Doviz website.

A bundle of bread is sold at 3.5 Turkish liras ($0.25), and people are queuing in front of the bakeries to buy it.

Every day at dawn, Sawsan Nasr, who resides in a camp for IDPs in the western Idlib countryside, makes saj bread before her five children and husband wake up.

She told Al-Monitor, “My mother taught me how to make saj bread. This is very helpful in light of the high bread prices today. When I was little I complained whenever my mother asked me to make saj bread. Who knew that I would need that skill one day.”

She said that making saj bread is part of the traditions in many Syrian governorates. “Saj bread is desirable not only as a substitute for bakery bread, which has become expensive, but also for its unique taste that my children love a lot,” she added.

She said, “You have to get up early to knead the dough after sifting and cleaning the flour before leaving it for an hour to rise. Then you divide the dough into pieces and prepare the fire to bake it on the flat plate. The dough pieces need to be rolled and flattened to become very thin before being placed on the metal griddle.”

Jawad Rahmoun, a displaced man from Maaret al-Numan who resides in a camp near the city of Sarmada, north of Idlib, told Al-Monitor, “The children usually collect nylon, dry sticks and any other object that help start the fire under the metal griddle. The mothers usually keep large quantities of these materials in the tent to start the fire and bake bread.”

He noted, “Most of the displaced families residing in the camps cannot buy firewood. One kilogram [2.2 pounds] of firewood costs more than $1.50. The saj bread does not cost much. They just need flour, water and salt. The families in the camps usually receive flour as part of food rations that the relief organizations provide monthly.”

Many women in the IDP camps in Idlib are now making saj bread to make ends meet and enhance their living conditions. Many families do not know how to make saj bread, which prompts them to buy it from women who have the skills.

Samira Qassem is a displaced woman from Aleppo countryside who resides in a rented house on the outskirts of Idlib city. After her husband died in the war, she started making bread to earn a living and cover the expenses of her six family members.

She told Al-Monitor, “After my husband’s passing, I could not find a job. Then I decided to take advantage of my skills in making bread and started working two years ago. There is high demand for the bread I make, especially among the owners of restaurants that serve shawarma and grills.” Qassem sells 1 kilogram of saj bread at 3 Turkish liras ($0.21).

Saj bread is not the only traditional way to make bread in Idlib governorate. Tannour bread is another type of bread that few Syrian women in Idlib have the skills to make. It is very popular among peasants in the Syrian countryside. The Tannour bread is baked in a cylindrical clay oven; flat dough is pressed against the interior wall of the oven until it is baked.

Very few women know how to make Tannour bread because it requires a different set of skills, and a lot more time than saj. The clay oven is also used to bake all kinds of pies including those stuffed with cheese and hot peppers.