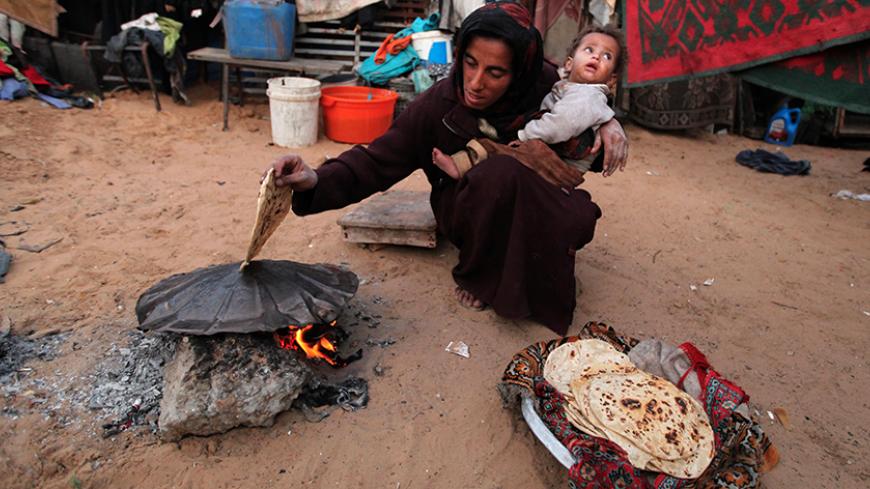 A Palestinian woman holds her son as she cooks bread over a wood fire in Gaza City, Jan. 21, 2012. - REUTERS/Mohammed Salem

GAZA CITY, Gaza Strip — A number of passersby stopped outside Skafi Bakery in central Gaza City, where Mohsen Skafi, 19, was creating large, thin circular shapes by quickly tossing and flipping dough before baking them on a saj oven. "Saj" bread, cooked on a convex metal plate heated over a fire, is part of Palestinian heritage. This type of bread is also known as "markouk" or "shrak" in the Gaza Strip.

While Skafi was making saj bread, he told Al-Monitor, “Although baking this type of bread is an old tradition in Palestinian society, and although there is a variety of modern breads available in the market such as French baguettes … it is still an important staple for Gazans and a key ingredient of some Eastern dishes such as fatteh, which most Palestinians make every Friday. Fatteh consists of boiled chicken or other meat with white rice and saj bread, soaked in meat gravy and garnished with pine nuts. Saj bread is also used for the Palestinian dish musakhan, which consists of small pieces of chicken blended with chopped onions, olive oil and sumac, grilled and placed inside saj bread, until it looks like a wrapped sandwich.”

Skafi explained how saj bread is made. “The dough is made of a mixture of flour, salt and lukewarm water. The ingredients are mixed and kneaded until they turn into a soft and sticky dough. The dough is divided into several portions, forming a small ball with each. Some flour is sprinkled on top of the dough to prevent the small balls from sticking to the baker's hands while dividing it. Then each ball is flattened using a rolling pin. The baker further flattens the dough by repeatedly and quickly flipping and tossing it until it is much larger. It is then transferred to the convex metal plate using a small cushion. Once on the metal plate, the flattened dough only needs a few seconds before it's ready,” he said.

He explained that in the past, saj bread was baked at home in a pleasant family atmosphere using firewood. These days, women rarely make saj bread at home, due to increased domestic responsibilities and urbanization.

Skafi's customer Abu Ahmed Rashid told Al-Monitor, “The good thing about saj bread is that it is not made in the bakeries’ corridors and rooms in the back, as the other types of bread. Rather it is made in special areas at the entrance of a bakery or on the sidewalk. The baker’s skills of rapidly flipping the dough between his hands without ruining it encourages people to buy it.”

Rashid said that his family eats saj bread instead of regular bread with all of their meals as a way to celebrate their Palestinian heritage. He also said that he wants to eat fresh bread that is more healthy than the machine-made breads.

Gazans’ demand for bread is not limited to saj bread with its traditional character. The ancient taboon bread is another type in high demand. Murad Qayed, 22, makes it every morning and sells it in his small bakery located in the popular Firas market in central Gaza City.

Passersby smell the freshly baked bread from hundreds of feet away and are drawn to the bakery.

Qayed makes small balls of dough and flattens them with his hands. He places them on a cushion and sticks them to the interior wall of the oven. Once baked, he takes the loaves out and serves them fresh to his customers.

The taboon oven is made of a mixture of clay and straw in the shape of a box with a circular opening on top. It's tall enough for four or five flatbreads at a time to be placed on its mud walls.

Qayed told Al-Monitor, “There is good demand for this type of bread. Sometimes there is high demand, as it is a Palestinian heritage item, and because Gazans want to hold on to ancient heritage in the face of urbanization.”

He said taboon bread is different from saj bread in that it is a medium-sized flatbread baked in a special oven for 50-70 seconds. Saj bread is baked for only a few seconds.

Housewife Samah Amoudi was among the customers waiting to buy taboon bread from Qayed. She told Al-Monitor, “What makes me buy the bread is the unforgettable taste. This is why I buy it every day.”

She said, “Taboon bread is part of the few heritage items that we are still fighting to preserve in Gaza. It tells us that ancient life in Gaza used to be beautiful.”

Nasser al-Yafawi, an expert on Palestinian history and heritage, spoke to Al-Monitor on the re-emergence of taboon and saj bread in Palestine. He said, “The Palestinian bread was first made with the emergence of the Natufian civilization in Palestine, nearly 10,000 years ago, when people used to place black stones inside a fire pit called 'malleh.' Once the fire was extinguished, the milled wheat mixed with small pieces of vegetables such as tomatoes and celery was placed on the hot stones. A few moments later, it would turn into bread.”

He said that several Palestinian civilizations have used this method, including the Ghassulian and Wadi Gaza, when the taboon oven was created in 3200 BCE. With the start of the Canaanite civilization around 3000 BCE, the Canaanites became familiar with the so-called local oven in the mountainous areas, particularly Hebron in the southern West Bank. Local ovens are circular ovens made out of clay with a dome-shaped opening on its side, in front of which the baker sits to place the dough in the oven cavity, called the firehouse. On the bottom is a pit for burning firewood.

In regard to saj bread, Yafawi said, “The Palestinians started to make this bread after the local oven was invented. It is a form of urban development, where a metal plate used to be placed over a burning firewood in front of old Palestinian dwellings.”

Although bakeries that make bread with machines and different types of modern bread are widespread in the Gaza Strip today, Palestinians still consume the traditional saj and taboon bread as part of their ancient popular heritage. “The people residing in mountainous areas are still making saj bread, while the practice of making taboon bread is very popular among peasants and Bedouin in the desert and plains,” Yafawi said.