Hayat Tahrir al-Sham leader Abu Mohammed al-Golani is subsidizing the rapidly increasing cost of bread in Idlib in response to growing resentment against his organization. 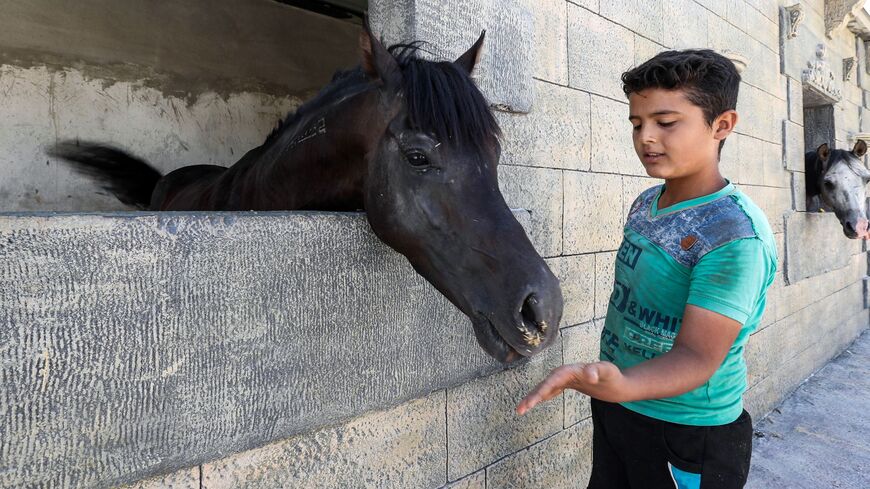 A boy feeds a horse "Najm al-Layl that belonged to Tauqir Sharif, a self-described aid worker stripped of his British nationality and detained by HTS jihadis, in the town of Atme in Syria's rebel-held northwestern Idlib province, on July 1, 2020. - OMAR HAJ KADOUR/AFP via Getty Images

ALEPPO, Syria  — Abu Mohammed al-Golani, the leader of Hayat Tahrir al-Sham (HTS), has pledged to provide $3 million to subsidize bread after HTS-controlled Idlib experienced a severe bread crisis and a general economic crisis, following the depreciation of the Turkish lira against the US dollar.

The population in Idlib governorate, northwest Syria, is suffering under an unprecedented rise in prices. People could no longer afford to buy bread; some resorted to Tannour bread, which is less expensive than bakery bread.

Prices have increased following the depreciation of the Turkish lira against the US dollar, as transactions in the area have been conducted in lira instead of the Syrian pound since 2020. The Turkish lira is currently being traded at 12.90 to the dollar, according to the exchange rate website Döviz.

On Nov. 23, Golani stated that he will be subsidizing bread during a meeting with the HTS’ Shura Council attended by HTS leaders, and ministers from the HTS-affiliated Salvation Government. They discussed ways to subsidize fuel and wheat in order to maintain the bundle of bread at a specific price and size, as well as a strategy to overcome crises in the future.

Around 40 bakeries run by the Salvation Government will benefit from the $3 million subsidy, provided that a bundle of bread weighing 600 grams is priced at 2.5 Turkish liras, equivalent to approximately 20 cents.

During his speech, Golani came across as a state leader speaking before members of Parliament. He even employed the term “state” several times while speaking about borders, the economic crisis, and developments in the industrial, agricultural, commercial, and service sectors.

“Bread will now be subsidized as an emergency measure, through which government bakeries will benefit,” Golani said, adding, “We have no food security that meets the needs of the people in Idlib at the moment.”

Golani noted, “Our areas have fertile agricultural lands, and we have been working on many agricultural plans for years to overcome crises, such as the current bread crisis. We have finished discussing ideas to increase the area of arable land through which we will secure enough basic foodstuffs.”

HTS is also working on problems such as education, schools, sanitation, roads, and housing, Golani said, but "we need some time to reap the fruits of our plans and projects.”

Speaking about unemployment, Golani pointed out, “We have provided nearly 2,500 job opportunities in quarries, road works, and others, through the development projects that we have started in the area. … Every official in Idlib must face these responsibilities wisely and not evade them; we would be wrong to stand idly by.”

A jihadi anti-HTS source residing in Idlib told Al-Monitor on condition of anonymity, “It was remarkable for Golani to be addressed as the HTS leader during the Shura Council meeting and not as a commander of a jihadi group, classified as a terrorist organization. … During his speech at the Shura Council, which he made seem like a miniature Syrian parliament, Golani wanted to show that he now has a strong popular base in Idlib.”

The bread crisis and the economic crisis in general has created resentment against HTS, the source said, and "This is why Golani rushed to allocate $3 million to subsidize bread after he had been absent for over two months. He did this before the Shura Council, which is similar to the People’s Assembly of Bashar al-Assad’s regime and includes a large group of cheerleaders loyal to the dictator, and in both cases, they do not represent the people they claim to represent.”

The HTS’ Shura Council was established in early 2019. The council’s tasks include enacting laws, following up on the work of the Salvation Government, appointing a prime minister, and approving ministerial formation.

The council’s first session ended in August, and the HTS held elections to choose new members in September. Areas were divided into electoral districts, the number of members representing each district was determined according to the population census in each, and the displaced were represented according to their current areas of residence.