Could this be the last battle for Aleppo?

Opposition factions in southern Aleppo have made significant advances after launching attacks in response to the one-month-long siege imposed by the regime on Aleppo’s eastern neighborhood. 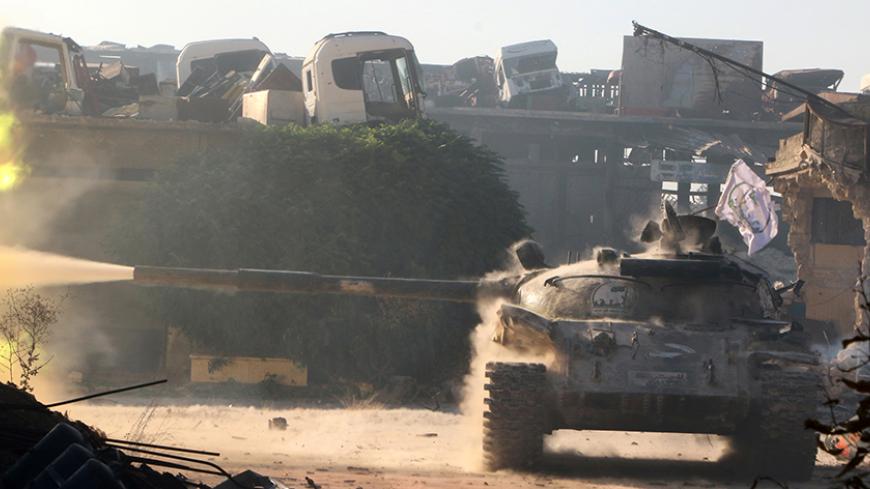 Inside opposition-controlled neighborhoods, which have been besieged for almost a month by the Syrian regime, the scene changed completely when the battles erupted July 31. The residents’ moods shifted from confusion and anxiety to a state of optimism that their suffering under the siege was coming to an end. In the meantime, clouds of black smoke billow in the sky as a result of the residents’ burning of tires to prevent regime warplanes from identifying targets.

The residents of Aleppo try to get on with their lives in the early morning hours as warplanes hover in the sky. At times, the regime fires its mortar and artillery shells on Aleppo’s neighborhoods when battles start a few hours before sunset. While these battles raise the fears of citizens, the fighting also gives the residents hope that the siege will end soon.

Britta Haji Hassan, board chairman of the Free Aleppo Council, told Al-Monitor that than 320,000 people are besieged within the opposition-controlled neighborhoods of Aleppo. Extremely difficult and inhumane conditions could be in store for the residents should the blockade continue amid the lack of fuel and the gradual depletion of food stocks.

Yusuf al-Muhajir, spokesman for the Ahrar al-Sham movement, one of the factions taking part in the Aleppo attack, told Al Jazeera channel Aug. 2 that the attack aims to end the siege plaguing the residents of the city of Aleppo; he said the achievement of this goal is imminent.

However, Abu Bashir Maara, the military commander of the Aleppo Liberation operations room, which is affiliated with the Free Syrian Army (FSA), said Aug. 2 that the battle will not stop until the entire city of Aleppo is under opposition control, and that the first phase of the battle aims to break the siege imposed by the regime on opposition-controlled neighborhoods.

The opposition’s preparations and the huge potential employed in the attack suggest that the action is not only aimed at lifting the siege, but also at seizing the regime-controlled western neighborhoods.

The attack involves 22 opposition factions, most notably the Sham Legion (Failaq al-Sham), Jaish al-Fatah (Army of Conquest), which includes several groups such as Ahrar al-Sham and Jabhat Fatah al-Sham (Jabhat al-Nusra), along with the Aleppo Liberation operations room, which includes the FSA factions in Aleppo.

On the first day of the battle, which was called “The grand epic of Aleppo,” the opposition made significant progress in south Aleppo and gained control of two hills — Moota and Ohod — as well as the 1070 apartment complex in the Hamdania neighborhood. On the second day, the opposition seized al-Shurfa village and moved into parts of Ramouseh, south of Aleppo.

On the third day, however, this progress subsided as opposition forces started defending the areas they had gained control of. Meanwhile, the opposition-affiliated Jaish al-Fatah announced that it had repelled a regime attack on the 1070 apartment complex amid pro-regime media reports saying the regime had rolled back rebel gains in areas such as Telat al-Mahroukat, al-Amriyeh village and al-Jamiat region. The opposition provided some confirmation of this when it announced Aug. 4 the start of an attack to retake the latter region.

It does not seem that the aim of the Aleppo battle is to reopen the Castello Road, in northern Aleppo, that was cut by regime forces July 7; rather, it aims to secure a new supply route for the opposition that crosses Ramouseh.

This battle is a life or death battle for both parties. Not only would the opposition forces’ seizure of Ramouseh break the siege of the eastern neighborhoods, but it would also cut the main supply route leading to regime-controlled areas. While this supply route is still passable, the FSA released a video Aug. 3 showing a military vehicle belonging to Lebanese Hezbollah being targeted on this route.

Just a few days ago, President Bashar al-Assad's regime forces seemed victorious in Aleppo, especially after they took control of the Bani Zeid and Leiramon neighborhoods in north Aleppo, and imposed a siege on the opposition-held eastern neighborhoods. This siege was what pushed the opposition forces to launch this massive attack on the city of Aleppo, and Jaish al-Fatah and Sham Legion’s joining of the battle of Aleppo seems to have changed the equation, especially considering that both factions were the main forces that managed to take control of the province of Idlib in March 2015.

The Aleppo battles are now raging between the opposition and the regime more fiercely than ever before, and they seem to be headed toward a fast conclusion.

by Murielle KASPRZAK and Joseph SCHMID | AFP | May 26, 2022
END_OF_DOCUMENT_TOKEN_TO_BE_REPLACED