Why Assad may be helping Islamic State’s offensive

The latest regime airstrikes against rebels in Aleppo’s northern countryside seem to benefit the Islamic State, but also help the Syrian government divide its enemies. 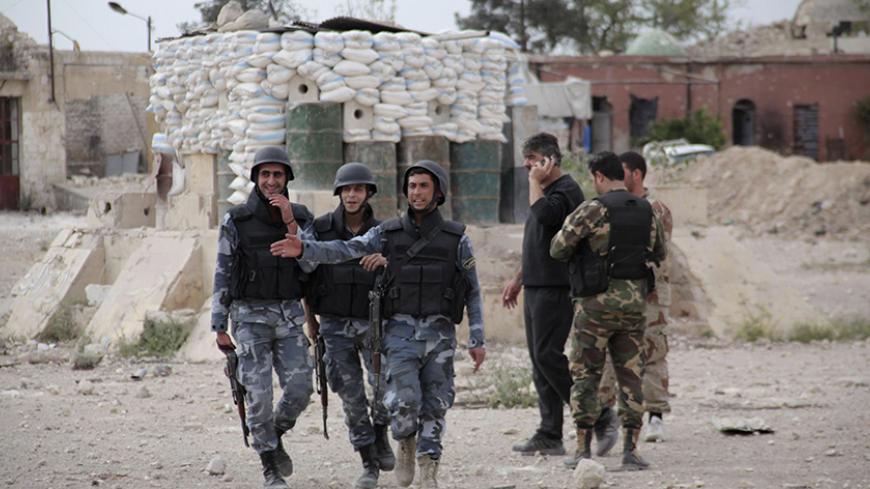 Forces loyal to Syria's President Bashar al-Assad walk inside the government-controlled Hanano barracks after what they said was an offensive against them by Free Syrian Army fighters in Aleppo, April 17, 2014. - REUTERS/George Ourfalian

ALEPPO, Syria — Airstrikes by President Bashar al-Assad’s regime on rebels in the northern countryside of Aleppo raise the question of why regime forces seem to be supporting the latest offensive of the Islamic State (IS). This support came through regime air raids on towns under the control of rebels close to the front lines with IS, where violent clashes have been ongoing since May 31.

Among the towns bombed by regime aircraft, four were part of a direct front line between the rebels and IS, among them Marea, Tlalin and Tell Qara, while 13 others formed part of a network of supply routes and staging areas for rebels on their way to fight IS, such as Tell Rifaat, Herbel and Ihras.

The intensity of the bombing that Aleppo’s northern countryside was subjected to, in conjunction with IS’ attack, seemed to further confirm that these were not regular regime strikes against areas outside of its control as shown in the map below. What’s even more important was the fact that villages that had not been targeted for a considerable period of time were now bombed by the regime in conjunction with IS’ attack on rebel forces in Tlalin, for example, which had not been bombed since July 2014, and Herbel, which had been spared since August 2014. 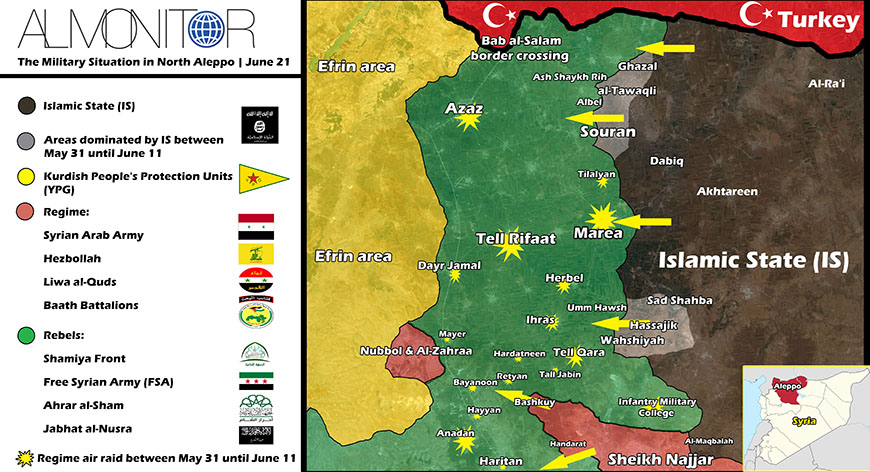 Despite the fact that IS must be benefiting from these strikes, it cannot be said that Assad and IS are allies. The regime has fought IS before, incurring heavy losses in materiel and troops in August and September of 2014, when IS attacked the Tabaqa military airport and the Shaer oil field. What then drives Assad to help IS on the battlefield?

There are two main reasons. The first is the region’s importance to the rebel forces. Aleppo’s northern countryside is considered to be one of the largest rebel strongholds with access to Turkey, as well as the rebels' only gateway to the city of Aleppo.

On Feb. 17, the regime tried hard to isolate the northern countryside from the rest of the areas that are under rebel control to blockade the city of Aleppo by attacking the towns of Hardatneen, Retyan and al-Mallah. But, regime forces were met with stiff resistance by the rebels, who considered the battle to be a matter of life and death. As a result, 300 regime troops were killed, according to statements made to Al-Monitor by the former military commander of al-Jabha al-Shamiya (Shamiya Front), Lt. Col. Abu Bakr.

IS’ advance in Aleppo’s northern countryside is sure to weaken the rebels there; as a result, the regime will achieve, with minimal losses, its goal of besieging the rebels in Aleppo city, as the only supply route to it is the Castello road.

The second reason for the recent strikes against rebel areas is that the Assad regime faces two main foes in Syria: IS, against which the United States is leading an international coalition, and rebels backed by a variety of regional powers, most notably Turkey, Qatar and Saudi Arabia. In that context, it is only logical that the regime would prefer eliminating an enemy that receives backing, weapons and funds from regional sources, and leave the task of weakening its primary enemy, IS, to the international coalition. Consequently, the regime’s presumed elimination of Syrian rebels would force the international community and the factions that back those rebels into allying themselves with Assad to finish off IS.

In that regard, the Syrian-Turkish border is the main avenue for the delivery of arms from backers to the rebels. Reaching the Turkish border seems impossible for regime forces at the moment as it would require them to completely eliminate rebel presence in Aleppo’s northern countryside. In contrast, IS is only 12 kilometers (7.5 miles) away from the Bab al-Salam crossing, and its advance from the town of Ghazal (north of the town of Souran) toward Bab al-Salam in the west would lead to the isolation of rebels in Aleppo from the Turkish border, which is the regime’s ultimate goal.

The regime has been enduring difficult times, since Jaish al-Fatah — a joint force comprised of a number of opposition forces such as Ahrar al-Sham, al-Sham Legion and Jabhat al-Nusra — spread its control over wide swaths of land in Idlib province March 18, from the city of Aleppo to Ariha, Jisr al-Shughur and the Mastouma military base. Jaish al-Fatah’s fast advance and the arrival of the rebels to the Syrian coast, which is the regime’s main stronghold and primary human resources’ reservoir, puts the regime at risk.

Aleppo has witnessed the same experience as Jaish al-Fatah in Idlib. On May 3, most opposition forces — with the exception of Jabhat al-Nusra — formed a joint “Battle of Aleppo” command center, with the aim of completely controlling Aleppo city, half of which remained under regime control. No sooner had the joint command center organized and expanded to include 31 opposition factions than IS launched its attack on Aleppo’s northern countryside.

As a result, instead of fighting the regime in Aleppo, the first task undertaken by that command center was to retake the village of al-Bal on June 12, which was overrun by IS on June 1. In that context, the joint command issued a statement May 31 that read: “We intend to repel [IS’] attack and recover the towns that the latter took over. … Doing so shall not interfere with our preparations for the battle of Aleppo.”

As such, the rebels’ attack on the regime in Aleppo has been postponed. And, even if they did launch said attack, it would be a weak one as long as their back remains exposed in Aleppo’s northern countryside. Furthermore, on June 2, the Ahrar al-Sham movement — which formed the main body of Jaish al-Fatah in Idlib — withdrew some of its troops and repositioned them north of Aleppo to counter IS’ attacks. All of these developments were beneficial to the regime, which aims to postpone any attacks against its forces and divide the rebels along two fronts: those fighting Assad and those fighting IS.