In light of divisions among rebel factions, it appears the battle for Aleppo will be long and drawn out, unlike the rapid progress they made in capturing Idlib. 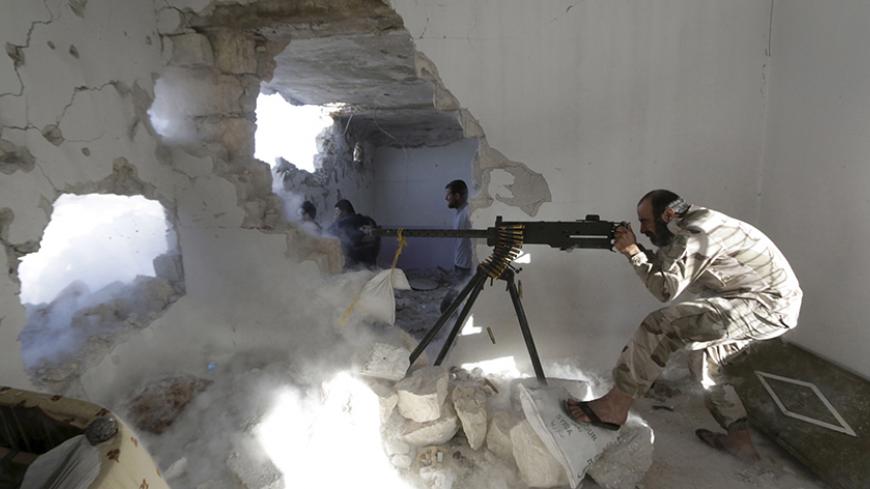 A Free Syrian Army fighter fires a weapon inside a damaged building during clashes with forces loyal to Syria's President Bashar al-Assad in Handarat district, north of Aleppo, May 21, 2015. - REUTERS/Hosam Katan

REYHANLI, Turkey — Rebel forces have scored gains in recent months in northern Syria, but the type of swift progression they made in Idlib province will be difficult to replicate in Aleppo, Syria’s economic heartland, where the rebels as well as forces loyal to the regime are heavily entrenched.

Jaish al-Fatah (Army of Conquest), which advanced in Idlib and has had several branches pop up around the country, including Qalamoun, has established an operating base dubbed Fatah Halab (Conquest of Aleppo) in Aleppo. On July 21, it had announced the launch of an attack against al-Foa and Kafr, two Alawite villages in Idlib still in the hands of the regime, in retaliation for an onslaught against Zabadani, an area close to the Lebanese border, by Hezbollah and the National Defense Forces.

The consolidation of rebel groups — namely, Jabhat al-Nusra, Jund al-Aqsa, Ahrar al-Sham, Liwa al-Haqq, Jaish al-Sunna, Ajnad al-Sham and Faylaq al-Sham — under the banner of Jaish al-Fatah in March, and their swift advance in Idlib have been attributed by experts to a détente and alignment of interests between Qatar, Saudi Arabia and Turkey.

According to a rebel in Reyhanli from Nur al-Din Zanki, other factors also played into the newfound coalition of Idlib factions. Speaking to Al-Monitor on condition of anonymity, he said, “Jabhat al-Nusra became the biggest player there by getting rid of its major opponents, such as Harakat Hazm and the Syrian Revolutionary Front, which facilitated the unification of Islamist groups under one banner.”

The above factors that help explain rebel successes in Idlib are absent in Aleppo, which lies 35 miles away. “Aleppo is a much bigger province than Idlib, and one neighborhood, such as Salahuddin, is as big as the city of Idlib,” Col. Abdel Jabar Okaidi of the Free Syrian Army (FSA) told Al-Monitor.

As fighters stressed, while 500,000 people live in Idlib, Aleppo province is home to several million. “The fact that it is the economic capital of the country means that it is of strategic importance to the regime, which has invested a lot of manpower in the battle,” Okaidi said.

In addition, unlike Idlib, Aleppo has more military positions, such as Kulliyat al-Moushat, a military academy, as well as radar launch pads and Battalions (Fawj) 46 and 111. Aleppo is also home to a host of rebel factions, mostly belonging to the FSA, and a few Islamists brigades.

The establishment of the Fatah Halab base has allowed for a certain level of consolidation. More than 15 factions have assembled around it, including the al-Sham Front, Nur al-Din Zanki, al-Safwa Brigade, Faylaq al-Sham, Fastaqim Kama Umirt, the Dawn of the Caliphate Brigades and Battalion 16. Some of these groups are affiliated with the Turkish military operations center (MOM) and have received US-made anti-tank TOW missiles and training in Saudi Arabia and Qatar, said fighters allied with MOM.

Islamist factions, among them Jabhat al-Nusra, Jund al-Aqsa and Abu Amara Brigades, have joined an operations base called Ansar al-Sharia. According to Okaidi, the initial plan to establish a single base had been hindered by an Islamic State-led offensive more than two months ago.

While the current structure of the Fatah Halab base has allowed for better coordination, it is still decentralized consisting of several bases, one in each designated area. “This is not the case in Idlib, where one operating center and one leadership are responsible for all the military operations,” said Lt. Hassan Khalil from the Suqour al-Jabal group.

Aleppo’s rebel scene is also marred by personal and political rivalries. One is rooted in the allegiance of several factions — including Tawheed (currently rebranded al-Jabha al-Shamiya), Thuwar al-Sham and Jaish al-Mujahideen — to the Muslim Brotherhood.

The source from Nur al-Din Zanki commented, “The Muslim Brotherhood initially bestowed a lot of money on certain factions while excluding others, which exacerbated tensions among the various groups.” He also said that corruption plagues rebel groups in Aleppo, with some selling their weapons for money, depleting their stocks. “IS has deep pockets, which means it is the biggest winner in such deals,” he remarked.

The presence of IS in Aleppo is another factor in the dispersion of rebel forces in the city, unlike in Idlib, where it had no forces. A 37-mile front line with IS, stretching from the Turkish border to Aleppo, has compelled rebels to spread their divisions along multiple fronts to fight the regime as well as IS.

Rebels consider the war against IS a complicated matter due to social and religious issues. Khalil explained that many Aleppo families, especially in the Reef, or rural areas, have divided loyalties, with some members fighting alongside the rebels and others with IS.

“Rebels have apprehensions when fighting IS because they worry they might kill a member of their family in the battle,” Khalil said. That IS and the rebels are both Muslims also adds to concerns.

Military strategy is another point of friction among the rebel groups. “In Idlib, Jaysh al-Fatah adopted a unified position. In Aleppo, rebels disagree on what areas to target and who to fight first, IS or the regime,” the source said.

The city currently is divided into a large pocket where rebel groups are heavily entrenched, representing more than 60% of the city’s area, and its surrounding two sides, held by troops loyal to Assad, according to the fighters interviewed by Al-Monitor.

Some rebels, such as the Nur al-Din Zanki Brigade source, believe that priority should be given to the fight against IS while keeping the regime busy on smaller fronts or cutting its supply lines. Others, such as Okaidi, want to prioritize targeting regime military positions in western Aleppo, namely, the airport area and the military academy, while avoiding targeting civilian areas.

Given the differing visions among the rebels, the battle for Aleppo appears to be one that will last for a while, perhaps until one winner can take it all. The recent decision by Turkey to join in the war against IS in northern Syria might help the rebels advance in rural areas held by the organization.