What the Aleppo offensive hides

The battle for Aleppo may be a long and costly battle for Syrian regime forces due to the size of the city, the remaining large civil population and the multitude of players. 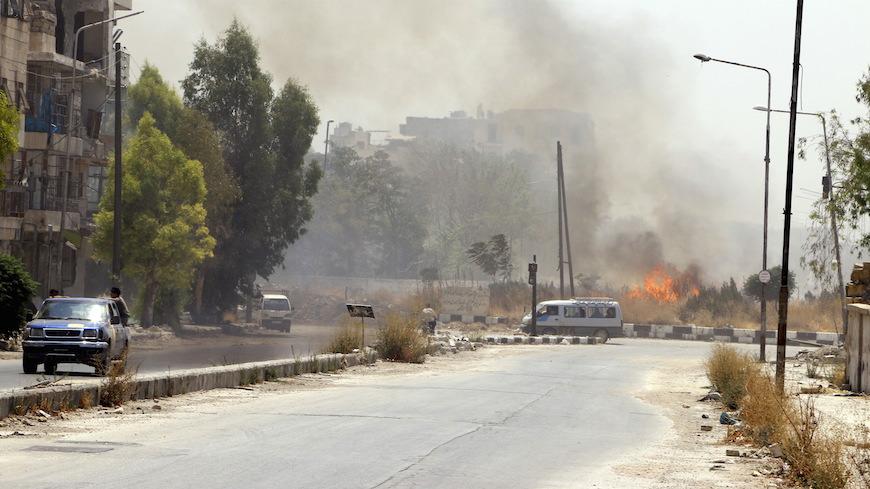 The much-touted attack on Aleppo launched on Oct. 16 has been dovetailed by regime advances in the southern rural areas of Syria. Yet the takeover of the largest Syrian city may prove to be a long and costly battle that President Bashar al-Assad’s regime cannot afford, despite Russian air support. In addition, it may not be the regime’s first priority, as its forces are eyeing supply routes on the city’s southern flank.

Thousands of Shiite militiamen were deployed on Oct. 19 in the Aleppo region under the command of Maj. Gen. Qasem Soleimani, from Iran’s elite Quds Force, in an attempt to recapture Aleppo, as reported by The Washington Post quoting officials from three Iraqi militias. The Iraqi Shiite militia, Kataib Hezbollah, has sent approximately 1,000 fighters from Iraq, who are fighting alongside 2,000 members of the Iranian Islamic Revolutionary Guard Corps.

“The control of Aleppo is essential to President Assad’s national legitimacy. Syria was created after the First World War by the union of the provinces of Aleppo and Damascus. Losing Aleppo would mean for Assad that he is the president of half the country. Strategically, Aleppo is vital to regaining the northwest [the provinces of Idlib and Aleppo] and the control of the Turkish border, directly or via the Kurds,” Syria expert Fabrice Balanche, from the Washington Institute for Near East policy, told Al-Monitor.

The battle for Aleppo has been witnessing ebbs and flows for the last three years. The Syrian army was able to lift the siege of Aleppo in spring 2013 and patiently encircled rebels in the eastern districts. In February 2015, its attempt to cut the last road linking Aleppo to eastern Turkey resulted in failure, with rebels reinforcing their positions, explained Balanche.

The city is currently divided between regime forces and the opposition, the first occupying the western flank of the city, specifically strategic locations such as the Military Academy, Keliat al Madfaiya (Canon Academy) and the Air Force Academy, according to activist Ahmad, speaking to Al-Monitor from Aleppo.

The opposition controls around 60% of the city and is run by two different operating rooms, according to Col. Abdel Jabbar al-Okaidi from the Free Syrian Army. The first operating room is that of Fatah Halab (Conquest of Aleppo) in Aleppo, which includes more than 15 factions that have assembled around it, including the al-Sham Front, Nur al-Din Zanki, al-Safwa Brigade, Faylaq al-Sham, Fastaqim Kama Umirt, the Dawn of the Caliphate Brigades, Sultan Murad and Battalion 16.

“Coordination between the two operating rooms is lacking, and factions within Ansar al-Sharia cooperate with Fatah Halab on an individual level mostly, with Jabhat al-Nusra playing a marginal role,” Col. Hassan Hamadeh from Brigade 101 told Al-Monitor.

While relations between opposing rebel groups are often wanting, recent Russian strikes have somewhat improved cooperation in certain cases between rival groups within the opposition.

Russian strikes and regime forces are currently focusing on the southern countryside, with the brunt of the battle taking place from Jabal Azzan to the city’s southern outskirts, according to Ahmad.

“The fighters’ spirits remain high despite the Russian onslaught, as rebels have been able to resist and cause losses among regime forces. Russian strikes are thankfully far from being precise, which is to our advantage,” Okaidi said.

In addition, rebels in that region said they had received new supplies of US-made anti-tank missiles from states opposed to President Assad since the start of the offensive last week. Rebels from three groups including the Sultan Murad group fighting in the Aleppo area told Reuters about the delivery of the US-made TOW missiles, adding they were now well stocked. TOW missiles are the most potent weapons against regime tanks.

According to Ahmad, the southern front remains the region’s weakest link, as it has a lower military presence of opposition groups. The region’s town of Al-Eis also bears strategic importance. “It is located on the supply route between Hama and Aleppo and overlooks the Aleppo-Damascus road,” said Hamadeh.

Russian strikes are not only facilitating regime advances on the southern front as rebels are also staving off Islamic State (IS) gains on their northern flank. A recent report by the Institute for the Study of War highlighted that the terror organization was benefiting from Russia’s strikes on the Syrian opposition. Oct. 9 witnessed the largest advance since August 2015 by IS against rebels in northeastern Syria. “The Syrian regime and IS have historically leveraged one another’s offensives in order to advance against rebel forces in the northern Aleppo countryside. Both IS and the regime will likely capitalize on the effects of Russian airstrikes on rebels,” according to the report.

Early this week, the regime had advanced even farther north to capture a sprawling cement plant from IS. Regime forces are clenching a closing fist around Aleppo city, with the newly captured villages and other facilities in the northeastern Aleppo countryside part of an apparent drive northwest.

According to Hamadeh, this area would be the next target of the regime, which is attempting to link Aleppo to the pro-regime Shiite villages of Nubl and al-Zahra in the Aleppo countryside that have been encircled by rebels for three years now.

For now, the conquest of the northern capital appears to remain on the back burner, as Aleppo sources believe that the battle for Aleppo is far from easy due to the size of the city, the remaining large civilian population and the multitude of players.

"The city is surrounded by rebel Jabhat al-Nusra in the west and IS in the east. The city is also located only 50 kilometers [31 miles] from Turkey, from which rebels receive substantial logistical support. One can hardly imagine that the Syrian army can retake Aleppo completely without control of the Turkish-Syrian border,” Balanche said.