Aleppo once again in the eye of the storm

It is total chaos in Aleppo where the regime and the opposition are fighting to reign supreme. 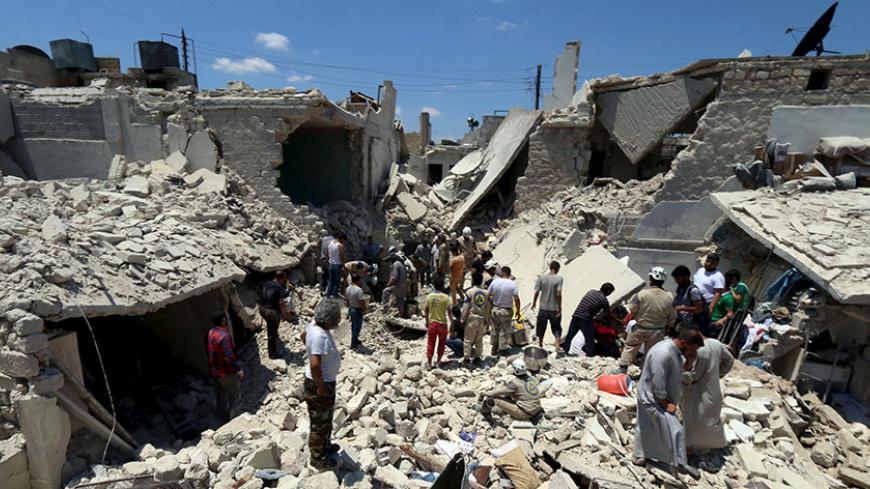 Civil defense members and civilians search for survivors under the rubble of a site hit by what activists said were barrel bombs dropped by the forces of Syria's President Bashar al-Assad in Aleppo, June 21, 2015. - REUTERS/Abdalrhman Ismail

ALEPPO, Syria — Since July 2, when Fatah Halab (Conquest of Aleppo), formed by the majority of opposition factions in Aleppo, announced the launch of its operations to take full control over the city, Aleppo’s residents have spent their nights listening to the sounds of cannons and planes.

Aleppo has been divided into two parts since the Free Syrian Army arrived in July 2012. The eastern side is under the opposition’s control, and the western side is under the regime’s control. The eastern side includes the richest neighborhoods in Aleppo and government institutions such as the municipal palace, the University of Aleppo and security services. In addition, this part of the city includes military sectors such as the artillery faculty, the Muhallab and Hanano barracks, the military academy and the artillery battalion in the al-Zahra neighborhood.

Opposition fighters often launch their operations at night in order to limit the regime’s use of the air force in such battles. The fiery artillery shells fly through the sky while the city shakes as a result of the surface-to-surface missiles launched by the regime’s forces, or what locals call “elephant missiles” because of the rumbling noise they make when launched.

On July 3, the opposition took control of the Syrian regime-affiliated Scientific Studies and Research Center in the al-Rashideen neighborhood. Weapons are made and developed in this center, and it is considered an impenetrable barrier and an important position to defend the western parts of Aleppo, which the regime controls.

Al-Monitor visited the center after the opposition took control of it. The fierce battles that have taken place there for the past years were evident. The majority of its buildings were corroded as a result of the clashes, while sturdy barricades and bunkers were put up to protect the center.

“We have taken full control over this center,” Hassan Maayaka, one of the field commanders in the Nur al-Din Zanki movement, an opposition faction that joined Conquest of Aleppo, told Al-Monitor.

The regime-controlled New Aleppo neighborhood is less than 1 kilometer (0.62 miles) away from the center toward the east. “This center will be a start for us to liberate the city of Aleppo. Soon we will be there,” said Maayaka while pointing to New Aleppo’s buildings.

Al-Monitor passed through some of the center’s halls and found empty rocket cylinders intended to be used as barrel bombs, which confirms that the regime forces were manufacturing weapons in the center and explains their fight to regain control over it.

“The regime realizes the magnitude of its loss, and on July 4, it launched a violent attack that lasted for nine hours, supported by military aviation and short-range missiles, for the purpose of regaining the research center, but we were able to resist,” said Maayaka.

In addition, on July 7, the regime is reported to have attacked the opposition forces in the center with chlorine gas, simultaneously as it launched a fierce ground attack, but it failed to regain what it had lost. The Soukhour al-Jabal Brigades, member of the Conquest of Aleppo, destroyed three of the regime’s tanks with the US-made Tao missiles during the same attack.

Conquest of Aleppo is not the only entity attacking the regime in Aleppo. Despite being the largest opposition force in Aleppo, including 34 factions — most notably al-Sham Front, the Army of the Mujahedeen and the movement of Nur al-Din Zanki (which are the biggest factions) — other factions refused to join Conquest of Aleppo. On July 2, they formed Ansar al-Sharia, which is made up of 13 factions, mostly from battalions affiliated to jihadist Salafist movements such as Jabhat al-Nusra and Jabhat Ansar al-Din.

The reason behind the division between Conquest of Aleppo and Ansar al-Sharia is not quite clear, but disagreements over the way to manage Aleppo might be one of the main reasons. “We want a civil management for Aleppo after we liberate it, under the supervision of the Shura Council,” Conquest of Aleppo Operations Room commander Maj. Yasser Abd al-Rahim told Al-Monitor.

The charter of honor for Conquest of Aleppo stipulates “refraining from attacking civilians regardless of their religions, and preventing the establishment of military headquarters inside [Aleppo].” Meanwhile, Ansar al-Sharia did not explicitly specify how it was planning to manage the city after controlling it, but only noted in its formation statement June 2 on Twitter that, “[w]e and other factions seek to establish a common charter to manage Aleppo after liberating it, according to the provisions of the true Sharia.”

Nonetheless, both Conquest of Aleppo and Ansar al-Sharia are allying to attack the regime. Fighters from both groups launched a joint attack July 2 on the Jamiat al-Zahra neighborhood (western Aleppo), a regime-controlled area, during which the opposition forces were able to advance toward the artillery battalion. The battle ended on the same day when the regime trapped a number of opposition fighters in a building and blew it up, resulting in about 10 deaths and the capture of seven others.

However, the battles in Aleppo did not end there. On July 6, the opposition attacked the regime forces in the Jamiat al-Zahra neighborhood, which indicates that the battles won’t stop in the next few days amid the opposition’s attempts to control Aleppo in its entirety. However, this will not be easy, especially in light of it being preoccupied in fighting the Islamic State in Aleppo’s northern countryside. In addition, the regime is unlikely to easily give Aleppo up, because Aleppo is considered the economic capital and most populated city in Syria.