The Syrian regime forces are attempting to gain ground in Aleppo’s outskirts to fend off any threat the opposition could pose on Aleppo city. 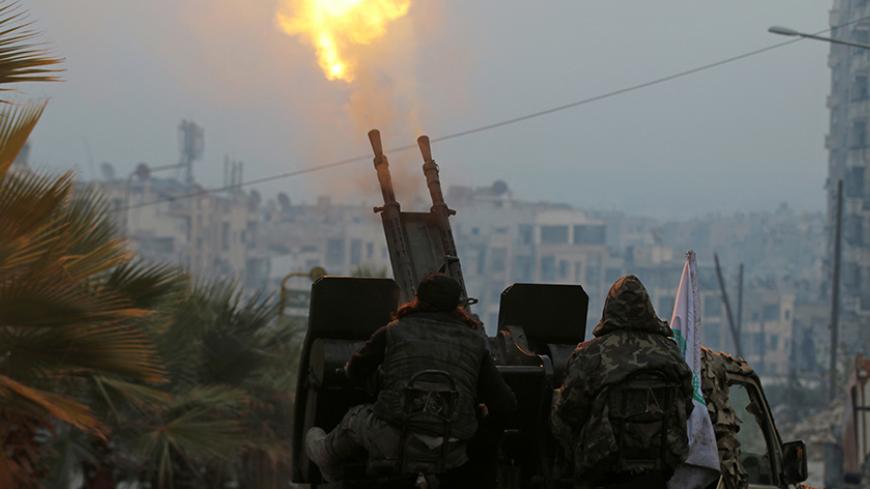 ALEPPO, Syria — In a bid to make progress on the ground in the outskirts of Aleppo city that are controlled by the armed opposition, the Syrian regime has been mobilizing additional troops to the suburbs’ fronts since early April.

The regime launched several ground attacks backed by airstrikes by the regime's air force and Russia on towns and cities controlled by the opposition that are near the fighting lines in the north and west of Aleppo. The shelling caused civilian casualties and injuries, and on April 18, a family of five was killed in the town of Urum al-Kubra, where the civil defense forces worked around the clock to rescue those trapped under the rubble as the shelling destroyed many houses.

The regime’s military escalation comes several months after it gained full control of the city of Aleppo following the opposition's loss of the eastern neighborhoods, which the rebels had seized in mid-2012. The loss came as part of a massive military operation launched on Sept. 22 by the regime on the eastern part of the city, which ended with an agreement between the regime and the opposition under the auspices of Russia and Turkey, stipulating the opposition's evacuation of the eastern part of Aleppo. The regime was in full control of Aleppo on Dec. 22, the day the last group of opposition fighters left the city for the Aleppo and Idlib countrysides.

Ahmed Osama Tenzry, spokesman for the armed opposition’s Huriya Brigades, told Al-Monitor, “The regime is seriously considering imposing its control over the northern and western Aleppo outskirts that pose a threat to its existence in the city. It is therefore primarily seeking to fend off the threat posed by revolutionaries to the city. Through its advance, the regime can deprive the rebels of any chance to attempt to launch an attack and enter the city of Aleppo again.”

He said, “The regime forces are now primarily working on disconnecting the rebel-controlled areas in the suburbs of Aleppo as they focus their attacks on the northern suburbs — the regime’s weak flank — where rebels can pose a threat to the regime positions inside Aleppo and in its northern countryside.”

Tanzari added, “The area controlled by rebels in the northern suburbs of Aleppo contains cities and towns such as Haritan, Anadan, Hayyan, Bayanoun, Kafr Hamrah, Asia, Layramoun, al-Mallah and Nasibayn; this area is closed off except to the west."

These cities and towns are only inhabited by a small number of civilians due to the constant shelling. The towns of Anadan, Haritan and Kafr Hamrah are large compared with other towns. In general, however, only 30% of the population of these towns remain there while the other residents have been displaced either to Turkey or to the countryside of Idlib over the last three years.

Tanzari noted, “The regime forces are working on besieging this area from the west in a bid to close off the area through two axes. The first axis is the regime bases in the towns of al-Nebel and al-Zahraa in the northern countryside of Aleppo toward the south, all the way through west Anadan, Kherbet Anadan and al-Tamura. The second axis starts from the northwestern angle of Aleppo in Jamiat al-Zahra and goes toward the north. The two axes should meet in the towns of Kafr Basin and Yakked al-Adas, through Maarat al-Artiq and the surrounding hills and the town of Babis and the nearby hills.”

He added, “The regime policy to besiege rebel areas allows it to focus on each area separately and target it with brutal bombardments of various types of artillery and missile shells as well as air bombardments. This will drain rebels and civilians in the area under siege and leave them with no other option but to flee.”

Capt. Amin Malhis, the commander of al-Rashideen operations room of the armed opposition in western Aleppo, told Al-Monitor, “Despite their repeated attacks, the regime forces have been trying in vain to advance since early April in the northern and western suburbs to break the rebel defense line. The latest attacks of the regime forces occurred on April 17-19, and the battles were concentrated in the axes of the Family House area, the Military Research Center, Shuwaihna, Jabal Adnan, Jazeera and al-Rashideen in the northwestern suburbs. The rebels responded to the attacks and inflicted heavy losses in the ranks of the regime forces.”

The opposition said it killed 15 members of the regime and a general in the Syrian Republican Guard during the ongoing fighting. At dawn on April 22, the regime launched an attack on the opposition positions in the suburbs of northern and northwestern Aleppo, and there are ongoing attempts by the regime to advance on the northern and northwestern outskirts of Aleppo, where intermittent fighting is taking place. Meanwhile, air raids are carried out on opposition sites and opposition-controlled cities and towns in the suburbs and have pushed more than 500 civilians to flee the town of Kabtan al-Jabal as new regime military reinforcements reached the fronts of the outskirts of Aleppo.

Malhis said, “The attack was preceded by more than 100 airstrikes carried out by Russian fighter jets against rebel positions in the northern and western suburbs of Aleppo, and the raids targeted more than 20 towns and areas controlled by the rebels. The regime forces preceded their ground attacks with artillery shelling. The attacks started in al-Zahraa, Shuwaihna, Jabal Adnan, Sheikh Aqeel and Khirbet Adnan. However, the regime failed to make any progress because of the rebels' response to the attack and their destruction of a T-72 tank.”

The city of Derat Azza saw the lion’s share of the airstrikes. On April 22, it was targeted by 15 raids carried out by Russian fighter jets within an hour, killing three civilians and wounding several others.

The rebels have remained steadfast in their determination to defend their fronts, asserting that they are capable of responding to the regime's attacks.

Malhis noted, “The regime will have to fight an uphill battle in the suburbs of Aleppo, where many factors hinder its progress. Chief among these is the fact that the rebel-controlled areas in the suburbs are rugged mountains that provide the necessary protection for the rebel fighters.”

The military operation carried out by the regime in the suburbs of Aleppo comes at a time when the northern Hama countryside is witnessing fierce battles. The Syrian regime is trying to take advantage of the battles raging in the Hama countryside in a bid to achieve some gains in the suburbs of Aleppo and try to destabilize and disperse the opposition by opening several fronts.