Aleppo residents displaced in their own country 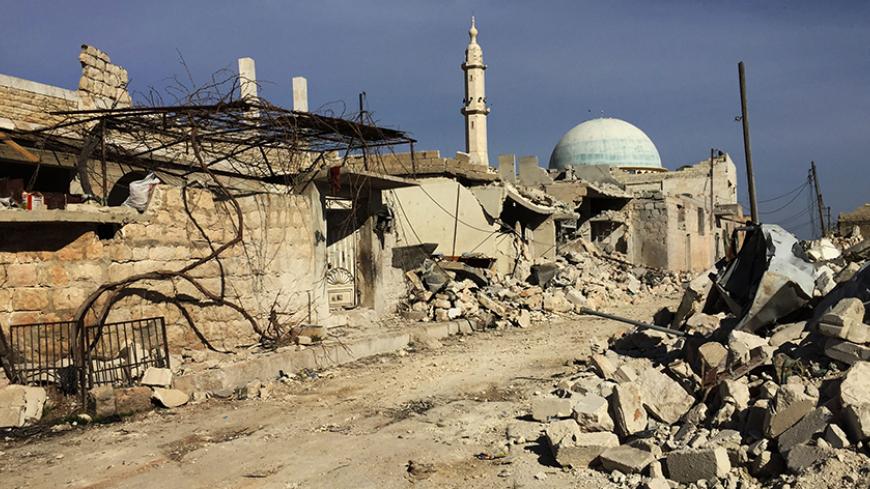 ALEPPO, Syria — The city of Anadan in the northern Aleppo countryside seemed empty when Al-Monitor visited Feb. 17 — with the exception of some citizens who returned to inspect their houses and a few fighters of the Free Syrian Army (FSA) who stayed to defend their land.

The Russian raids and regime forces’ offensives against Aleppo Feb. 1 forced hundreds of thousands of the residents in the northern Aleppo countryside to flee, as the regime forces took control of about a dozen towns, which cut the opposition’s strategic supply line connecting the Bab al-Salameh border crossing to Aleppo.

No one was in the streets. The rubble of destroyed houses caused by Russian airstrikes was found in all directions. It was similar to a ghost town, where only a whistling wind is heard through doors and windows.

Most of the shops in Anadan city square, which is a main shopping center, were burned and blackened because of the bombardment. This place used to be crowded with shoppers from different towns. Now the only things that remain are distress and sadness for the people who fled.

While roaming the city, Al-Monitor spoke to Abu Mahmoud, 60, in front of his house, which was partly destroyed by the shelling. Elderly citizens here are usually very attached to the land, to the point where they are unable to leave no matter how bad the circumstances are.

Abu Mahmoud's family fled to the western Aleppo countryside. He returns to inspect his house in Anadan whenever he has the opportunity. He told Al-Monitor, "All of the city residents have fled except for the young fighters.”

Since the Syrian revolution erupted in 2011, Syrians have become accustomed to casualties on a daily basis. As soon as the civil defense teams are dispatched following the shelling, life resumes its normal course. Abu Mahmoud said, “The situation is different today. A squadron of Russian aircraft conducts several raids on one town and uses cluster bombs. This is terrifying.”

He added, “What made us flee the city is the fear of the arrival of the regime forces.”

The situation in Anadan is similar to that of most of the towns and cities in the northern Aleppo countryside. The residents have fled Haritan, Kafr Hamrah, Hayan and many other towns that have been under heavy Russian bombardment in conjunction with the regime forces’ offensives on Aleppo.

In February, regime forces backed by Shiite militias made a major advancement against the FSA in the northern Aleppo countryside and took control over a dozen towns whose inhabitants fled.

There are two destinations for the displaced. First is the Syrian-Turkish border in northern Aleppo. Second is the opposition-controlled areas in the western Aleppo countryside and Idlib province.

Al-Monitor left the city of Anadan and headed to the western Aleppo countryside, where we spoke with Ahmed Qattan, an official at the local Bonyan relief organization.

On the way to the newly established camp near the town of Batbo, Qattan said that there are 60,000 registered displaced persons who fled to the western Aleppo countryside and Idlib. Some have found shelter in abandoned houses, while others who were less fortunate set up temporary camps, he added.

Qattan estimated the total number of displaced from the northern Aleppo countryside since Feb. 1 at about 200,000 people — most headed to areas adjacent to the Syrian-Turkish border such as Bab al-Salameh, Khirbet al-Joz and Salqin.

The situation was tragic in the camp near Batbo, where the most basic life essentials were unavailable. There were no bathrooms, water tanks or electricity. Moreover, the displaced did not have anything on their backs when they first arrived. “Our only concern was to save our lives,” a refugee told Al-Monitor.

Although the situation was bad in the camp — which was established on mud between olive trees — new families were arriving in succession, while the people already there were erecting additional tents to accommodate them.

Local associations and organizations seem unable to provide the displaced with the essentials. Qattan said they need “accommodation necessities,” such as tents, sponges and covers.

Azaz, which is located in the northern Aleppo countryside, has become separated from the rest of the opposition-controlled areas following the latest advance made by regime forces Feb. 3. Azaz thus turned into a confrontation arena between the FSA and the Syrian Democratic Forces (in which the Kurdish Democratic Union Party represents the largest force). In order to learn about the situation of the displaced on the Turkish border line, Al-Monitor spoke to Nazim Hafiz, the Bab al-Salameh border crossing director, via Skype.

On Feb. 4, thousands of displaced arrived successively to the Bab al-Salameh border crossing in order to enter Turkey following the advance of the regime forces, and Turkish Prime Minister Ahmet Davutoglu said on that same day that “10,000 new refugees are waiting at the border to enter Turkey because of the air raids on Aleppo.”

Yet Turkish authorities prevented their entry into its territory, according to Hafiz.

He said, “The crossing has turned into a shelter for displaced people, where a new camp was established.”

Turkish nongovernmental organization IHH has set up a camp at Bab al-Salameh border crossing, into which relief aid enters from the Turkish side of the border. But Hafiz noted, “There are large numbers of displaced, and the numbers are growing bigger daily — which the crossing cannot contain.”