Tens of thousands of Syrians displaced to northern Idlib by the latest Syrian regime offensives are in need of urgent assistance. 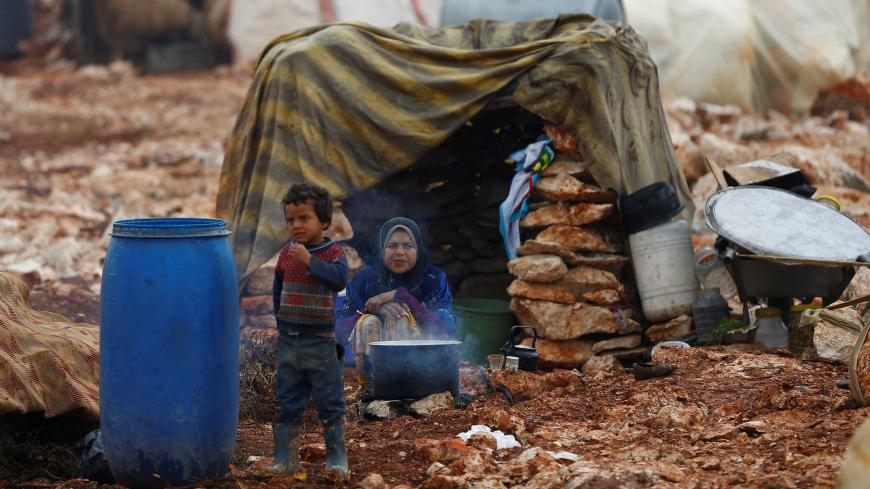 ALEPPO, Syria — The United Nations announced Jan. 16 that the escalation of violence in northwest Syria has led to the displacement of more than 200,000 people since mid-December. The United Nations Office for the Coordination of Humanitarian Affairs said in a report that it had recorded 212,140 instances of displacement between Dec. 15 and Jan. 16.

The early December escalation came in the wake of two months of sporadic fighting between the regime forces and the armed opposition in the northeastern countryside of Hama and the southern countryside of Aleppo, which are adjacent to the countryside of Idlib. These battles, coupled with intense raids and artillery shelling on the part of the regime and Russian aircraft, have led thousands of families to flee and empty the areas of conflict.

The ongoing military operation that the regime began on Oct. 24 targeted the Abu al-Duhur military air base in the southeastern countryside of Idlib and controlling opposition-held areas in the east of the Hejaz railway between Aleppo and Damascus. The Abu al-Duhur military base is the second largest military airport in the north of Syria. It was seized by the armed opposition on Sept. 8, 2015, and the regime is seeking to gain control of it because of its proximity to the Iranian military base in Jabal Azzan in the southern countryside of Aleppo.

Syrian government forces and their allies managed to penetrate the southern countryside of Idlib into the outskirts of Abu al-Duhur on Jan. 10, when they took control of the strategic village of Abu Dali and the subdistrict of Sinjar Nahiyah.

Yahya Rajo, who works for the Halab News Network, told Al-Monitor, “The UN report understates the number of displaced people, as more than 300,000 people have actually been displaced amid a tragic humanitarian situation. Hundreds of thousands of civilians are deprived of shelter and suffering in the cold. There are families that have nothing but a tent that does not protect them. The displaced are getting a limited humanitarian response, and many of them have not received any assistance.”

Mohammed Salim Toson, the Syria media coordinator of the IHH Humanitarian Relief Foundation, told Al-Monitor, “Tens of thousands of displaced flocked to northern Idlib near the Syrian-Turkish border within a short period of time. The foundation built a camp Dec. 15 near Bab al-Hawa border crossing in the area of ​​Kafr Lusein, north of Idlib. The camp, named Project 100, contains 120 tents accommodating about 120 families, in addition to four large tents accommodating 25 families each.”

He added, “IHH is about to finish building another camp in the village of Babsqa in the western countryside of Aleppo. This camp contains 300 tents and is equipped with drinking water, bathrooms and a drainage system.”

Toson explained that IHH provided relief baskets to about 1,000 families, containing food, basic household supplies, clothing, winter blankets and floor mats to be used in tents. Several medical clinics have also been established, according to Toson, in the border areas of northern Idlib to provide medical services to the displaced, but much more humanitarian support is needed.

Ahmed al-Ahmad, the Syria media coordinator of the Turkish Red Crescent, told Al-Monitor, “The wave of displacement started in early December 2017 and got more disastrous since the first day of 2018. The Red Crescent has established two camps to accommodate the displaced: the You Are Not Alone Camp, which can accommodate up to 5,000 people, and a second one that can accommodate up to 20,000 displaced people. The two camps are located near Bab al-Hawa in the north of Idlib. … We are planning on building more camps near the Syrian-Turkish border in northern Idlib to accommodate the vast number of displaced people, estimated by the Red Crescent at more than 300,000, mostly children and women.”

A 45-year-old displaced man from southern Idlib, who spoke to Al-Monitor on condition of anonymity, said, “We fled the town of Sinjar as planes were deliberately bombing houses to force residents out and facilitate the entry of regime forces into the town. I fled with my family of seven to the north of Idlib near the Bab al-Hawa crossing. We were lucky to get a tent, but we still have not gotten a heater. It is very cold and I have little kids to keep warm.”

As the bombing continues, the flow of displaced people is unlikely to slow.