The northern countryside of Aleppo has been emptied as thousands fled to surrounding areas following the intensification of the Islamic State attacks in August. 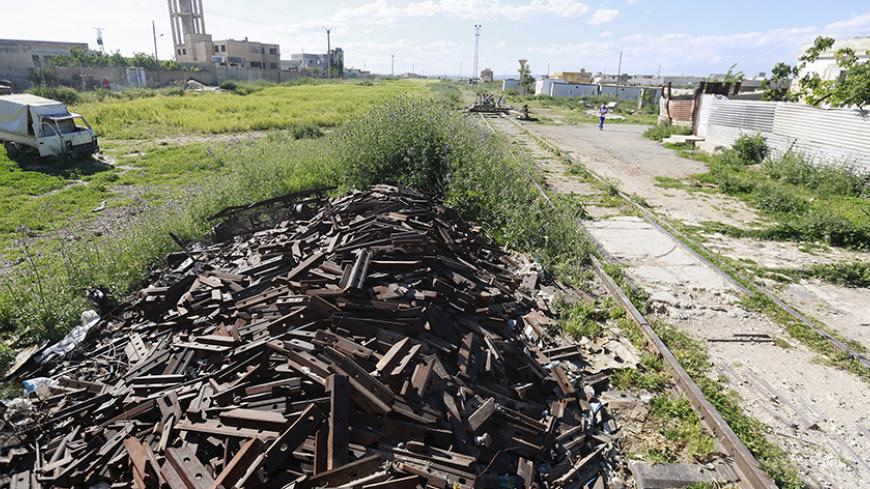 Railway tracks at the Tell i-Refat train station are pictured in the northern countryside of Aleppo, May 6, 2015. - REUTERS/Hamid Khatib

ALEPPO, Syria — Abu Sami sat in front of his tent in the periphery of Deir Jamal, in the countryside of northern Aleppo. His wrinkles and white hair at just 50 years old told a tale of suffering.

He warmly greeted us and insisted that we drink the tea he prepared over charcoal. “I am very pleased that there is someone who cares about us,” Abu Sami said before he started telling Al-Monitor about the long hassles of displacement.

Abu Sami, a pseudonym, is one of the thousands displaced in August from the towns of northern Aleppo near the line of contact between the opposition forces and the Islamic State (IS). This front extends over 40 kilometers (25 miles) from the Syrian-Turkish border to the edge of the industrial city of Sheikh Najjar.

Hawar Killis, Tlalin, Kafra, Marea, Umm Hawsh, Herbel and dozens of other towns and villages in the northern Aleppo countryside have been emptied of their populations by IS attacks ongoing since Aug. 9.

“We barely managed to escape with our lives when IS attacked in the middle of the night,” said Abu Sami. “Shells fell like rain. We rushed to put on our clothes and we fled the town amid clashes.”

During the month of August, IS was able to seize control of five towns and villages from Syrian opposition fighters in the northern countryside of Aleppo, including the village of Tlalin, from which Abu Sami was displaced after a violent attack on Aug. 14.

IS' car bombs, mortar shells and toxic gases prompted the population to flee, Abu Sami said. “Most of the residents of my village had fled earlier because of the falling shells and the sudden eruption of battles, but I stayed until the recent IS attack, which ended with the organization taking control over my village,” he explained.

Near Abu Sami’s tent there were dozens of scattered others, all newly erected as temporary shelters following IS attacks on the northern countryside of Aleppo. The displaced had no other option, as the Turkish authorities have kept the border with Syria closed since March 9.

“What do we need? We need blankets, clean water and supplies,” Abu Sami answered. “We came out of our homes without being able to bring anything with us. All I wanted was to rescue my children and wife.”

Others were luckier and found homes in the towns of the northern and western Aleppo countryside, distant from the battles. Many houses in towns such as Anadan, Kafr Hamrah and Darat Izza were abandoned when their residents fled the bombing. These homeowners are cooperating with the local councils to open their houses to the displaced as a temporary solution.

Al-Monitor met another displaced man in Hreitan as he transferred furniture to a house the opposition's local council assigned him.

“Thank God, there are still good people in this world,” he told Al-Monitor in the local Arabic dialect. “I fled to this house with my family and my brother's family after the intensification of the fighting in the city. It was no longer possible to live in Marea.”

On Sept. 1, the opposition-affiliated Free Aleppo Governorate Council declared the northern countryside of Aleppo “a disaster area” and called on the Friends of the Syrian People and other relief organizations to provide the necessary support to contain the crisis.

The general coordinator of the Aleppo Humanitarian Emergency Room, Hossam el-Din Fa’el, explained that about 3,000 families have been displaced from the northern countryside of Aleppo and that almost half of them have taken refuge in camps in the Turkish border region, while the other half went to the northern and western Aleppo countryside.

Fa'el's group, a coordination network set up in June between local and international relief organizations that includes 26 organizations, is responding to urgent humanitarian cases.

Fa’el told Al-Monitor, “The displaced people in the countryside of Aleppo mainly ask for basic materials for their shelters. These include mattresses, blankets and household items.” He pointed out a severe lack of “sponges and cleaning materials.”

IS’ ongoing attacks in Aleppo’s countryside are displacing ever more civilians, whose lives have become a living hell in the absence of relief aid inside the country and in light of Turkey’s continued border closure.