IS advances in northern Aleppo

The towns and villages of northern Aleppo’s countryside have been witnessing heavy clashes between the Islamic State and rebel factions, while Syrian regime aircraft have bombed several sites, thus suggesting cooperation between the regime and IS. 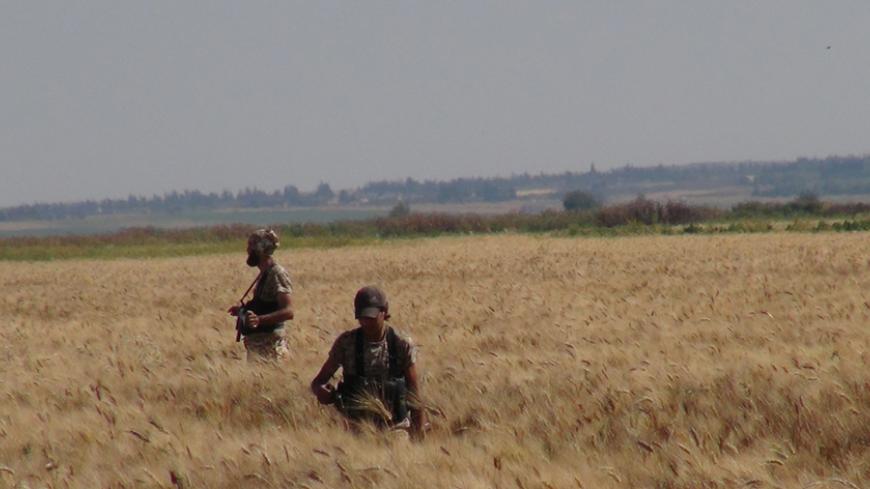 Opposition fighters at the front lines with IS on the outskirts of Marea in the northern countryside of Aleppo, May 6, 2015 - Mohammed al-Khatieb

ALEPPO, Syria — The population of the rebel-controlled northern countryside of Aleppo is taking the brunt of Bashar al-Assad’s airstrikes and the Islamic State’s (IS) mortar shells. Al-Jabha al-Shamiya (Shamiya Front), the largest faction in northern Aleppo, is facing a major challenge.

IS has been waging the heaviest attacks on the region since May 31, in an attempt to seize the rebel-controlled towns. Meanwhile, the regime warplanes and helicopters are carrying out unprecedented strikes on the northern towns of Marea, Tall Rifaat and Herbel.

IS’ attack on Aleppo’s northern countryside had been anticipated following the group’s car bomb attacks on April 7 against centers of al-Jabha al-Shamiya, which led to the killing of one of the front’s leaders and 31 other members.

Al-Monitor visited the northern countryside of Aleppo on May 31, where clashes were breaking out between IS and various rebel battalions. During the week Al-Monitor spent in northern Aleppo, the regime aircraft carried out raids on rebel-controlled towns, as sporadic shells fired by IS set agricultural crops alight. At sunset, clashes would erupt as IS tried to infiltrate the rebels' main centers and advance under the cover of darkness. 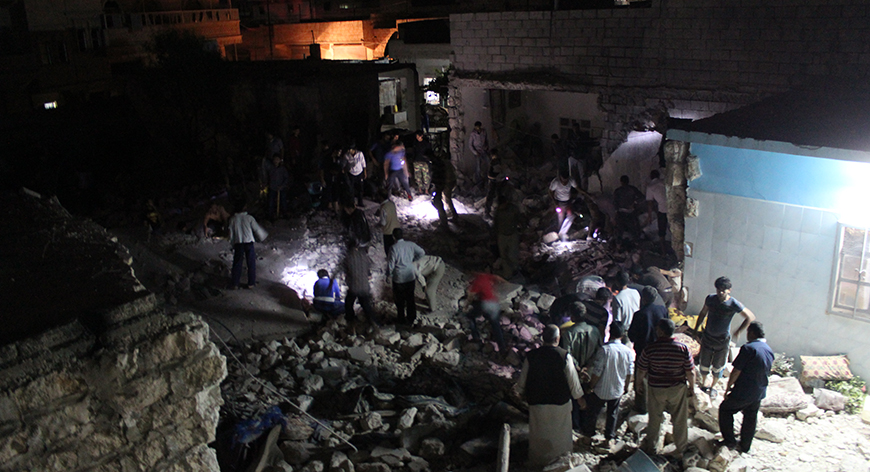 A regime air raid on the city of Marea in the northern countryside of Aleppo killed six people, May 31, 2015 (photo by Mohammed al-Khatieb)

In Marea, one of the largest strongholds of al-Jabha al-Shamiya in Aleppo, life is quasi-normal, even though the city is at the front line in the battlefront with IS. While some families have fled the city because of the fighting, it seems that residents are confident in the rebels’ ability to prevent IS from invading their city.

Many rebel battalions send military reinforcements throughout the day from the western countryside of Aleppo and Idlib to Aleppo's northern countryside. These reinforcements are distributed along the front line with IS, from the Turkish border to the outskirts of the industrial city of Sheikh Najjar in Aleppo governorate.

Although these reinforcements managed to stop IS' progress, they have thus far failed to restore IS-controlled towns; IS is still on the offensive despite all of the incurred losses. Most of the violent clashes between the rebels and IS took place on June 5 in the village of al-Sheikh Rih near the Turkish border.

The same day, Ahrar al-Sham, one of the rebel factions in Syria, announced that 30 IS members were killed during the clashes in al-Sheikh Rih, while two IS tanks and a Hummer were destroyed.

At the points of contact between the rebels and IS, rebel fighters are stationed at military points within agricultural fields. Al-Monitor interviewed Col. Abu Ahmad, who refused to reveal his full name. He is a field commander in the brigade rally called “Therefore stand firm as thou art commanded.” Abu Ahmad told Al-Monitor, “We will not allow IS to achieve further progress in the northern countryside of Aleppo. The battle has become crucial for us.” Because of IS’ progress, the rebels are at risk of losing the Bab al-Salameh border gates with Turkey, which is a lifeline for the rebels.

During the meeting with Abu Ahmad, the regime forces' helicopters were hovering in the sky before they dropped explosive barrels on the village of Ihras, 16 kilometers (10 miles) north of the city of Aleppo. Abu Ahmad said, “The regime forces’ advance to support the terrorist IS organization in this battle aims at weakening the rebels and delaying the battle for the liberation of Aleppo.”

The regime raids on the northern countryside of Aleppo are unusual for areas outside its control; they are intensified raids on the villages of Aleppo’s northern countryside and towns and they coincide with IS attacks. On June 4, regime aircraft bombed eight towns and cities that are either located at the contact line between the rebels and IS or form a supply road for the rebels.

On May 3, several opposition factions called for the “Conquest of Aleppo” operation, to control the entire city of Aleppo, while half of its neighboring cities are still controlled by the regime.

In light of IS’ attack on the northern countryside of Aleppo, rebels will seemingly fail to engage the regime in a battle in Aleppo. In this context, Col. Mohammed al-Ahmed, a spokesman for al-Jabha al-Shamiya, told Al-Monitor, “IS’ attack on Aleppo’s countryside will definitely delay the 'Conquest of Aleppo' battle, but the battle with the regime is well prepared, and even if it is delayed, it is bound to happen.”

IS’ continuous attempts to progress toward the towns in the northern countryside suggest that the organization has not achieved its goal yet, which includes controlling the town of Soran and nearby villages. IS fighters swear they will take revenge on the rebels in the cities of Marea and Tall Rifaat, from both of which they were expelled in March 2014 when they were attacked by rebel factions.