IS attacks force thousands to flee from Aleppo

Makeshift camps near the Turkish border for displaced Syrians are overwhelmed following the Syrian government's barrel bombing campaign in Aleppo and the Islamic State's attacks in the northern Aleppo countryside. 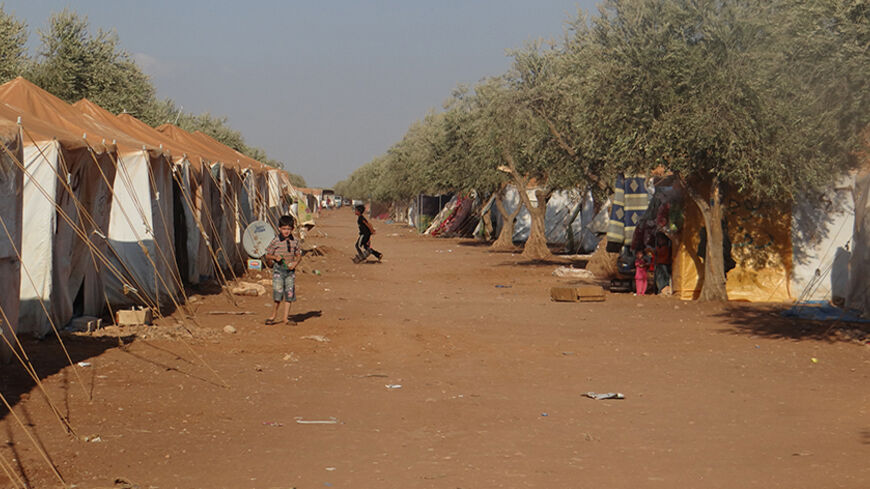 A child next to a tent in Akdeh refugee camp near the Turkish border with Syria, Sept. 7, 2014. - Mohammed al-Khatieb

ALEPPO, Syria — Abu Ahmed, 40, works long hours transferring goods from trucks at the Bab al-Salameh border crossing between Turkey and Syria to provide for his wife and children. Four months ago, Abu Ahmed lived in the Halak neighborhood in the city of Aleppo, but then government helicopters barrel bombed the house he used for shelter. He fled with his surviving family members to Bab al-Salameh, in the northern Aleppo countryside.

Abu Ahmed rubbed dust from his eyes while standing in front of his tent, which swayed in the wind. He lamented, “This is the third time I have moved, and I do not think it is going to be the last. I feel that I am destined to be in misery all my life. No electricity, no food, no life worthy of a human being.” He also told Al-Monitor, “On a monthly basis, my children get diarrhea and stomach illnesses. And I don’t have a choice but to have my little boy work in a restaurant to be able to get a meal at the end of the day. Life has become very difficult here.”

Charities used to provide two meals a day to every person in the camp, in addition to a food basket every 15 days. The large influx of displaced persons, however, forced the camp's management to reduce food rations and distribute only one meal and one loaf of bread per day.

The camp is designed to accommodate 5,000 people, but the latest official statistics, of which Al-Monitor obtained a copy, indicate that at the beginning of September some 16,850 people, most of them children, lived in the camp.

During the past few months, the city of Aleppo and its suburbs have witnessed a large wave of displacement because of the Bashar al-Assad regime's barrel bombing campaign. Added to these are recent Islamic State (IS) attacks on the towns in the countryside of Aleppo.

IS launched a battle in mid-August aimed at controlling the northern countryside, the stronghold of the opposition in Aleppo. Indeed, IS fighters took control of some 13 towns, including Akhtarin, but rebel forces were able to halt their advance when they reached the outskirts of the strategic town of Marea. A cautious calm currently prevails in the region.

The director of the Bab al-Salameh camp, Mohammed Kilani, spoke to Al-Monitor about the strains the latest influx of the IS attacks have had on the camp. “We announced four months ago our inability to receive any new families, but we had to take in more than 100 families from the countryside of Akhtarin and Marea as a result of recent events and the Islamic State’s attack on the region.”

Kilani stated, “Many of the organizations that were providing services to the camp stopped their support, with the exception of IHH [Turkish Humanitarian Relief Foundation], which provides meals, and Medical Relief for Syria, which provides health services.” He also said, "There is a severe lack of bread, food and drinking water, in addition to the packed bathrooms and the lack of a covered sewerage system. This allows diseases to spread in the camp, as the sewerage network is open and runs among the tents.”

Camps for the displaced are scattered along the border area between Turkey and the territory controlled by the opposition in Aleppo. Many of them are newly established, while others are yet to be finished. Al-Monitor visited seven camps near the Turkish border in Azaz alone.

These shelters are usually established close to the border to reduce the likelihood of being exposed to bombings and warplanes. This did not, however, shield the Bab al-Salameh camp in June 2013 from airstrikes by the regime. The camp was also targeted by other bombings, and a car bomb near the camp in May claimed the lives of 50 people.

Al-Monitor visited a recently established camp among olive trees near the Turkish border. Dust covered the hastily erected tents, and there was no water network, no electricity, no lighting. A tent, pads on which to sleep and some food baskets were all the displaced were provided with.

The camp — called Akdeh by the refugees because of its proximity to the town of Akdeh — was established in June after intensified aerial bombing of towns in the countryside prompted residents to flee. A large proportion of the camp's current population, however, were displaced from towns that IS took control of in its latest attacks on the northern countryside of Aleppo. Some of them hail from towns that witnessed clashes between IS and other rebels.

Ali Najjar, the director of the Akdeh camp, lives in one of the tents. He told Al-Monitor, “The camp currently has 3,000 people. There are 550 tents, and no relief organization has thus far provided ongoing support for the displaced here. Sometimes we even fail to secure drinking water for them.”

On the outskirts of the camp, a mother in her 40s and her daughter were trying to cook with bulgur. A group of children played soccer nearby, despite the thick dust being raised by the ball. The mother either hid her annoyance or maybe she was indifferent. The girl asked, “How long are we staying here, Mom?” Her mother replied, “God only knows, my dear.”