Displaced Syrians living in refugee camps are dreading winter as they dig their tents out from under the recent flooding. 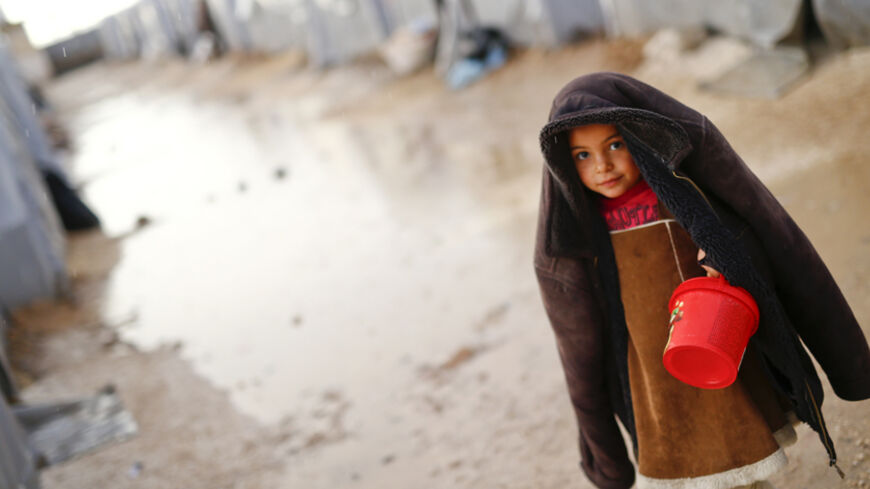 A Kurdish refugee child from the Syrian town of Kobani walks in the rain in a camp in the southeastern town of Suruc, Sanliurfa province, Oct. 16, 2014. - REUTERS/Kai Pfaffenbach

ALEPPO, Syria — Ismail used a shovel to dig a watercourse in the mud to keep the water from his tent in the Bab al-Salam refugee camp on the Syrian-Turkish border. But his efforts were in vain as his luggage sank into the ground inside the tent before he could take any of it out.

The heavy rains on Oct. 16 were unexpected. The first rainfall this winter left dozens of tents under water and mud before the displaced could prepare to save their belongings.

About 100 tents set up in a low area inside the camp were fully submerged. Some of those whose tents were set up on higher land got lucky and water only dripped through their tents.

Busy cleaning up his tent, Ismail told Al-Monitor: “Rain poured on us in the middle of the night. I did not know what to do with my children. I woke my wife up and took the kids out of the tent with some blankets and headed to the mosque nearby. ... If it weren’t for the help of neighbors, all of the furniture inside the tent would have been damaged.”

Ismail seemed confused, unsure whether to stay or leave the camp. However, as he cleaned, it seemed his only option was to stay. He asked, “Where should I go? Either I live in the mud and under the rain or take my children to live under the shelling of barrel bombs.”

This is the first winter that Ismail has spent in the camp, after a barrel bomb was dropped by the regime's air forces near his home in al-Marja district of Aleppo, forcing him into displacement to protect his family. Others are spending their third winter in the camp.

Abu Ahmed, another refugee, wandered around checking on the tents of his relatives. He could barely lift his feet, which would sink in the mud with every step. He told Al-Monitor: “This is the third winter season for me and my family here at the camp, and the situation is the same. Up to this day, they have failed to find a solution to the muddy ground. They should either asphalt it or lay gravel.”

He added, “This is unacceptable. It takes ages to go to the restroom. Is this a decent life for human beings?”

Bab al-Salam is one of the oldest refugee camps in Syria and hosts about 17,000 people, mostly children. Yet, the humanitarian situation in this camp is extremely dire.

Numerous tents were worn out and torn with time. The exposed sewage ducts passing between tents and flooding as the rain falls worsen the situation further, significantly contributing to the spread of diseases.

The camp director, Mohammed Kilani, took Al-Monitor on a tour of the camp. He said, “We have repeatedly appealed to relief associations and the Syrian interim government to pave the campground. But so far no one has responded to our calls.”

He added, “We suffer from a shortage of blankets and sheets, especially after the influx of hundreds of new families as a result of the barrel bombing of the city of Aleppo and the attacks by the Islamic State [IS] in the countryside. We have received some help, but it is not enough.”

Bab al-Salam is not the only such camp in northern Aleppo; there are seven others scattered along the border with Turkey. All suffer the same difficulties as winter approaches. It seems that the situation in Bab al-Salam is actually much better than that of other newly erected camps. The Akdeh and Shamareen camps lack the minimum of services, from drinking water to electricity, while all of them suffer from muddy ground.

Nevertheless, the displaced still flock to the camps. They were stranded by the continued bombardment from the Syrian regime’s air force and many of them fled their hometowns fearing the cruelty of IS, which seized control of the villages and towns north and east of Aleppo.

After many attempts to remove his knee-high boots, Ahmad, 11, decided to walk barefoot in the mud to bring water to his family's tent in Shamareen. As his mother cleaned his feet, she said she wishes President Bashar al-Assad evil, blaming him for displacing her from her home in Sakhour district in Aleppo.

“No one feels our pain,” she told Al-Monitor.