Did Khamenei blur his own red lines on sanctions? 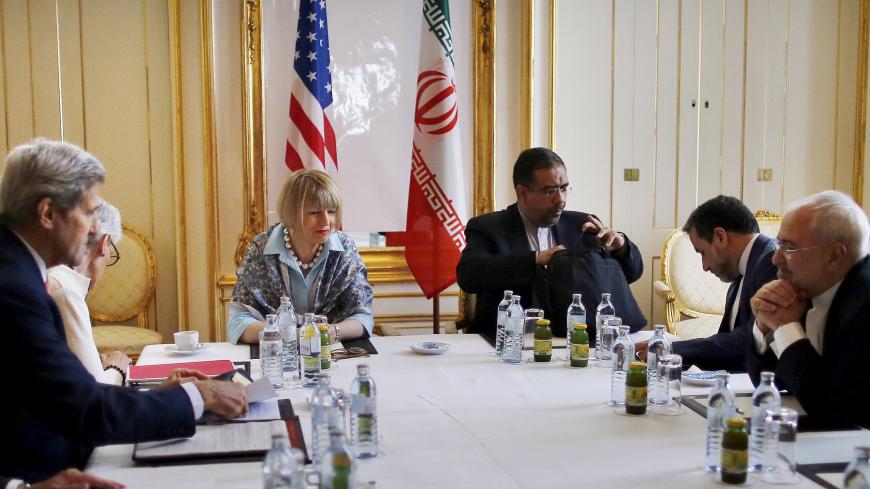 The timing and pace of the lifting of sanctions remains one of the most vexing issues as negotiators meeting in Vienna aim to conclude an agreement by the June 30 deadline. While US officials took note of Khamenei’s remarks, a US official said, “What always matters most to us is what happens inside the negotiating room and if Iran upholds its commitments … as it has,” as reported by Laura Rozen, who is covering the nuclear talks from Vienna.

Mohammad Ali Shabani writes that unless Khamenei’s remarks, which appeared to draw even stricter red lines for a deal, are put in context, “It's easy to misread what was said. In the same vein as his comments on Western penalties, Khamenei asserted that ‘the lifting of sanctions has different phases of implementation and we accept this,’ adding that 'implementation of the lifting of sanctions should be in line with the implementation of Iran’s agreed commitments.'”

Shabani also wrote, “Oddly, in this case, Khamenei’s own media office seems to have abetted the mainstream reading of his remarks. Khamenei has two websites: Leader.ir and Khamenei.ir. His crucial comment that ‘the lifting of sanctions has different phases of implementation and we accept this’ is omitted in both the English- and Persian-language transcripts of the speech on Leader.ir, while it's only available in Persian on Khamenei.ir. Al-Monitor was able to confirm this key remark after reviewing Persian-language video of the speech disseminated by Khamenei.ir.”

Shabani clarifies what may be Iran’s interpretation of a “start date” for an agreement: “Speaking to Al-Monitor on condition of anonymity, Iranian sources said nothing will be signed in Vienna, even if a deal is reached. They noted that the United States has its own domestic process for ratifying the deal, and that if it does, the P5+1 (the five permanent members of the UN Security Council plus Germany) and Iran can start implementing commitments. According to the sources, this process will take time. The reduction of the number of centrifuges, for example, can't be done in a matter of days. Moreover, as both sides begin taking measures, there will be a mechanism to ensure that on an agreed date, when the deal will be considered implemented, both sides will have lived up to their commitments. The Iranian sources said that Khamenei was referring to the date of implementation in his speech. They added that Iran still seeks UN Security Council issuing of a resolution endorsing the agreement.”

Khamenei made clear in his remarks his full support for those in the Iranian negotiating team, referring to them as “friends” and counseling critics within Iran that while the negotiators are not “infallible … we believe in their trustworthiness, their piety, their zeal and their courage.” Khamenei added, “If you were aware of the content and details of the negotiations and what happens there, then you would surely confirm part of what I am saying.”

Assad chooses his battles in Aleppo

Mohammed al-Khatieb reports this week from Aleppo that the Syrian government may be seeking to break rebel strongholds in northern Syria by leveraging Islamic State (IS) operations against Syrian rebel forces in those areas.

Khatieb observes that recent Syrian government airstrikes in the region have focused on territory controlled by Syrian opposition forces backed by the United States and its allies, while sparing those areas controlled by IS. There has at times been a muddled or confused understanding of the alleged relationship between Syrian President Bashar al-Assad and IS. In November 2014, US Secretary of State John Kerry had said, “The Assad regime and [IS] are actually dependent on one another. That’s why Assad has relentlessly bombed areas held by the moderate opposition while doing almost nothing to hinder [IS'] march.”

Khatieb’s analysis clarifies the alleged Assad-IS “dependency”: “Despite the fact that IS must be benefiting from these strikes, it cannot be said that Assad and IS are allies. The regime has fought IS before, incurring heavy losses in materiel and troops in August and September of 2014, when IS attacked the Tabaqa military airport and the Shaer oil field. What then drives Assad to help IS on the battlefield?

“There are two main reasons. The first is the region’s importance to the rebel forces. Aleppo’s northern countryside is considered to be one of the largest rebel strongholds with access to Turkey, as well as the rebels' only gateway to the city of Aleppo,” Khatieb writes.

Khatieb continues that international support for armed Syrian opposition groups also weighs in Assad’s calculations: “The second reason for the recent strikes against rebel areas is that the Assad regime faces two main foes in Syria: IS, against which the United States is leading an international coalition, and rebels backed by a variety of regional powers, most notably Turkey, Qatar and Saudi Arabia. In that context, it is only logical that the regime would prefer eliminating an enemy that receives backing, weapons and funds from regional sources, and leave the task of weakening its primary enemy, IS, to the international coalition. Consequently, the regime’s presumed elimination of Syrian rebels would force the international community and the factions that back those rebels into allying themselves with Assad to finish off IS.”

Whbee: Israel “next target” for terrorists

On June 22, a mob near the Druze village of Majd al-Shams attacked an ambulance carrying two wounded Syrian rebel fighters to an Israeli hospital, killing one, and further escalating questions about Israel’s role in Syria.

Ben Caspit writes that since the incident “Israel has intensified its information campaign among the Druze in an effort to convince them that Israel is neither collaborating with nor aiding Jabhat al-Nusra fighters. Nevertheless, many members of the Druze community are convinced that most of the wounded Syrians taken for treatment in Israel are actually members of Jabhat al-Nusra. On June 11, that same group allegedly committed a massacre of Druze in northern Syria, where the community lives along the border with Turkey.”

Former Israeli Deputy Foreign Minister Majallie Whbee, an Israeli Druze, told Mazal Mualem that while he believed that those Druze involved in the attack near Majd al-Shams had “some ties or other to the Syrian government,” Israel needs to be more alert to the threat from terrorist groups such as Jabhat al-Nusra and IS gaining ground in Syria.

“Israel’s leadership took time to wake up to the threat,” Whbee said. “At first, they were excited to see the Assad regime collapsing. They didn’t realize what would come to replace it. It is clear to me that Israel is the next target after Syria. Given that, what happened to the Yazidis and the Christians must not be allowed to happen to the Druze. Some people claim that the civil war in Syria will last years. In that case, Israel must take a deep breath and have its forces on the alert. If Bashar al-Assad falls in the near future, the IDF [Israel Defense Forces] must be ready for much more extensive defensive measures along the border.”

Ayah Aman reports, “Despite Turkey's new alliance with Saudi Arabia on Syria, with both supporting jihadist movements there, Cairo's diplomatic efforts appear geared toward countering or lessening Turkey’s active role in the conflict. At the same time, Egypt is taking steps toward rapprochement with Russia and is beginning to view Assad's regime as part of a potential solution.

“The opposition conference in Cairo — which hosted new factions and excluded the Ankara-backed National Coalition for Syrian Revolution and Opposition Forces — announced a new road map to resolve the crisis. The plan does not abolish Assad's government, but stipulates that the only way to save Syria is through a negotiated political solution between opposition delegations and the regime under the auspices of the United Nations.”