Cairo and its regional ally Riyadh have not been seeing eye to eye when it comes to the Syrian crisis and ways to resolve it, amid bitterness on the part of Syrian opposition factions that accuse Cairo of not strongly contributing to finding a solution to the crisis. 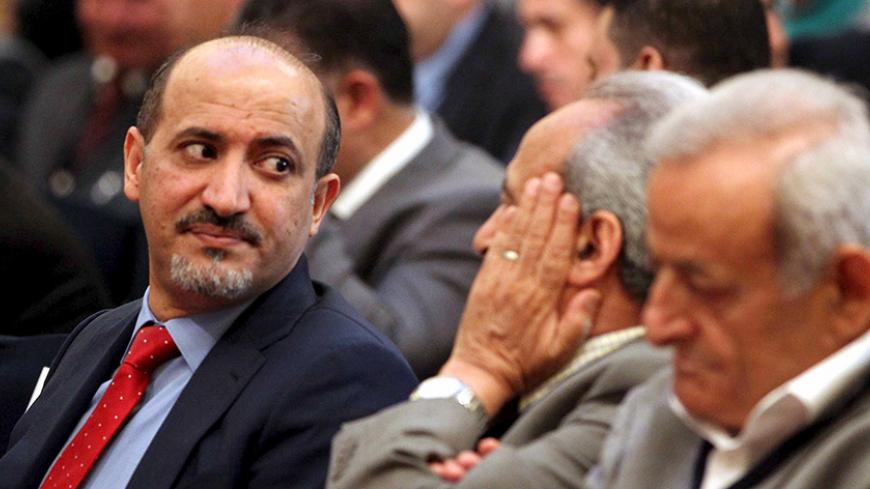 CAIRO — Following the June 8 conclusion of a conference of Syrian opposition forces in Cairo, it looks like Egypt might be adopting a new policy on the Syrian crisis, shifting a position formerly supportive of its strategic regional partner Saudi Arabia. The government is now rejecting a military solution and instead calling for a political resolution to the crisis that erupted with the Syrian revolution in 2011.

Cairo’s position has changed with each new regime over the last four years, beginning with the January 25 Revolution through the current administration of President Abdel Fattah al-Sisi. It remained diplomatically silent, declining any significant role, even through the Arab League, during the military's rule in 2011 and 2012 until Mohammed Morsi became president. Morsi, believing that ousting President Bashar al-Assad was a moral duty, severed diplomatic relations, thus turning Cairo into a safe haven for Syrian opposition forces. Things changed again, however, when Sisi took power, in June 2014, and sought out middle ground to avoid jeopardizing relations with international and regional actors, primarily Saudi Arabia and Russia, which have taken conflicting positions on Syria.

Despite Turkey's new alliance with Saudi Arabia on Syria, with both supporting jihadist movements there, Cairo's diplomatic efforts appear geared toward countering or lessening Turkey’s active role in the conflict. At the same time, Egypt is taking steps toward rapprochement with Russia and is beginning to view Assad's regime as part of a potential solution.

The opposition conference in Cairo — which hosted new factions and excluded the Ankara-backed National Coalition for Syrian Revolution and Opposition Forces — announced a new road map to resolve the crisis. The plan does not abolish Assad's government, but stipulates that the only way to save Syria is through a negotiated political solution between opposition delegations and the regime under the auspices of the United Nations.

“We faced great difficulties during the conference's organizational consultations in trying to convince the invited parties to agree on the road map,” said a diplomatic source at the Egyptian Foreign Ministry who participated in the June 8 meeting and requested anonymity. “The document was drafted amid an Egyptian effort not to attack any of the strong regional actors in the Syrian crisis, despite attempts on the part of some of those participating in the meetings to condemn Turkey, Hezbollah, Iran and Russia because of their military support to the parties involved.”

The source additionally stated, “Convincing the convening Syrian factions in Cairo to adopt the road map is a major diplomatic achievement, and there will be several steps aimed at building on that.” When asked to comment on the reaction to Cairo's move to create a new opposition bloc under its tutelage to the exclusion of the National Coalition, the source remarked, “There is a broad rejection of the coalition’s policies among the Syrians themselves, as it is not the only legitimate representative of the Syrian people.”

While Cairo has been relying on Saudi Arabia, deeming it a strategic ally since Sisi’s accession, Egyptian media have reported tensions between Cairo and Riyadh over Syrian crisis management stemming from the Saudi alliance with Turkey, including supporting the Muslim Brotherhood and jihadists in Syria to bring down Assad. Reports from the Gulf are predicting that even more differences to arise, especially given Cairo's decision to host Syrian opposition figures and formulate a road map before an anticipated gathering of the Syrian opposition in Riyadh, albeit at an undetermined date.

The diplomatic source said, “The situation cannot be described as a diplomatic dispute between Cairo and Riyadh, but rather as a difference in vision at the level of assessing the situation inside Syria. [Current relations] stem from a difference in understanding the impact of the deteriorating Syrian situation and the rise of armed jihadist groups in the two countries.”

Despite the two states' differences, some opposition figures involved in the Cairo meetings still hope that Cairo will be able to convince the Saudis to reconsider their support of such armed movements as Jabhat al-Nusra and Jaish al-Fatah.

“The outcome of the Cairo meetings on the Syrian opposition will garner international support, [especially with] Russian backing,” Habib Haddad, a former Syrian information minister and a participant in the Cairo meetings, told Al-Monitor. “The converging Saudi-Turkish-Qatari position regarding the management of the crisis in Syria reveals that Saudi Arabia does not want a democratic system in Syria, but rather its only aim is to protect itself, against Iranian control.”

Haddad further stated, “The Syrian opposition gathering in Cairo ensures the independence and representation of a wider opposition spectrum as well as freedom of decision, especially since Cairo has no hidden agenda, unlike Turkey and its serious role in supporting al-Nusra.”

Bilal Salahuddin, director of the Asbar Center for Studies, Research and Communications and a Syrian participant in the Cairo meetings, told Al-Monitor, “The Syrian opposition is not involved in political disagreements, scores or sensitivities between Cairo, Ankara or Riyadh. The lack of a unified vision is not in the interest of the Syrian crisis.”

He also said, “We hope that there will be a unified regional position, especially in light of the complexity of the crisis, the threat of which has come to unfold in front of everyone … [Syrian opposition figures] still feel that Cairo has not strongly contributed to finding and adopting a solution to the Syrian crisis.”

Cairo’s success in assuming an effective role in the reunification of the Syrian opposition and activation of the road map will be determined by a diplomatic campaign in an international forum. Such a campaign would promote the Cairo road map in preparation for a new round of negotiations in Geneva, where international actors will again try to find a mechanism to resolve the Syrian crisis.