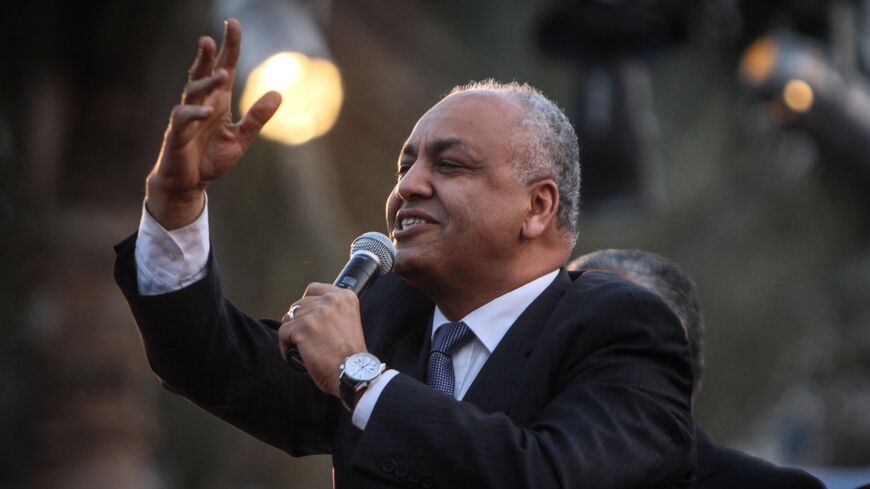 Egyptian lawmaker Mustafa Bakri speaks during a gathering in support of Egypt's former army chief Abdel Fattah al-Sisi in the capital Cairo on May 10, 2014. - MOHAMED EL-SHAHED/AFP via Getty Images

Amid an apparent Arab rapprochement with the Syrian government, some Egyptian parliamentarians have called for an exchange of visits between Egyptian and Syrian officials.

Speaking at a parliament session on March 20, lawmaker and journalist Mustafa Bakri said that Egypt should exchange official visits with the Syrian government, saying that Assad's visit marks an opportunity and sets the stage for all Arab regimes to open up to Damascus.

Bakri suggested that Assad could visit Cairo soon or that Egypt could receive Syrian officials and vice versa.

Speaking on his TV show “Hakaek wa Asrar” March 25, Bakri said, “The four-way summit that was held in the Jordanian city of Aqaba today [March 25] with the participation of the leaders of Egypt, Jordan, Iraq and the UAE discussed the need to reach consensus on Syria’s return to the Arab League and its participation in the next summit.”

On March 18, Assad visited the UAE and met with both Abu Dhabi Crown Prince Mohammed bin Zayed and Vice President and Ruler of Dubai Mohammed bin Rashid Al Maktoum, in his first official visit to an Arab state since the Syrian war erupted in 2011.

Egyptian has been watching the rapprochement with the Syrian regime with growing interest.

Egyptian President Abdel Fattah al-Sisi discussed the Syrian file during his meeting with Saudi Crown Prince Mohammed Bin Salman in Riyadh on March 8, against the background of Saudi opposition over Syria’s return to the Arab League.

During the meeting, Sisi stressed the importance of reaching a political solution to the crisis in Syria in order to fulfill the aspirations of the Syrian people and preserve Syria’s unity and territorial integrity.

Saudi Arabia’s permanent representative to the United Nations Abdullah al-Mouallimi had said in his speech to the September 2021 UN General Assembly meeting, “The kingdom requires that Syria end the control of foreign parties in order for it to return to its Arab environment and the Arab League.”

Shoukry added, “Egypt is keen to advance the political process in Syria and end the current political stalemate. A comprehensive settlement of the crisis should have Syria extend its sovereignty over its entire national territory, all the while guaranteeing the independence of its political decision.”

Egypt is also seeking to have Syria return to the Arab League through alliances with countries that support that approach.

Cairo also tried to put forth Syria’s return to the Arab League and reassure Israel regarding the return of relations with Syria during the Sharm el-Sheikh summit on March 22, which brought together Sisi, Israel’s Prime Minister Naftali Bennett and Abu Dhabi Crown Prince Mohammed bin Zayed.

The Israel Hayom newspaper reported, “The three leaders discussed Syria’s return to the Arab League and its implications on Israel and the region.”

Egypt is involved in efforts to mitigate Turkish influence in the Syrian territories, with Cairo chairing the meeting of the Arab League's ministerial committee tasked with monitoring Turkish interference in the internal affairs of Arab countries on March 3.

This prompted the Turkish Foreign Ministry to issue a statement rejecting the results of the meeting, reading, “The decisions of the Arab League foreign ministers meeting against Turkey are ... not based on any evidence and Turkey respects the sovereignty of all Arab countries."

Although the Egyptian-Syrian relations did not develop into an exchange of official visits between the two countries, the Egyptian state was keen to open bridges of communication between diplomatic channels in an open and official manner. On Sept. 24, 2021, Shoukry and his Syrian counterpart Faisal Mekdad met in New York.

Shoukry commented on his meeting with his Syrian counterpart Mekdad, “Egypt was not involved in any way in any of the events that took place over the past 10 years in the Syrian crisis.”

In televised statements on Oct. 2, 2021, Shoukry said, “Egypt wishes to be active in helping Syria and restoring its position and stature in the Arab national security.”

Security relations between the Egyptian and Syrian regimes have continued uninterrupted throughout the Syrian war. Syria’s National Security Bureau chief Ali Mamlouk visited Cairo on Dec. 22, 2018, and met with Abbas Kamel, who heads Egypt’s General Intelligence Directorate. In October 2016, Mamlouk had also paid an official visit to Cairo and met with Khaled Fawzy, the head of Egypt’s general intelligence.

Tarek Fahmy, professor of political science at Cairo University, told Al-Monitor, “Exchanges between Damascus and Syria could begin with visits between Egyptian and Syrian MPs and public figures in order to pave the way for an exchange of official visits,” which he called "long overdue.”