Egypt has announced the resumption of Saudi oil shipments in what appears to be a move toward reducing the tension between both countries that has escalated over the past years, mainly over the Syrian crisis. 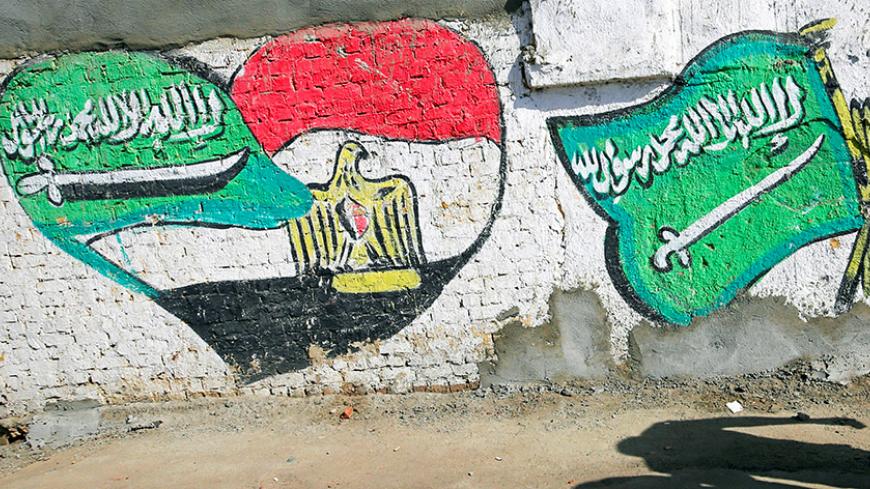 The shadows of men walking are seen in front of graffiti depicting relations between Egypt and Saudi Arabia in Cairo, Egypt, Oct. 12, 2016. - REUTERS/Amr Abdallah Dalsh

Aramco had suddenly suspended these shipments in October 2016, after Saudi envoy to the United Nations Abdallah al-Mouallimi criticized Egypt’s vote in favor of a Russian resolution on Syria before the UN Security Council. It appeared that Egypt and Saudi Arabia were not on the same page regarding the Syrian crisis.

Analysts Al-Monitor spoke with believe the Saudi petroleum shipments to Egypt were resumed to reduce political tensions between the two countries. At the same time, the Egyptian government submitted a maritime border demarcation agreement to parliament on March 14 to transfer the ownership of the two Red Sea islands of Tiran and Sanafir to the kingdom. Until now, the agreement is still being discussed in parliament awaiting to be ratified in case of approval of all members of parliament.

Abdul Menhem Said, the director of the Regional Center for Strategic Studies, considered the resumption of Saudi petroleum shipments to Egypt “a good sign for renewed Saudi-Egyptian understanding, after months of open disputes, especially on the Syrian issue. This delayed the transfer of ownership of the islands to the kingdom, angering Saudi Arabia and prompting it to suspend the shipments.”

The disputes escalated after Egypt’s Supreme Administrative Court nullified in mid-January the agreement that was signed between the two countries to transfer the ownership of Tiran and Sanafir islands, following the official visit of Saudi King Salman bin Abdul-Aziz Al Saud to Cairo in April 2016. Consequently, the two islands would return to Egyptian sovereignty. But the Egyptian parliament insisted on discussing the agreement.

Saudi Arabia and Egypt had different perspectives on the Syrian crisis. Egypt rejected the Saudi calls to put boots on the ground in Syria to remove Syrian President Bashar al-Assad’s regime for good. To make matters worse, Egypt’s envoy to the UN Amr Abdellatif Aboulatta voted on Oct. 9 in favor of a Russian-backed draft resolution on Syria that Saudi Arabia was firmly opposed to.

Said told Al-Monitor that “suspending Aramco’s shipments was painful for Egypt, amid the economic crisis that has been plaguing it.”

He added, “The region is facing critical challenges due to the events of the past years, and these must be addressed through Saudi-Egyptian understanding. The threat of Iranian advancement into the Gulf states is constant, and potential clashes between Iran and Israel on Syria are likely to happen.”

Saudi Arabia has always criticized the Iranian meddling in Gulf affairs. The kingdom even severed its diplomatic ties with Iran and expelled the Iranian diplomatic mission in early January.

Deputy Crown Prince Mohammed bin Salman sees Iran as a security threat for the region, as he said during his meeting with US President Donald Trump March 15.

Said ruled out the possibility that this meeting prompted the resumption of Saudi petroleum shipments to Egypt. He said, “An envoy from the Saudi ruling family was present in Cairo before Salman visited Washington to discuss the dispute and the resumption of petroleum shipments. Saudi Arabia took its decision before the meeting with Trump because such issues cannot be solved overnight.”

Director of the Egyptian Forum for Economic and Strategic Studies Rashad Abdo said, “Egypt largely relies on petroleum shipments from Saudi Arabia, which agreed to supply it with 700,000 tons of refined oil products per month over a period of five years. Saudi Arabia imposes a 2% interest rate on payment that can be settled over 15 years, with a grace period of three years.”

Abdo told Al-Monitor that Egypt expedited its measures following the suspension of Saudi petroleum shipments and found substitutes to make up for the local market needs. Egypt signed an agreement with Iraq in February to import 1 million barrels of crude oil per month for a whole year. He said, “Saudi shipments were resumed thanks to official diplomatic efforts from both countries, and understandings and solutions are underway regarding controversial issues. Egypt and Saudi Arabia are the most powerful in the Arab region and their cooperation is important for maintaining the region’s stability, especially with the challenges resulting from the Arab Spring.”

Said noted, “Deeper rapprochement is expected in the coming months, with the Arab Summit just around the corner, before the end of March.”

Egyptian member of parliament and TV host Mustafa Bakari said March 16 in his show "Haka’ek wa Asrar" ("Facts and Secrets") that talks between Egyptian President Abdel Fattah al-Sisi and King Salman are expected on the sidelines of the Arab Summit to discuss bilateral issues. He noted, “The resumption of Saudi petroleum shipments is the biggest proof of improved relations between Saudi Arabia and Egypt.”

On March 18, Salman tweeted on his official account, “The kingdom is looking forward to stronger ties with brothers and friends to continue the journey of stability and growth.”

Anwar Eshki, a former Saudi general and director of the Middle East Center for Strategic and Legal Studies, told Al-Monitor from Saudi Arabia, “King Salman’s tweet indicates a new phase of alliance between Cairo and Riyadh to face the risks threatening the region.”

Eshki said, “Resuming oil shipments will dispel the differences in opinion between the two countries. Relations between friends do not end with one dispute or another.” He added that Sisi has reiterated his interest in preserving Arab national security, and that this is the meeting point in the two countries’ bilateral relations.