Egypt's vote in favor of the French and Russian draft resolutions on Syria at the UN Security Council has created a rift in its ties with Saudi Arabia. 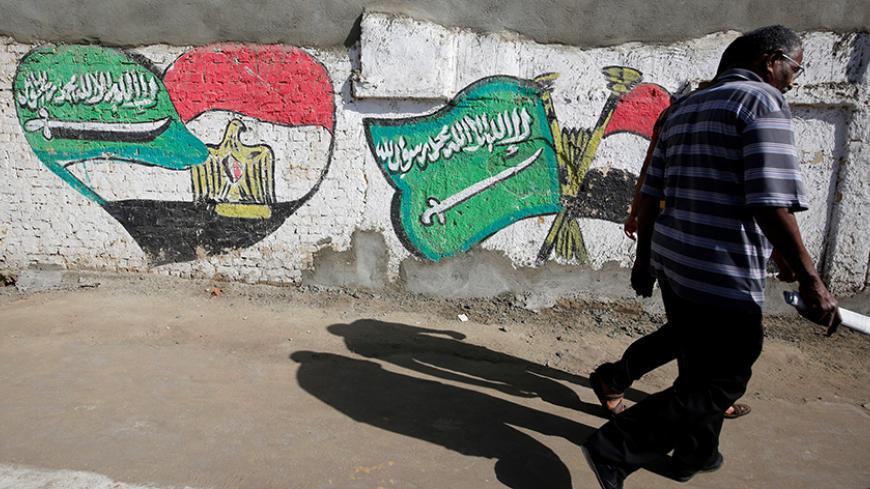 CAIRO — Relations between Saudi Arabia and Egypt have recently grown tense in light of their conflicting views on the Syrian crisis. On Oct. 8, the United Nations Security Council considered two draft resolutions (one sponsored by France, the other by Russia) on the situation in Aleppo. Egypt voted in favor of both resolutions, drawing criticism from Saudi Arabia, which supported the French draft.

Egyptian Oil Minister Tariq al-Mulla told the media Nov. 8 that the Saudi Arabian Oil Co. has suspended its oil shipments to Egypt, even though the two countries signed a five-year agreement in April whereby Saudi Arabia would provide Egypt with petroleum products.

On Nov. 15, King Salman bin Abdul-Aziz Al Saud received Ahmed Aboul Gheit, the former Egyptian foreign minister and current secretary-general of the Arab League, in the Saudi capital of Riyadh, where they discussed the general Arab situation and the role of the Arab League in promoting Arab unity. The visit seemed to be an attempt by the Arab League to reconcile the views of Egypt and Saudi Arabia.

Ayman Samir, an expert on international relations and the former editor of Egyptian newspaper As-Siyassa, believes Aboul Gheit’s visit to Riyadh could ease tensions, especially since the secretary-general has strong ties with Gulf states and was an Egyptian minister of high caliber.

“Saudi Arabia must reconsider its position in order to mend its ties with Egypt, especially since the crisis stirred by Egypt’s vote at the Security Council has been amplified in the media in both countries," said Samir. "The Egyptian stance on the Syrian crisis is not new. Egypt believes that the implementation of the 2012 Geneva I declaration is paramount and that state institutions must be preserved in Syria.”

He added, “While Egypt believes that it must maintain good relations with the Syrian regime's allies to resolve the crisis, Saudi Arabia wants to end the [Bashar al-] Assad regime and is supplying the opposition with weapons. Some Saudi politicians act according to the 'If you're not with us, you're against us' mentality.”

Free Syrian Army (FSA) military sources told Al-Arabiya in 2013 that the FSA uses anti-tank missiles supplied by Saudi Arabia. In October 2015, Saudi Arabia provided the FSA with 500 TOW anti-tank missiles. The BBC reported that “Saudi Arabia is responding to the recent Russian airstrikes on Syrian rebels by stepping up its arms supplies," quoting a Saudi source as saying that “the weapons would go to the FSA and other small rebel groups.”

Samir said that Egypt does not want to break ties with Saudi Arabia. He expects that special bilateral relations will soon resume between the two countries, as they both need each other.

Al-Azab Tayeb al-Tahir, who covers the Arab League for Al-Ahram newspaper, told Al-Monitor that Aboul Gheit’s visit to Riyadh was positive on two levels: The visit mended the relationship between the Arab League and Saudi Arabia, and also put Egyptian-Saudi relations on the right track, preventing their deterioration.

“Relations between Saudi Arabia and the Arab League under the mandate of former Secretary-General Nabil Elaraby from May 2011 to July 2016 were cold because of the constant disagreement between Elaraby and Ahmed Qattan, the Saudi ambassador to Egypt and permanent representative of Saudi Arabia to the Arab League," said Tahir. "The two had converging political and economic stances within the league, since the Saudi representative wanted to reduce administrative expenses, close some representation offices and impose salary cuts."

He added, “The Saudi king appreciated the efforts exerted by the Arab League to reunify Arab ranks, and Aboul Gheit’s visit was the result of joint efforts with the United Arab Emirates.”

Crown Prince of Abu Dhabi Mohammed bin Zayed visited Cairo Nov. 11 to meet with Egyptian President Abdel Fattah al-Sisi. According to a statement issued by the Egyptian presidency, the meeting discussed the reunification and solidarity of Arab ranks and the need to keep a vigilant eye on all attempts to stir up a row between Arab countries in a bid to destabilize the region.

After the visit, bin Zayed headed directly to Riyadh, in what seemed to be a mediation process between Egypt and Saudi Arabia.

Tahir said, “The UAE is making great efforts alongside the Arab League for the reunification of Arab ranks, especially since the UAE wants to maintain its triangle of stability with Egypt and Saudi Arabia in the region.”

"A small step is still needed, and things will go back to normal," said Moallem. "When Syria and Egypt are together, the Arab nation would be fine. Egypt, with its great people and army, cannot stand idly by watching what is happening in Syria. Syria also cannot help but sympathize with the Egyptian army fighting terrorism in the Sinai [Peninsula].”

Two days after Moallem's comments, Sisi told Portugese TV, “It is better to support national armies to impose their control over their territories and preserve stability. This applies to the national armies of Libya, Syria and Iraq.”

In any event, Egypt has always emphasized the need to preserve the institutions of the Syrian state and stop the Syrian bloodletting to reach a political settlement. However, Sisi’s recent announcement stressing the need to support the Syrian army in its war on terrorism may give the impression that Egypt is now siding with the Assad regime, which threatens to sour relations more between Cairo and Riyadh, regardless of any regional efforts for Arab reunification.