Egypt appears to be leading Arab efforts to bring Damascus back to the Arab League and find a political solution to the Syrian crisis, in a bid to confront Turkey’s military ambitions in Syria. 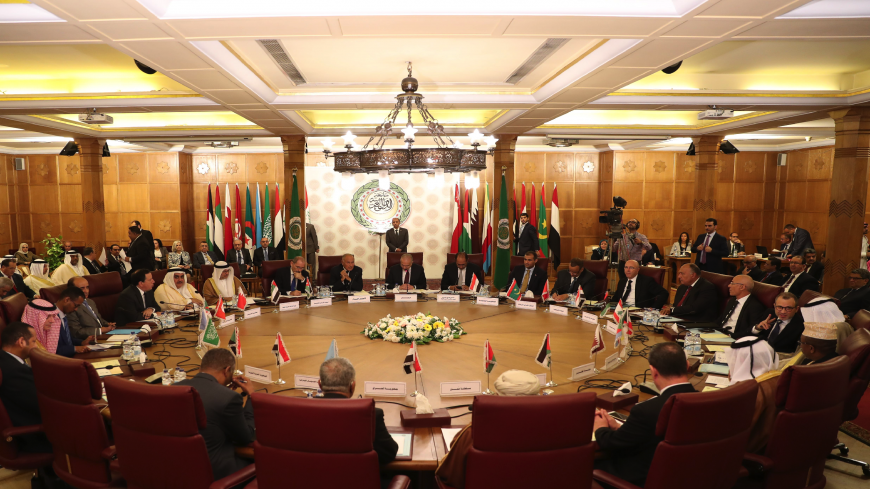 Representatives of the League of Arab states attend an emergency meeting at the Arab League headquarters in Cairo on Oct. 12, 2019, to discuss Turkey's offensive on Syria. - MOHAMED EL-SHAHED/AFP via Getty Images

Egypt is working on unifying the stance of Arab countries vis-a-vis the Syrian crisis. On Nov. 26, Egypt, Saudi Arabia, the United Arab Emirates (UAE) and Jordan held a meeting at the level of foreign ministries to look into the developments of the Syrian war.

On the same day, the Egyptian Foreign Ministry issued a statement saying that “the meeting between the four countries discussed ways to resolve the Syrian crisis in accordance with UN Security Council Resolution 2254, in a manner that preserves Syria’s unity and territorial integrity.”

On Dec. 18, 2015, the UN Security Council issued Resolution 2254, providing for a cease-fire and political settlement in Syria.

“The meeting between the four countries looked into strengthening joint efforts to preserve the Arab identity of Syria and the capabilities of the brotherly Syrian people,” the ministry’s statement read.

Similarly, Jordan’s Foreign Ministry also said in a Nov. 26 statement that the “meeting with Egypt, the UAE and Saudi Arabia discussed ways to boost joint efforts to support a political settlement for the Syrian crisis in such a way to preserve the unity of Syria and its territorial integrity.”

Tarek Fahmy, a professor of political science at Cairo University, told Al-Monitor, “The meeting between the four countries sends a message to the international community that they have renewed their interest and role in the Syrian crisis.”

On Dec. 22, 2018, head of the Syrian National Security Bureau Maj. Gen. Ali Mamlouk visited Cairo and met with the head of Egypt's General Intelligence Service, Abbas Kamel. Mamlouk’s visit back then was the first since 2016. In October 2016, Mamlouk had paid an official visit to Cairo and met with Deputy Head of the National Security Agency in Egypt Maj. Gen. Khaled Fawzi.

“Cairo has been recently seeking to mobilize Arab countries and unite their stances vis-a-vis the Syrian crisis in a bid to put an end to Damascus’ isolation and prevent further Turkish interventions and attempts to divide Syria,” Fahmi explained.

“Egypt was successful in forging a tripartite alliance with Jordan and Iraq and bridging views between the two sides on several issues, notably the Syrian crisis,” he added.

In August, the closing statement of a summit between the leaders of Egypt, Jordan and Iraq stressed the “importance of intensifying efforts to reach political solutions to the Syrian crisis in such a way to preserve the country’s unity, independence and the capabilities of its people, and to prevent foreign interventions aimed at destabilizing Arab national security.”

Fahmi said the Egyptian Foreign Ministry’s Nov. 26 statement “emphasized that the four countries (Egypt, Jordan, the UAE and Saudi Arabia) to the meeting underlined the Arab identity of Syria, which is an indication that Egypt is beginning to make efforts on the ground for Damascus to return to the Arab League, and to persuade the Gulf countries not to oppose such a move.”

In the same context, Mohammad Mujahid al-Zayat, an academic adviser at the Egyptian Center for Strategic Studies, told Al-Monitor, “Egypt took advantage of the change in the positions of the Gulf countries, especially the UAE and Saudi Arabia, on the Syrian crisis given their fears of Turkey’s expansion and increasing influence. The meeting of the foreign ministries came to address these fears and to agree on the need to bring Syria back to the bosom of the Arab countries.”

The UAE had reopened its embassy in Damascus in December 2018. More recently in November, Saudi Arabia allowed Syrian trucks loaded with Syrian goods to enter its territory after Riyadh had banned them. “Syrian trucks were allowed to enter Saudi territory, and a decision was issued to grant Syrian truck drivers a visa in order to cross the Saudi border,” said Fayez Qassuma, vice president of the Export Committee in the Damascus Chamber of Commerce, on Nov. 1.

In December 2018, Jordan’s King Abdullah II stressed that “Jordan’s relations with Syria will soon return to what they used to be before.”

“The meeting between the four Arab countries reflects the beginning of a quadruple Arab alliance to confront Turkish interference and military ambitions in Syrian territories,” Zayyat said.

“Egypt realizes that Syria’s absence from the Arab league opens the door for Turkish interventions. This is why Cairo has been playing a remarkable role with the Syrian opposition and the Syrian regime and has been seeking to unify Arab and Gulf positions vis-a-vis the Syrian crisis in order to curb Turkey’s influence in the region,” he explained.

Egyptian Foreign Minister Sameh Shoukry announced on Nov. 5 Cairo’s rejections of any forced demographic change occurring in Syria, stressing the need for political mobilization for an effective response to the armed terrorist groups there.

“Egypt’s efforts to confront Turkey’s ambitions in Syria will only be successful through coordination with Arab countries, notably Saudi Arabia and the UAE,” Bayoumi said.

He added, “Syria will soon return to the Arab League. It does not make sense for Damascus to be absent from the league while the Syrian regime continues to participate in UN events. Egypt is seeking, through the last meeting with the four Arab countries, to mediate with the Gulf in a bid to alleviate tension with the Syrian regime and eventually bring Damascus back to the Arab League.”

Bayoumi went on to say that “Egypt is trying to persuade Arab and Gulf countries to restore relations with Damascus, with the need to conduct political reforms within the Syrian regime in order to help Syria face Turkish aggression and curb Iranian influence in light of the Arab absence from the Syrian arena.”

He stressed that Syria’s isolation has helped Turkey and Western countries to interfere in Damascus’ affairs, which prompted the UAE and Saudi Arabia to show more flexibility in discussing Syria’s return to the Arab League.

Abdullah Bin Yahya al-Mualimi, Saudi Arabia’s ambassador to the UN, had said in an Oct. 6 statement that “Syria must one day return to the Arab League.”