The meeting between the Saudi and Syrian intelligence chiefs is a further step to reintegrate Syria's role in the Arab League — which is opposed by the United States. 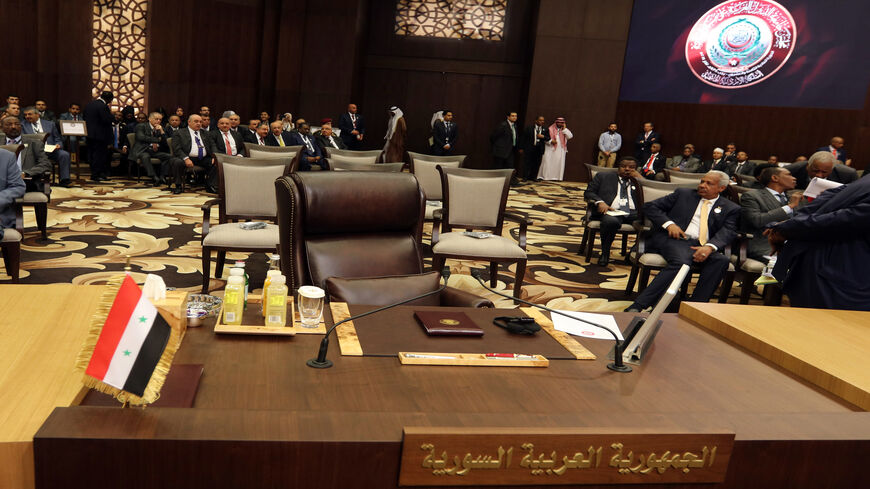 The empty seat of the representative of Syria is seen during the Arab League summit, Sweimeh, Jordan, March 29, 2017. - Khalil Mazraawi/AFP via Getty Images

CAIRO — Saudi Arabia's intelligence chief Gen. Khalid bin Ali Al Humaidan met Nov. 13 with his Syrian counterpart Hussam Luka in Cairo, on the sidelines of the Arab Intelligence Forum. This comes as part of the Egyptian efforts to unfreeze Damascus’ membership in the Arab League and end any Arab disputes.

On Nov. 9, Egypt hosted the Arab Intelligence Forum, which was attended by a number of the intelligence services’ directors in the region. During the forum that discussed many regional and international issues, Egyptian President Abdel Fattah al-Sisi addressed the attendants via videoconference, and urged the directors to further cooperate in countering the challenges in order to preserve the Arab national security and stability.

So far, no official statement has been released by Saudi Arabia or Syria on the meeting.

Tarek Fahmy, professor of political science at Cairo University, told Al-Monitor that the meeting carries a symbolic significance and is an important sign indicating that Arabs welcome Syria’s return to the Arab League after a 10-year hiatus.

Speaking by phone, he said that Egypt has always played a pivotal and pioneering role in the region, and its efforts have succeeded in converging the views between Arab countries and Syria, which led to improved relations between the parties. Syria’s return to the league is now a matter of time, and it could happen at the next Arab summit slated for March in Algeria, according to Fahmy.

He noted that Egypt and Syria have continued to be in touch at the security level, and that Cairo made great efforts during the bilateral consultations with the Arab countries in order to convince them of the need to open channels of communication with Damascus and bring Syria back to the Arab League. These consultations have positively reflected on the Syria-Arab relations. Jordan opened its borders with Syria, and the heads of the two states have spoken. Also, there are good contacts with the United Arab Emirates (UAE) and Iraq, and recently Saudi Arabia joined them.

Fahmy believes that it is only normal to bring Syria back to the Arab League after the improvement of relations, which is a matter of concern to Iran, Turkey and Israel, because it is in their interests to keep Syria’s membership frozen. But the Arab leaders at the next summit in Algeria are the ones who will decide whether or not Damascus will return to the league, he added.

Gamal Bayoumi, secretary-general of the Cairo-based Arab Investors Union and Egypt's former assistant foreign minister, told Al-Monitor by phone that the meeting in Cairo proves that Egypt managed to bring closer the views between Arab countries and Syria, and indicates that their relations are developing, which is important in light of the challenges facing Arab national security.

Bayoumi said that Egypt, with its weight and regional power, is able to bring Syria back to the Arab League, through the strong influence it has on Arab decision-makers, mainly Saudi Arabia, the UAE, Iraq and Damascus. Thus, unfreezing Syria’s membership in the Arab League has become a matter of time, he said.

He pointed out that Egypt and Syria enjoy historical and close relations, and despite the boycott over the past years, they did not break off relations and their security contacts have been ongoing, which preserves their common interests.

Hussein Haridi, Egyptian ambassador and former assistant foreign minister, told Al-Monitor, that the meeting between the Saudi and Syrian intelligence directors in Cairo is encouraging and positive in the course of relations between Riyadh and Damascus, after years of tension and disagreements.

At the same time, he did not view “any correlation between this meeting and Syria’s return to the league." He added, "But it is a positive step forward, and we hope that the upcoming Arab summit in Algeria will announce Syria’s return.”

He said that Egypt made major efforts over the years to bring views closer and boost relations between Arab countries and Syria. Egypt is also committed to United Nations Security Council Resolution 2254 on a political settlement of the Syrian crisis and its territorial integrity. Egypt’s position is clear when it comes to supporting the national state against armed militias in order to maintain the stability of Syria, and it has always supported the choices of the Syrian people, who have the right to choose their own destiny, he said.

Haridi explained that boycotting Syria during the past years failed, and has not achieved any significant successes. Hence, a shift in the approach and Syria’s return is logical, which will have a positive impact in the region and contribute to the political settlement of the Syrian crisis.