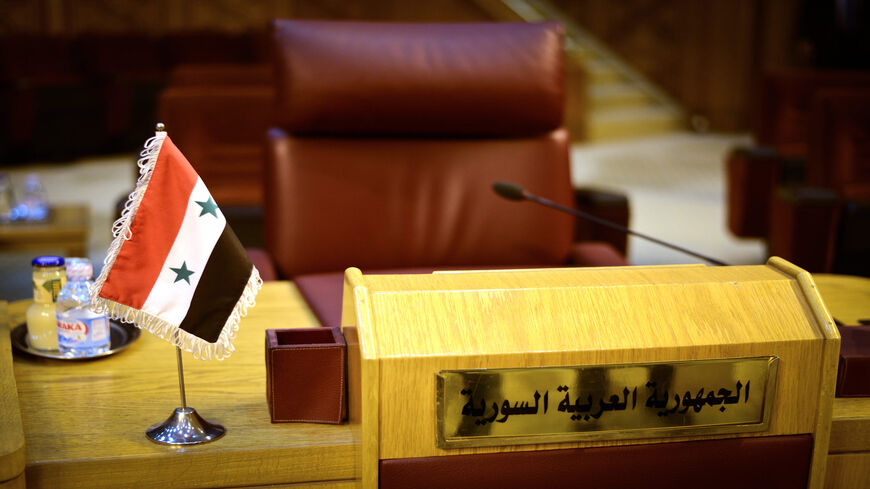 The empty seat of Syria is seen during an emergency representatives meeting to discuss the conflict in Libya, at the Arab League headquarters, Cairo, Egypt, Jan. 5, 2015. - Mohamed El-Shahed/AFP via Getty Images

Egypt has recently been making concerted efforts in the Syrian political crisis, supporting Damascus’ return into the Arab fold, as confirmed by Egyptian Foreign Minister Sameh Shoukry in a statement Oct. 2.

During a press conference Oct. 27 with his Romanian counterpart Klaus Werner Iohannis, Egyptian President Abdel Fattah al-Sisi said, “Egypt refuses any attempts by regional stakeholders to impose a fait accompli, whether by violating Syrian sovereignty or making demographic changes in the country.”

Sisi’s statements come in conjunction with an official and declared Egyptian rapprochement with the Syrian government and Cairo’s efforts to play an influential role in solving the Syrian crisis.

The Egyptian Foreign Ministry announced that a meeting was held between Shoukry and his Syrian counterpart Faisal Mekdad on Sept. 24.

Commenting on the meeting, Shoukry said in a televised statement Oct. 2, “Egypt has not been involved in any way in the events that took place in the past 10 years during the Syrian crisis. Egypt wishes to be active in helping Syria to retake its position in the Arab national security."

Shoukry pointed out, “The goal of the meeting with the Syrian foreign minister was to explore how Egypt can contribute to ending this crisis and help Syria’s independence and its return to the Arab fold.”

In a televised statement Oct. 28, Arab League Secretary-General Ahmed Aboul Gheit said, “Syria might be readmitted to the league during the next summit in the event of an Arab consensus in this regard. Many Arab countries wish to see that happen.”

During the month of October, Shoukry intensified his efforts to help resolve the Syrian crisis.

On Oct. 4, the Egyptian foreign minister discussed with his Russian counterpart, Sergey Lavrov, developments in the Syrian issue. During a press conference with Lavrov, Shoukry said, “Egypt is keen to see Syria getting out of its crisis,” stressing the “importance of Syria being an active part in the Arab world.”

On Oct. 14, he met with UN Envoy to Syria Geir Pedersen to discuss ways to make a breakthrough.

Meanwhile, the Jordanian Royal Court announced that King Abdullah II received Oct. 2 a phone call from Assad for the first time since the outbreak of the Syrian war in 2011.

Tariq Fahmy, professor of political science at Cairo University, said, “There have been concerted efforts on the part of Jordan, Egypt and the UAE to see Syria participating in the upcoming Arab summit slated for March in Algeria.”

In August, Algerian Foreign Minister Ramtane Lamamra said, “My country supports the proposal of Syria’s return to the Arab League. Having Syria regain its seat in the league would be a major step for Syria to return to the Arab fold.”

Fahmy noted, “Egypt’s relations with the Syrian regime have developed significantly, after being limited to security meetings only over the past years.”

On Aug. 19, the Lebanese presidency announced that the United States informed Lebanese President Michel Aoun of a plan that includes Jordan, Syria and Egypt to help alleviate the crippling power crisis rocking Lebanon.

The United States, however, has maintained its opposition to efforts to restore ties with Damascus. Last month, Secretary of State Antony Blinken, speaking at a press conference with UAE Foreign Minister Abdullah bin Zayed, said Washington would not support efforts to normalize ties with Damascus "until there is irreversible progress toward a political solution."