Egyptian Foreign Minister Sameh Shoukry took advantage of his visit to Oman to speak about Egypt’s ongoing efforts to communicate with Arab countries to facilitate Syria's return to the Arab League. 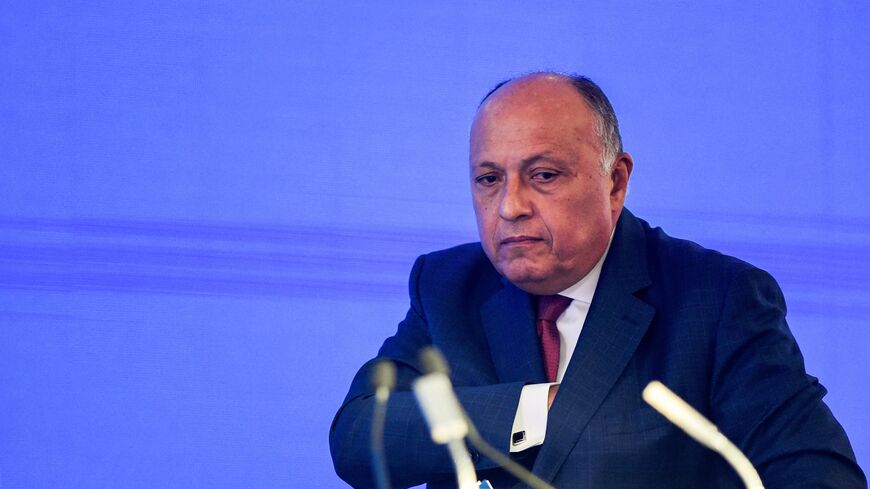 Egypt has recently put forward an initiative to facilitate Syria’s return to the Arab League.

Speaking at a press conference alongside Omani Foreign Minister Sayyid Badr Albusaidi in Muscat on Jan. 23, Egyptian Foreign Minister Sameh Shoukry said, “We hope that conditions will be available for Syria to return to the Arab domain and become an element supporting Arab national security. We will continue to communicate with Arab countries to achieve this purpose.”

Egypt chose to launch its initiative from Oman because it is one of the most prominent Gulf countries that enjoys close relations with the Syrian government. In July 2021, Albusaidi told the Saudi Asharq Al-Awsat newspaper that his country supports Syria’s return to the Arab League.

On May 31, 2021, Oman’s Sultan Haitham bin Tarik was the first Gulf leader to congratulate Syrian President Bashar al-Assad on his re-election as president of Syria.

The Omani-Syrian relations were not only limited to statements. Oman was the first Arab and Gulf country that Syrian Foreign Minister Faisal Miqdad visited after taking office in March 2021. During his visit, Miqdad said, “Oman has stood by Syria in its war on terrorism and extremism from day one. ... All Syrians respect and appreciate this Omani stance.”

In October 2015, then-Omani Foreign Minister Yusuf bin Alawi paid a remarkable visit to Syria despite the tense Gulf-Syrian relations at the time. In May 2019, Alawi held talks with Assad in Damascus.

Egypt is trying to exploit the Omani position to convince the Gulf states to re-admit Syria to the Arab League, especially Saudi Arabia.

The permanent representative of Saudi Arabia to the UN, Abdallah al-Mouallimi, stressed in September 2021 that “the kingdom requires that Syria get rid of the control of foreign parties, in order for it to return to its Arab environment and the Arab League.”

Egypt tried again to unify the Arab position when Algerian President Abdelmadjid Tebboune visited Cairo and met with his Egyptian counterpart Abdel Fattah al-Sisi on Jan. 25. The pro-government el-Balad newspaper stated that Tebboune's visit to Cairo proves that “there is Egyptian-Algerian cooperation for Syria's return to the Arab League.” Algeria agrees with the Egyptian desire for Syria to participate in the Arab Summit set for March.

Shoukry and Miqdad  met in New York on Sept. 24, 2021. On Oct. 2, Shoukry said in a television interview, “Egypt seeks an active role in helping Syria and restoring its position and stature in the Arab national security.”

Ghattas added, “Oman was the first Gulf country to restore ties with the Syrian regime, followed by the UAE, so the Gulf position toward Syria is gradually changing,' adding that "it is difficult for this initiative to change Saudi Arabia's hard stance amid the latter’s concerns over the growing Iranian influence in Damascus.”