Egyptian President Abdel Fatah al-Sisi is opposed to plans by the other members of the Anti-Terror Quartet to confront Iran and Hezbollah in the Levant, to maintain Lebanon's relatively stable position. 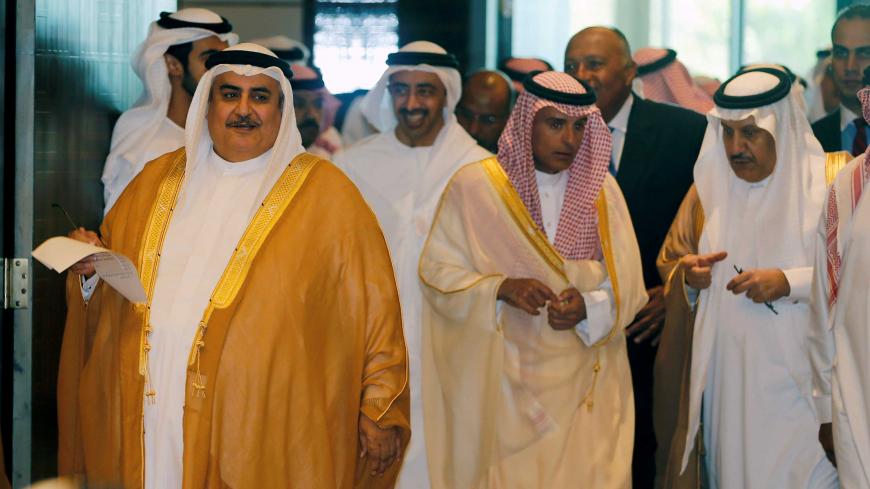 The Anti-Terror Quartet (ATQ) — Bahrain, Egypt, Saudi Arabia and the United Arab Emirates (UAE) — severed diplomatic and economic ties with Doha June 5 due to a host of issues stemming from Qatari foreign policy. Nonetheless, these four states joined the ATQ for unique reasons based on specific grievances. For instance, although the ATQ’s three Gulf Cooperation Council (GCC) states interpret Doha’s ties with Tehran as a major dimension of the "Qatari threat" that must be addressed, Egypt’s reason for punishing Doha stemmed from the emirate’s support for Sunni Islamist groups — chiefly the Muslim Brotherhood — and not from Qatar’s relationship with Iran nor Doha’s alleged support for Iranian-backed militias in the Levant and Arabian Peninsula.

Illustrating Cairo’s opposition to the other ATQ members’ plans for stepping up confrontation with Iran in the Levant, Egyptian President Abdel Fatah al-Sisi expressed his position against military strikes on Iran and Hezbollah on Nov. 8. Although Sisi reassured the other ATQ states that “Gulf national security is Egyptian national security,” his view is that shifting efforts toward countering Hezbollah would jeopardize Lebanon’s power-sharing equilibrium that has left the Mediterranean country in relative peace this year and potentially upset global/regional efforts to combat the Islamic State (IS).

Having allied Cairo with Damascus after ousting Egypt’s Muslim Brotherhood President Mohammed Morsi in 2013, Sisi views the Syrian nation-state’s preservation as serving Egypt’s interest and Bashar al-Assad’s regime as a bulwark against radical Islamic extremism in the Levant, which has fueled tension in Egypt-GCC relations. Odds are good that Egypt would oppose efforts to weaken the Lebanese group, whose operations in Syria have largely contributed to the Damascus regime’s victories over GCC- and Turkey-backed Sunni rebels. Moreover, as the Egyptian military is bogged down in the Sinai Peninsula combatting ultra-violent Salafi-jihadis and busy cooperating with Field Marshal Khalifa Hifter’s fight against Islamist militants in Libya, Egypt is not interested in stepping up confrontation with Hezbollah.

As the Egyptian regime is focused on IS-affiliates and the Muslim Brotherhood without any significant "Shiite threat" in Egypt, Cairo believes that the ATQ should extend its targeting of alleged state sponsors of terrorism to Turkey, not Iran. Although the UAE shares Egypt’s opposition to Turkey’s pro-Muslim Brotherhood Justice and Development Party, Abu Dhabi — along with Riyadh and Manama — is keen to avoid letting the Qatar crisis jeopardize its ties with Turkey. The fact that the Saudi/UAE-led bloc did not heed Sisi's call to boycott Turkey after the Gulf dispute broke out highlighted this gap in the ATQ members’ perceptions of the pro-Muslim Brotherhood leadership in Ankara.

Saudi Arabia and the UAE are both major investors in Turkey and destinations for Turkey’s construction firms. These two GCC members are Turkey’s top trade partners in the council, although that may soon change due to the Qatar crisis’ boosting of Turkish-Qatari trade. The ATQ’s GCC members — as of five years ago — accounted for a quarter of Turkey’s defense exports. Currently, amid the raging Yemeni crisis, Riyadh and Abu Dhabi will go to great pains to avoid losing an important arms supplier, particularly as Yemen’s rising civilian death toll and humanitarian crisis increase pressure on Western governments to freeze arms sales to Saudi Arabia and the UAE.

Ultimately, the ATQ states have — for all intents and purposes — three unique foreign policy orientations and interpretations of Iran and Turkey’s role in the Middle East. The Saudi/Bahraini view is that Iran, which represents the No. 1 threat to stability in the Persian Gulf and greater Middle East, must be countered aggressively while Turkey is a natural partner in the Sunni Muslim world, a major economy and a state that the ATQ must cooperate with despite Ankara’s pro-Qatar stance. Egypt sees Turkey as a state sponsor of terrorism that the ATQ should seek to isolate until Ankara recognizes Egypt’s government and severs Turkey’s support for Islamists across the Middle East. The UAE shares the Saudi/Bahraini view of Iran and Egypt’s perception of Turkey as a dangerous actor in the Arab world. Yet Abu Dhabi may not back Sisi’s calls for boycotting Turkey given its economic value to the Emirates.

Over the past five months, the ATQ has remained united in blockading Qatar. Despite such pressure failing to result in Doha capitulating to the Saudi/UAE-led bloc’s 13 demands, it appears unlikely that the ATQ will soften its stance toward Qatar as any concessions entail risks of appearing weak in the region at a time when the leadership in Riyadh and Abu Dhabi are seeking to create new realities in the Middle East through more muscular foreign policies.

As tension in Lebanon mounts following Lebanese Prime Minister Saad Hariri’s bombshell resignation announced Nov. 4 from Saudi Arabia, concerns about a new Middle Eastern war erupting in the Levant are growing. The escalation of regional tensions as Saudi Arabia makes unprecedented moves to weaken Hezbollah’s legitimacy in Beirut while challenging Tehran’s interests in Lebanon will heighten friction not only between Riyadh and Tehran, but there may be also new friction in the kingdom’s alliance with Egypt that has an independent foreign policy in the Levant breaking with the agenda of Cairo’s sponsors in the Gulf. Highly dependent on the GCC states’ financial support, Egypt will face a predicament if Riyadh steps up pressure on Cairo to back the kingdom’s confrontation against Iran in Lebanon. That said, Egypt has continued receiving high levels of aid from Saudi Arabia and the UAE without fulfilling the role in Yemen that Riyadh unsuccessfully sought to convince Cairo to play, underscoring how the GCC states may have no option but to continue backing Sisi regardless of how he responds to Saudi Arabia’s escalating tension with Hezbollah.

Amid the prolonged Gulf dispute’s institutionalization of the Qatar rift, the region is on the verge of further realignment as the Sunni Muslim world polarizes. If the Saudi and Emirati leaders seek to establish the ATQ as an anchor of a new regional order, the bloc will need to address internal divisions over which Middle Eastern countries — aside from Qatar — and nonstate actors in the Arab world the ATQ should target. It remains to be seen whether a common opposition to Qatari foreign policy will be the only dynamic that unites the Saudi/UAE-led bloc or if the ATQ can reach a consensus as to which states are guilty of sponsoring terrorism and devise a strategy for countering them.