Saudis want to bridge the divide between Qatar and Egypt so that its Sunni coalition can focus on Iran. 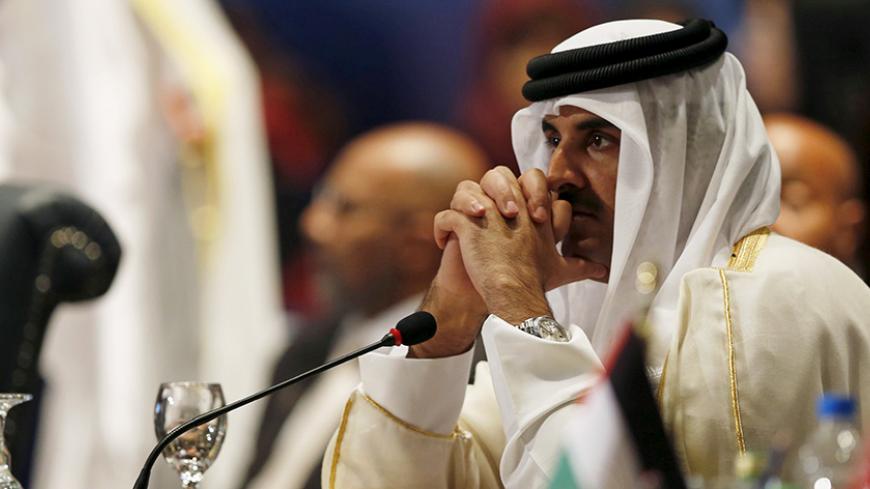 Animosity continues to define Egyptian-Qatari relations, as demonstrated when officials in Doha recently condemned a Cairo court for sentencing two Al Jazeera employees to death on charges of passing Egyptian secret security documents to Qatar during Mohammed Morsi’s presidency. In response, Qatar’s Foreign Ministry accused the court of lacking a “proper sense of justice,” denounced the “unfounded” verdict and called the espionage charges “surprising and unacceptable.” Egyptian officials fired back, blaming the gas-rich Persian Gulf emirate for having “devoted resources and efforts over the past years to mobilize its media mouthpieces to be hostile to the people of Egypt and its state and institutions.”

This diplomatic spat highlights Egypt's and Qatar’s positions on opposing poles of a divided Sunni Arab world. Qatar largely sided with the “Arab Spring” movements of 2011, which led to the loss of power for long-standing rulers in Egypt, Tunisia, Libya and Yemen, creating political vacuums and opportunities for Islamist movements to gain greater visibility and clout across the region. Doha’s critics have argued that the Muslim Brotherhood’s political wings performed well in elections in Egypt and Tunisia (and to a lesser extent in Libya) due to Qatari support.

Egyptian officials' distrust of the Qataris dates back to at least the 1990s. The Hosni Mubarak regime perceived Qatar’s ownership of Al Jazeera, Doha’s relationship with the pro-Muslim Brotherhood regime in Sudan and the emirate’s permission for prominent Muslim Brotherhood figures such as Yusuf al-Qaradawi to freely blast Egypt’s government from Qatari soil as a threat to the stability of Egypt and the greater region. Officials in Cairo said that as a result of a “Qatari vendetta” against Mubarak, Doha sponsored Egypt’s 2011 uprising. The officials also complained about Doha’s meddling in Egypt’s internal affairs years before the “Arab Spring” erupted.

Morsi’s ouster in July 2013 marked a grave geostrategic and ideological setback for Qatar, which had gambled on the Sunni Arab world riding a pro-Muslim Brotherhood current following Morsi’s rise to power. Doha’s resentment of Egypt’s military for overthrowing a leader whose political capital received much Qatari investment and Cairo’s view of Qatar as being supportive of “terrorist” networks (including some in the restive Sinai Peninsula) have defined the poor state of Cairo-Doha relations for the past three years.

As Qatar stands on one end of this ideological spectrum with pro-Muslim Brotherhood Turkey while Egypt stands on the other with the United Arab Emirates, Saudi Arabia seeks to unite these four influential Sunni Muslim states within the Islamic Military Alliance to Fight Terrorism, an anti-terrorism coalition announced by Deputy Crown Prince Mohammed bin Salman in December that has grown to 39 members. The Al Saud rulers envision the military alliance as establishing a strong pan-Sunni front against Iranian/Shiite influence. In Riyadh’s quest to establish a new sectarian order in the region, the kingdom’s leadership has vested interests in seeing its Sunni allies overcome their own divisions and back Saudi plans for the Middle East.

In November 2014, shortly after the ambassadors of Saudi Arabia, Bahrain and the United Arab Emirates returned to Doha following a rift, then-Saudi King Abdullah bin Abdul-Aziz Al Saud sponsored an initiative between Egypt and Qatar. The former Saudi king’s efforts to reconcile Egypt and Qatar received Egyptian President Abdel Fattah al-Sisi’s support and resulted in a meeting in Cairo of Sisi and a member of Qatar’s ruling Al Thani family accompanied by Khalid al-Tuwaijri, a former chief of the Saudi Royal Court.

From the Saudi leadership’s viewpoint, the kingdom simply cannot afford to simultaneously counter both Iran and Sunni Islamist movements whose ideologies represent challenges to the kingdom’s Islamic legitimacy. With King Salman bin Abdul-Aziz Al Saud (who is more favorable to conservative Sunni Islamist movements than his predecessor) at the helm, Riyadh has softened its tone on the Muslim Brotherhood. By permitting important figures from various branches of the movement to visit the kingdom and making sincere efforts to reconcile with Qatar and bury the problems of the past (which climaxed with the diplomatic spat of March 2014), Salman has reached out to Qatar, which has aligned closely with the Saudis on a number of regional issues such as Syria and Yemen since Emir Sheikh Tamim bin Hamad Al Thani inherited the Qatari throne eight days before Morsi’s ouster.

Tamim's attendance at the Sharm el-Sheikh Arab Summit in March 2015 raised speculation in the press of an Egyptian-Qatari rapprochement. This was only one month after Doha officials recalled their ambassador to Egypt after a tense Arab League meeting in Cairo in which the Egyptian delegation alleged Qatari support for global terrorism in response to Doha’s expressed reservations on Egypt’s military campaign against the Islamic State in Libya. Also, one month before Abdullah died, Doha suspended its Egypt-focused Al Jazeera channel, which many analysts understood as a diplomatic overture to Sisi on Doha’s part.

Despite these occasional indicators of progress in Egyptian-Qatari relations mixed with setbacks, the Cairo court’s recent ruling and the angry response from Doha officials appear to suggest that any reconciliation between these two countries is far away. The political leadership in Cairo still views Qatar as Egypt’s enemy because of its perceived role as a major contributor to the growth of extremism and terrorism across the Arab world.

Saudi Arabia’s plans to unify its Sunni allies within the Islamic Military Alliance to Fight Terrorism will face many challenges, some of which the Gulf Arabs are learning from painful lessons in Yemen. Although the kingdom has managed to bring Egypt and Qatar together in military coalitions since July 2013, officials in Riyadh have thus far failed to ease the political and ideological tension between post-Morsi Egypt and the Gulf Arab emirate. The continuation of distrustful and poor relations between Egypt and Qatar will likely undermine Saudi Arabia’s plans for the region and vision of Sunni Arab states unifying against the Islamic Republic.