Although stability seems to prevail in Saudi Arabia under the reign of King Salman bin Abdul-Aziz Al Saud, future rulers are likely to face a slew of problems. 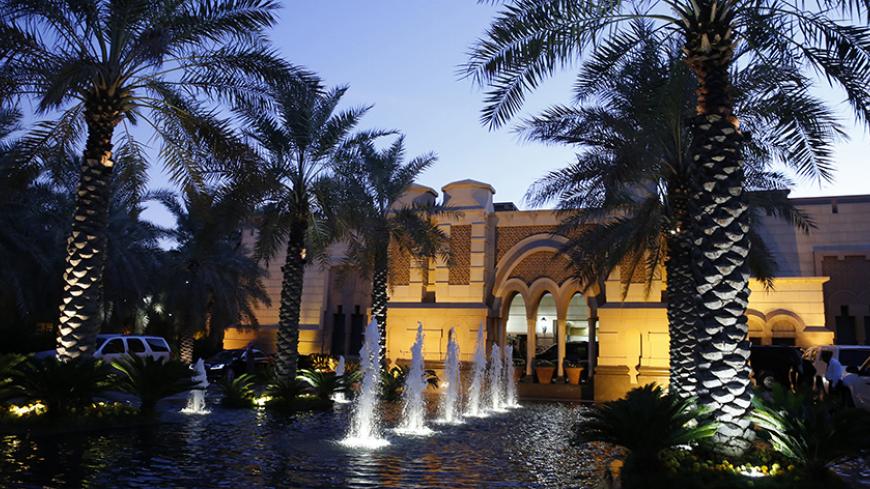 The Erga Palace is seen at sundown as US President Barack Obama meets with Saudi Arabia's King Salman bin Abdul-Aziz Al Saud inside the palace in Riyadh, Jan. 27, 2015. - REUTERS/Jim Bourg

During a June 3 meeting at Al-Salam Royal Palace in Jeddah with officials concerned with the fight against corruption, Saudi King Salman bin Abdul-Aziz Al Saud said, “Any citizen has the right to file a lawsuit against the king, crown prince or any member of the royal family.” He referred to a case in 1928, when an indebted citizen sued Salman's father, King Abdul-Aziz, before Riyadh judge Sheikh Saad bin Atiq.

Regardless of the plausibility of such an incident happening again, the fact that Salman mentioned such a story shows that he aims to emphasize the Saudi regime’s conservative approach and the tight relations between the regime and the Salafist institution. Saudi rulers are subject to Salafist provisions, unlike other state rulers. It is also indicative of Salman’s strong memory.

An official who attended the meeting told Al-Monitor on condition of anonymity that the king mentioned in his speech Saudi Arabia’s three political phases, starting with Muhammad bin Saud in 1744, then moving on from Turki ibn Abdullah in 1824 to the current reign of Salman. According to the official, by mentioning these phases, the king is indicating a current transition into a fourth phase in Saudi Arabia's history, after Salman rearranged the ruling establishment. The authority is now in the hands of the grandchildren of the founding family.

Although the transition process after the death of King Abdullah happened in a quiet and traditional way, as expected, the fast and powerful royal decisions and changes made by Salman immediately after ascending the throne was a sign of royal will to fix what the former head of the Royal Court, Khaled al-Tuwaijri, had done.

Internally, Tuwaijri contributed to the escalation of tension between the Royal Court and the conservatives and princes, as he prevented meetings between princes. Some princes even called him the “supreme leader,” as Tuwaijri was in control of all of the king’s meetings and decisions. Externally, Tuwaijri adopted a hostile policy against the Sunni political Islamic movements that have allowed Shiite organizations to operate over vast geographical and political areas, which gave the Shiite movements the opportunity to spread and to impose their control in favor of Iranian influence. For instance, Houthis took advantage of the Gulf’s preoccupation in the war against the Muslim Brotherhood to spread in Yemen.

Accordingly, many Saudis believe that the decision to conduct Operation Decisive Storm against Houthi militias in Yemen was one of the most important made by Salman. This is why the move was met with wide popular support, which reached its peak at the beginning of the air campaign but began to lose its luster as time passed and material and human losses increased.

Unlike the decision to wage war — which is considered an exceptional event in Saudi policy, as Saudi Arabia has avoided since its inception any direct confrontation with an external party — the decisions to appoint people to certain positions are routine and do not draw the attention of Saudi citizens. Changes considered important in Saudi Arabia are usually linked to the presence of the king and lose importance when he is not present.

One of the most important changes associated with the presence of politically conservative Salman is the creation of the Council of Political and Security Affairs on Jan. 29, headed by Crown Prince Mohammed bin Nayef. The prince’s presence as a top authority suggests confidence inside Saudi Arabia and abroad, particularly in Western countries, since security cooperation between the West and Saudi Arabia grew after he became interior minister in 2012. He is considered one of the first grandchildren involved in the succession after replacing his uncle Muqrin bin Abdulaziz as crown prince in April. Mohammed bin Nayef is expected to be the first king of the fourth phase of Saudi Arabia; he will be the only one able to ensure Mohammed bin Salman will be the future crown prince.

The Council of Economic and Development Affairs was also created on Jan. 29 and headed by Mohammed bin Salman, the youngest prince and defense minister. He is also the youngest official to handle such large financial operations in the Middle East and perhaps the world. He does so through the Ministry of Defense and its major budget, and through oil revenues and development and construction projects in Saudi Arabia.

In addition to canceling all that was established and planned during the reign of Abdullah, these two councils will control Saudi decisions in all fields.

Saudis who sympathize with the Muslim Brotherhood are aware that serious changes had been made in the Riyadh administration concerning Sunni political Islamic movements such as the Muslim Brotherhood in Egypt, al-Islah party in Yemen, Hamas in Gaza and Ennahda in Tunisia. Further changes had been made in the movements’ supporting countries, such as Turkey and Qatar, which do not pose a threat to Saudi security. One of these changes include Mohammed bin Nayef choosing Doha as the destination of his first foreign visit after his appointment as Saudi crown prince. Turkey, where there are many Islamists, was his second destination. More recently, Mohammed bin Salman's June 12 visit to Qatar confirmed this trend.

Relations between Qatar and Saudi Arabia under Abdullah were tense following Riyadh’s March 2014 decision, along with Bahrain and the UAE, to withdraw their ambassadors from Doha because of the latter’s hosting of Muslim Brotherhood leaders.

This means that coordination with Abu Dhabi through the supreme committee on political Islam, formed in May 2014, has become a thing of the past. This is why Riyadh is seeking to regain its leadership role away from Abu Dhabi in a regional movement to calm the atmosphere and unite the Arab and Islamic ranks that Salman referred to in his recent March speech about the state political project. Neither the Brotherhood nor the supporting states will be exempted from the awaited reconciliation process, which has effectively started with Qatar, Turkey and Sudan, according to Salman.

In spite of the internal stability in Salman's reign, and despite the absence of an internal rival or opposition to the rule of Al Saud so far, the fourth Saudi state does not seem good for the grandchildren. The security and military crises on the northern and southern borders and the fiscal deficit in the general budget that seems to be growing as a result of falling oil prices and large excesses in public expenditure as well as the delay in the implementation of political reform are all thorny problems facing the fourth Saudi Arabian leadership.

However, the major challenge that the king of the fourth phase will have to face is to satisfy or contain dozens or even hundreds of princes with financial and political ambitions. The king might also have to face the lack of a clear mechanism, agreed upon by all members of the royal family, to organize the power-transfer process and the selection of a crown prince, especially since the Allegiance Council’s prerogatives and the age order of succession among the sons of the founding king have been overstepped. These issues have been addressed by some members of the Allegiance Council over social media, such as of Prince Talal bin Abdul-Aziz, the brother of Salman, and Prince Saud bin Saif al-Nasr, King Saud’s grandson.