Changes in Saudi Defense Ministry a matter of family politics

The leadership of the Saudi Ministry of Defense is being reshuffled quickly, indicating an effort to concentrate power and influence in the hands of the sons of King Abdullah bin Abdulaziz. 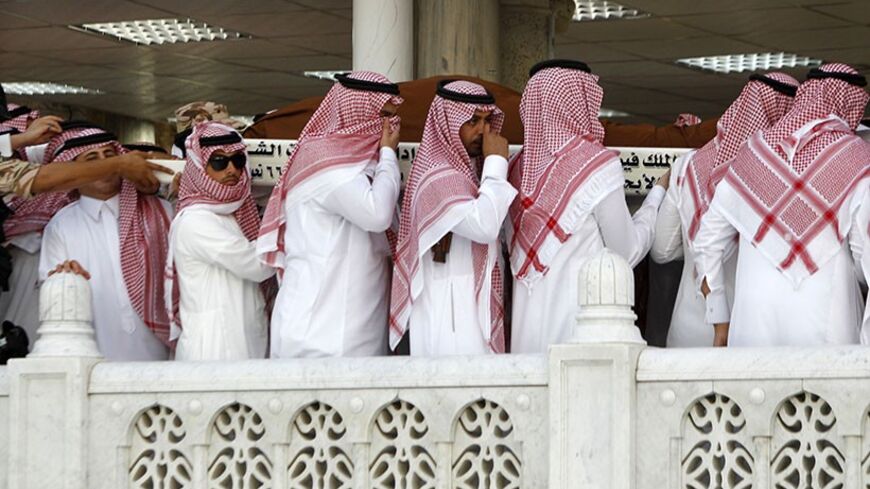 The preliminary steps of the “white coup” are proceeding gradually in Saudi Arabia. However, the pace has accelerated in the past few weeks, suggesting that the transfer of power is imminent. Observers cannot but stop and ponder the frequent reshuffling in the position of deputy minister of defense.

Just over a year ago, Khaled Bin Sultan, son of late Crown Prince Sultan bin Abdulaziz, occupied the position. However, following the death of his father and his uncle Nayef coming to power as the crown prince in October 2011, a decree was issued on April 20, 2013, to dismiss Khaled and appoint Fahd bin Abdullah bin Mohammed bin Abdul Rahman al-Saud. The appointment lasted only a few months before Fahd was dismissed on Aug. 6, 2013, and replaced by Salman bin Sultan. Yet, Sultan's other son fared no better than his brother as deputy defense minister, as he lasted in the position no longer than nine months. On May 14, 2014, Salman was also removed — “by his own will,” as he insisted. Prince Khaled bin Bandar bin Abdul Aziz was appointed in his place.

Thus, four people filled this position within a span of one year and one month. This is not normal, accidental or coincidental. This is a clear indication of an acceleration in the Saudi Arabian succession. Another major step in this direction came March 27, as Prince Muqrin bin Abdulaziz al-Saud was appointed deputy crown prince, making him the future king in the line of succession after his two brothers, current King Abdullah bin Abdulaziz and his Crown Prince Salman.

The transition to the second generation of sons is being accelerated in two ways: removing the sons of former kings and crown princes, especially the Sudairis, and concentrating the positions of power and influence in the hands of the sons of the current King Abdullah and his closest associates. This is happening gradually and with great care.

This subtle repositioning explains the arrival of four princes to the position of deputy defense minister in just over a year. This position had been monopolized by the Sudairis, with Sultan remaining in the Ministry of Defense for half a century. It was not possible to take this position away from the family in a single step. Thus, it had to be done over four different stages. The position was reshuffled between brothers and their close associates until it was possible to allocate the seat to someone else entirely.

This is how the switch took place: The position was transferred from the son of Sultan, Khaled, to Fahd, who is close to him. After Fahd, the position was given to Khaled’s brother until Muqrin came to office. Then the transition accelerated. The position was lost to the Sudairis and their close associates, and Khaled bin Bandar, who is close to the sons of the current king, was appointed. Taking the position from the Sudairis was accompanied by a series of appointments to military positions, including the chief of staff of the armed forces and leader of the air and naval forces. There were also changes in the land forces, including the land forces commander-in-chief, who was replaced on April 15. This move indicates that the “military coup” was carried out peacefully and totally within the Ministry of Defense. The current apparent heir and defense minister, Salman, has become just a figurehead.

A quick look at the most recent appointments in the kingdom shows that the sons of the late Kings Faisal and Fahd, late Crown Prince Sultan and the current heir apparent are being pushed out of key positions. The most famous and influential son of Sultan, Bandar, was removed from his intelligence position on April 15 and replaced by a non-royal military figure, Yousuf bin Ali al-Idrissi.

This will make Bandar a mere employee, not a partner in power as a prince. His brother Khaled was removed from the position of deputy defense minister and was left without any executive power. His other brother, Salman, was dismissed from the National Security Council and then from the Ministry of Defense and left without a role. Their other brother, Faisal, was appointed emir of the Medina region, which is seen as second-tier in terms of power.

The same phenomenon can be seen in the sons of Faisal, Fahd and Salman. Prince Mohammed, son of late King Fahd, was removed from his position as governor of the Eastern Province on April 25 and his other brother, Abdul Aziz, was removed from the cabinet.

Khaled, the son of King Faisal, was removed as the emir of Mecca and instead appointed minister of education, a position that has never been seen as one of the kingdom’s strongest. His more prominent brother, Saud, is still the minister of foreign affairs, but has became surrounded by newly appointed ministers that strengthen the influence of the sons of Abdullah. On July 23, 2011, the son of the current king, Abdulaziz, became deputy minister of foreign affairs, a ministerial rank. It is said that many of the ministerial portfolios rest in his hands. Another son of Abdullah, Turki, was appointed deputy emir of Riyadh on Feb. 14, 2013, also a ministerial rank. However, on May 14, 2014, he became the emir of Riyadh.

The third son of the king, Mutaab, is the most powerful and influential today. On May 27, 2013, he was appointed head of the Saudi Arabian National Guard, after the king’s decision to turn this unit into a ministry and appoint his son to lead it. Meshaal, the king’s fourth son, became governor of Mecca on Dec. 21, 2013.

Thus, the main positions of power have been moved out of the reach of the sons of Faisal, Fahd and Salman and transferred to the sons of Abdullah. However, the sons of late Crown Prince Nayef remained in their positions. His son Mohammed continues to be the minister of interior, a very influential position in the kingdom. His brother Saud is still the governor of the Eastern Province. So is this an indication of an alliance between the sons of Nayef and the sons of Abdullah emerging in the next phase? Or is it just a tactic to single out their opponents? Is this cooperation with Nayef only transitional, until the rest of his cousins can be removed? The answers to these questions will emerge with the coming days — sooner rather than later, it seems.

It appears that the health of the king and his heir apparent could explain the accelerated paving of the way for the big shift. It is very likely that Saudis will wake up one day to the news of the resignation of King Abdullah and Crown Prince Salman, and find Muqrin king and Mutaab crown prince. Thus, for the first time since the founding of the kingdom, the road will be open for the transfer of power to the third generation of the Al-Saud family dynasty that has ruled the country since 1932.